In a surprisingly fun goalless draw, Inter managed to survive the attacking attempts of a very direct Eintracht. During the first half, Inter’s defense won most of the aerial duels and prevented Eintracht from creating danger. However, in the second half Eintracht dominated individual duels and pinned Inter against their goal, creating some chances, but not scoring.

Luciano Spalletti’s Internazionale faces rough times. Their 2019 league form has been troubling, with two wins, two draws, three losses, playing against mostly lower and mid-table opponents. These negative results have led to archrival AC Milan overtaking them in the league table and also put the coveted Champions League spot in jeopardy. Things were made even worse by the contract renewal crisis of star forward Mauro Icardi, which has caused further instability to the team. Inter usually have a slower possession game that struggles to disorder rivals, with the team often resorting to brute-force crossing into the box to create chances. This strategy has become less effective in the absence of Icardi, which has certainly affected Inter’s results.

Against Eintracht, Spalletti and Inter lined up in the usual 4-2-3-1 shape. Apart from the absence of Icardi, Inter’s offense also suffered from the absences of Radja Nainggolan and Keita Baldé due to injuries. The goal of Samir Handanović was defended by Kwadwo Asamoah, Milan Škriniar, Stefan de Vrij, and Danilo D’Ambrosio. Midfield featured a double pivot  of Matías Vecino and Marcelo Brozović with Borja Valero in front as attacking midfielder. In the forward line, striker Lautaro Martínez was flanked by wingers Matteo Politano and Ivan Perisić.

Using a very direct 3-4-1-2 / 3-5-2 setup, the Eintracht of Adi Hütter have become one of the teams to watch in Europe. While other teams prefer slower build-up phases, Eintracht often attempt to play vertical passes through the opponent’s defense right away. This approach is riskier and leads to more turnovers, but when the passes succeed, opposition defenses quickly break down in disarray. Perhaps the main reason this approach works is Eintracht’s notorious forward trio of Sebastien Haller, Ante Rebić, and Luka Jović. All three forwards are great players individually, but together their mobility and great mutual understanding can genuinely take down any rival in the Bundesliga.

Against Inter, Eintracht lined up utilizing a nominal 3-5-2 shape. Kevin Trapp featured between the posts, while the back three was made up by Martin Hinteregger, Makoto Hasebe, and Evan N’Dicka. The central midfield trio was comprised of Gelson Fernandes, Mijat Gacinović and Sebstian Rode, flanked by Filip Kostić and Danny da Costa as wing-backs. Up front, the striker duo of Luka Jović and Sebastien Haller was picked, as Rebic was unavailable for this game due to a minor knee injury.

As stated earlier, Eintracht are very direct, and a significant part of their attacking game depends on winning the aerial duels and second balls that follow long balls (which usually come from keeper Trapp). This is reflected in their numbers, as they are the team who win the most aerial duels in the Bundesliga.

The best way to explain Eintracht’s relative lack of attacking threat in the first half of this game (only five shots, two of them outside the box) is that Inter won nineteen aerial duels against Eintracht’s ten. Except for the usual aerial excellence of Haller (five aerial duels won in the first half), Eintracht was struggling to win duels against a strong Inter back four and double pivot. It was thus harder than usual for Eintracht to construct good attacks. Five out of Inter’s ten shots during the first half came from corners and indirect free kicks, where Inter defenders managed to beat Eintracht’s defenders in the air.

Another important aspect that helped Inter’s defense was the natural numerical superiority that their 4-4-1-1 defensive block had against Eintracht’s 3-5-2 on the wings. Despite the best efforts of Jović and Haller to drift wide, Eintracht’s wing-backs were often at a disadvantage against Inter’s fullback plus winger pairs. This made it harder for Eintracht to progress on the wings. Even when Eintracht managed to win aerial duels or link up their strikers and wing-backs, Inter’s defended their box well. Central defenders De Vrij and Škriniar often won their duels in the box and cleared incoming danger.

Following their usual playbook, Eintracht defended in a medium block, A medium block refers to a team that retreats in their own half out of possession, generally only disrupting their opponents some way into their own half.only pressing high during Inter’s goal kicks or after bad controls / passes during Inter’s build-up phase. Haller and Jović pressed Inter’s central defenders, so Brozović often dropped in between them to help his team play out from the back. Eintracht midfielders Gacinović or Rode would then track Brozović when he dropped deep. 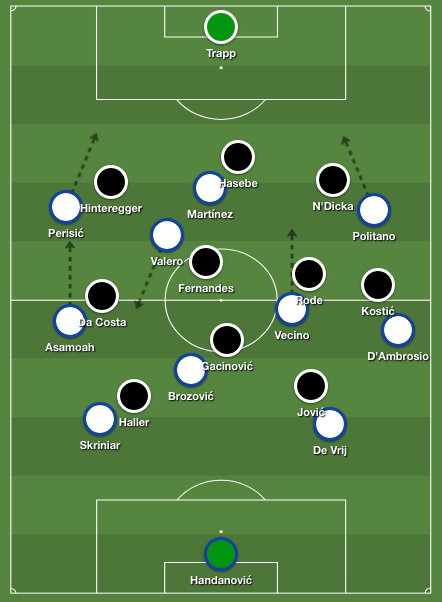 To make things worse, Inter’s attackers often pushed up instead of coming short to help the team play out from the back. As a result, Inter was often split in half during their build-up, with a large gap between the six deepest players (back four plus double pivot) and the front four. Unless Brozović made a miracle through ball to move forward, Inter was forced to reach their forwards with long balls and long passes into space. And just as Inter’s defense was dominant in the air, Eintracht’s defense also won most of their aerial duels against Inter’s forwards.

Inter’s best offensive advantage at the tactical level came, once again, on the wings. With Eintracht’s wing-backs pushing up during offensive phases, wingers Perisić and Politano could often run behind their backs and receive passes into space. Eintracht’s central defenders were often quick at moving to defend these situations, but from time to time an Inter winger would slip through.

All in all, it’s safe to say that both teams mostly nullified each other well during the first half, making it very hard to create chances from open play. 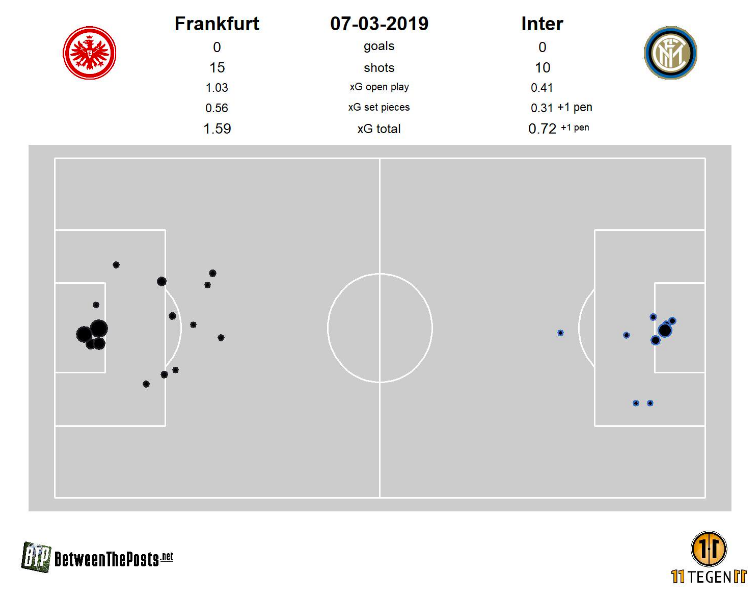 Eintracht dominates the air and the chances in the second half

The second half was an Eintracht monologue, with the home side outshooting their rivals by twelve shots to one. Sometimes, football is a simple game, as the key to Eintracht’s dominance, was winning aerial duels. Eintracht won most of those  in this second half (twelve against Inter’s six), and that meant they were often in better positions than before to create chances. Eintracht also pressed more aggressively, making it easier to win second balls. Inter was barely able to progress outside their own half of the pitch and simply had to endure the attacking prowess put on display by the home side.

At the same time, Eintracht looked for alternate pathways to get the ball to left wing-back Filip Kostić, who is their main chance creator outside of the forwards. We saw several instances of defender Hinteregger trying diagonal passes to Kostić, who calmly waited out wide and in between Inter’s defensive lines. These receptions in between the lines were particularly dangerous because Kostić had enough time and space to run at defenders and beat them. Defender N’Dicka pushed up and Eintracht’s strikers drifted wide to form passing triangles with Kostić that allowed them to overload When one team has more players in a certain area or zone than the other team.Inter’s right flank. 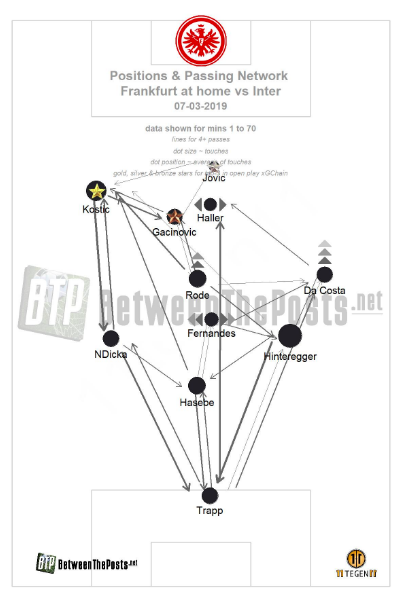 Spalletti attempts a last-ditch change to a back three

At the 80th minute, Spalletti replaced midfielder Borja Valero for defender Cedric and switched to a 5-4-1 defensive shape. Cedric became the right wing-back, D’Ambrosio became a central defender. The aim of this change was to fight Eintracht’s superiority in individual duels with numerical superiority in defense. Eintracht’s two strikers would now have to fight against Inter’s three central defenders.

However, the change further broke down Inter’s ability to play out from the back. There was a bigger gap between Inter’s defense and offense, so Eintracht’s midfielders and forwards had even more space now to run at Inter’s defenders. Eintracht was now able to attack freely through the center lanes and severely threaten Inter’s defense, which is why they generated several shots in the final minutes of the game. Inter’s defenders managed to clear most of the danger, but a few big saves from Handanović were also needed for Inter to survive this ordeal.

In the absence of top passing talent at Eintracht, coach Adi Hütter has opted for verticality and one-versus-one duels to disorder opponents. As shown in the first half, Eintracht is far from a perfect team. Their approach carries more risk, their chance creation depends a lot on wing-backs and forwards, and if their players are not winning individual duels things can get rough. However, the benefits of Eintracht’s directness ultimately outweigh the drawbacks, which is why they have gotten good results this season. Despite their initial resistance, Inter ultimately succumbed to Eintracht’s directness, and only a good defense of the box and Handanović’s shot stopping prevented them from scoring.

Inter might be relieved for getting a draw in their away leg, but the result is probably more positive than their actual performance. Thanks to an excellent defensive line, Inter managed to at first nullify and later survive Eintracht’s attack. However, if Inter wants to win the second leg they will need a more functional attack that can bypass Eintracht’s pressing or at least win more aerial duels against Eintracht defenders. Perhaps if Nainggolan can return from injury, that will improve Inter’s ability to win physical duels. Whatever it will be, Inter need a solution, because it’s clear that what was tried in this first leg (including the back three setup) will struggle to give good results in the second leg. 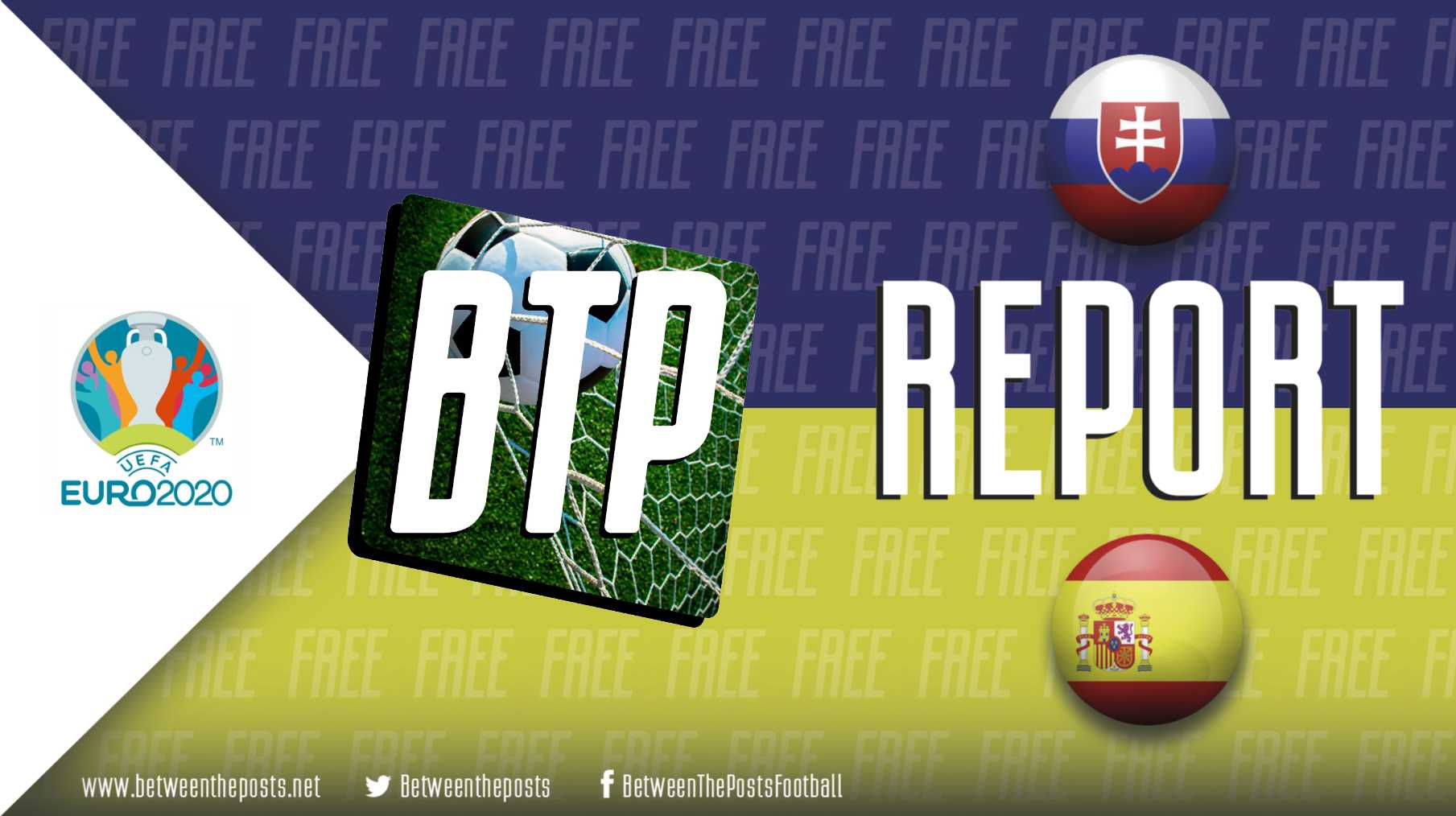