Dortmund dominated possession in the first half but failed to create dangerous situations, while Inter used their only real chance to take the lead. Dortmund’s good possession game improved even more in the second half and caused Inter serious problems, but eventually their defense was good enough to retain the lead. In the end, a counterattack led to the second and decisive goal.

It was expected that Inter and Dortmund would fight it out for the second place in this group, behind Barcelona. However, Inter drew against the supposedly worst team in the group – Slavia Prague – on matchday one, and lost away at Barcelona. For that reason, with Dortmund earning four points in the first two matches, Inter  hadto win this game in order to keep their chances of qualifying for the knockout stage up.

Antonio Conte fielded his 3-1-4-2 formation with the familiar names in the lineup. Compared to their win over Sassuolo in the weekend, the Italian manager made two changes. Diego Godín returned to the lineup and Kwadwo Asamoah started as left wing-back instead of Cristiano Biraghi.

On the other side, Lucien Favre surprisingly changed his system. Instead of the 4-2-3-1 shape Dortmund use for the majority of games, he opted for a 3-4-3 formation. Due to the missing of Marco Reus (ill) and Paco Alcácer (injured), the front three consisted of Jadon Sancho, Julian Brandt and Thorgan Hazard. The wing-back positions were filled by the athletic players Achraf Hakimi and Nico Schulz. Usually a defensive midfielder, Julian Weigl started between Manuel Akanji and Mats Hummels as third center-back.

Inter used a 5-3-2 shape, often positioning themselves in a medium block A medium block refers to a team that retreats in their own half out of possession, generally only disrupting their opponents some way into their own half. against the ball. Dortmund tried to outplay this compact block through attracting pressure on one side and then switching to the other. Usually, the attacks started on the right through Akanji. He found a diamond shape in front of him, but Inter were mostly able to stay compact and deny progress. Dortmund, however, used these situations to attract Inter to one side, in order to then switch the game through Weigl and Hummels to the left side. 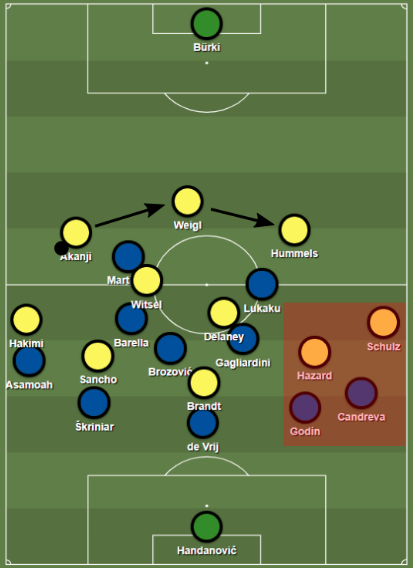 Dortmund attracted Inter to one side and tried to exploit them on the other.

They did this very well, especially Weigl’s buildup play was often world-class. After switching the ball to the left, Hummels often found himself in a space where he could advance with the ball. In front of him, Hazard and Schulz were in a two-versus-two situation against Antonio Candreva and Godín. In the beginning of the match, Dortmund often tried to exploit these situations, but failed to do so.

During the course of the first half, Dortmund discovered a new strategy to outplay Inter’s defensive scheme. Because of Hazard’s position in the halfspace, If you divide the field in five vertical lanes, the halfspaces are the lanes that are not on the wing and not in the center. Because there is no touchline like on the wing, players have the freedom to go everywhere. But this zone often is not as well-defended as the very center. This makes it a very valuable offensive zone to play in and a lot of chances are created by passes or dribbles from the halfspace. Roberto Gagliardini had to close this space first. Romelu Lukaku’s behavior against the ball was questionable most of the time. He tried to pressure Hummels from the back to deny passes to Weigl, but all this did was open up spacein front of the midfield. Thomas Delaney and especially Axel Witsel made a good job in positioning in these spaces to switch the ball to the other side again.

Dortmund tried to start combinations between the wing-back and the offensive player on the wing, but could not progress the ball any further, and were simply unable to start dynamic situations where they attacked the defenders. The biggest chance in the first half resulted from a diagonal pass to Brandt in the center, who played Sancho through, but his shot was saved by Samir Handanovič

Sancho’s chance originated from a kind of attack that Conte likes to see from his side. A diagonal pass from the wing-back between the lines, in the feet af a dropping striker, who plays through another player that makes a run into depth. Inter were not able to pull off any kind of good combination, though. In possession, they set up in a 3-1-4-2 formation, where the wide center-backs Milan Škriniar and Godín stayed very deep and were very passive with the ball.

Dortmund looked for central compactness in the center, with their defensive 5-4-1 formation, not pressuring Inter’s buildup. The Italian side had possession spells where they passed the ball from one wing to the other wing. Dortmund’s wingers made a good job pressuring the respective wing-back and denying passes into the center by using their cover shadows. When a player is positioning himself between the opponent that has possession of the ball and another opponent, he is blocking the passing lane. When applied the right way, his ‘shadow’ is effectively taking the opponent in his back out of the game, because the pass can not be played. To keep up the central compactness, Witsel and Delaney rarely shifted to the wings but stayed in the center, knowing that Inter would look for high balls into Lukaku. They dealt well with these balls to recover the ball. 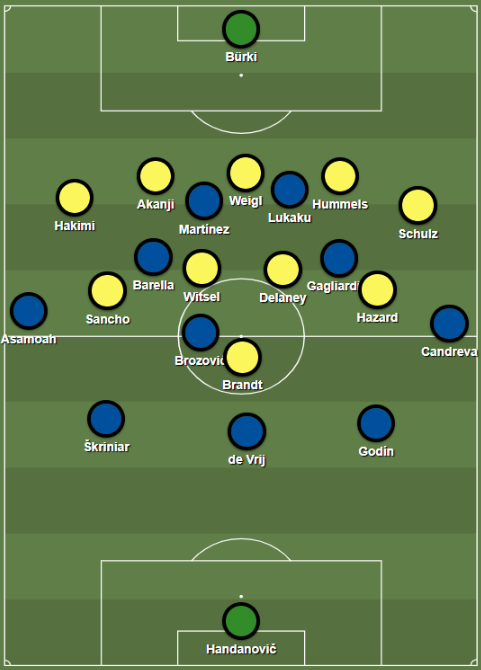 Inter were unable to create chances against Dortmund’s compact defense.

In the origin of the first goal, Dortmund’s overly passive strategy backfired. Inter used a combination on the left wing to attract Brandt and open the center, which was eventually used by Stefan de Vrij. Nico Schulz was caught sleeping as he ruined the offside trap created by his teammates. De Vrij’s chipped pass over the defense was converted by Lautaro Martínez after 22 minutes.

In the second half, Dortmund remained the dominant side and were still able to use their good buildup with attracting and switching. Lucien Favre’s adjustment were seen in the way Dortmund used their switches. Delaney and Witsel were positioned in front of the midfield and shifted to the ball-near side. Therefore, Inter’s midfield had to shift to this side, too. That opened the ball far halfspace that was occupied by Hazard or Sancho. They dropped back from a higher position with the wingback moving up. Through this movement, Inter lacked access in that halfspace and Dortmund used the dynamic of the overlapping When a wide player, most of the times a wing-back, runs outside to fill in the space left by a winger going inside with or without the ball, this is called overlapping. wing-back. 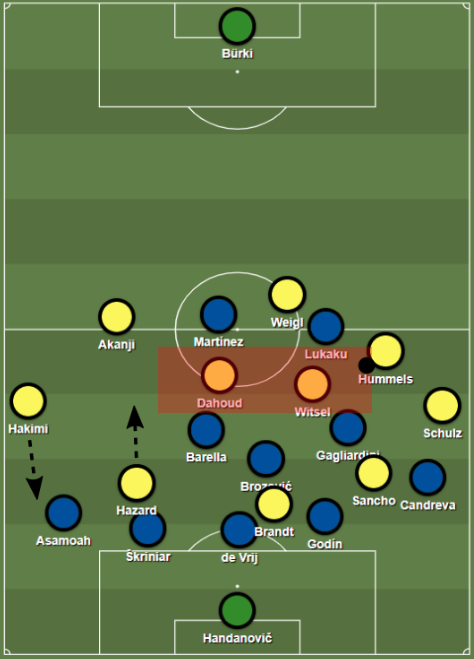 As a consequence, Dortmund had more situations around the opposition’s box but Inter’s defensive players were was too strong after all and could clear the situations. Even if Dortmund were able to progress through the wings, the midfielders did a good job in dropping back into the box to heavily outnumber Dortmund’s attackers in the central zone in front of the goal. Lucien Favre’s side are famous to rather wait for the good shooting opportunity to arise than to take a hopeful shot. As a consequence, Dortmund’s actually good attacking play resulted in only five shots.

Because Dortmund were in and around Inter’s box more often, they did not keep the long possession spells like in the first half. Their attacks were more dangerous, but ended faster as well. For that reason, Inter had more and longer possession spells in the second half. They still faced the same problems they did in the first half, but having the go-ahead goal in the pocket, they were not forced to create dangerous situations.

Dortmund had to be more active against the ball as well. They used more pressing situations in a high block and looked to recover the ball earlier than before. The wingers did not solely focus on staying in a compact block any more, but stepped up to pressure the center-backs. That resulted in more open spaces on the wings that were closed by either Witsel shifting to the left side or Hakimi moving up on the right side. With their problems in possession, Inter were not able to exploit these situations.

Favre changes the formation and Inter decides the game

In their 5-4-1 formation, Dortmund were able to stay compact. However, they did not have the pressing trap they use in the 4-2-3-1 formation to deny the opponent’s longer possession spells by isolating them on the wings. With twenty minutes to go, Jacob Bruun Larsen came in for Akanji and Dortmund switched to the nominal 4-2-3-1 shape. They tried to create chances by overloading When one team has more players in a certain area or zone than the other team. on side with all their offensive players. However, the quality of their positional play reduced as a consequence. The biggest chances came after counterpressing After losing possession, a team immediately moves towards the ball as a unit to regain possession, or at least slow down the pace of the counterattack.situations.

The counterpressing did not always work, though, and Inter had the chances to decide the game. First, Martínez missed a penalty in the 82nd minute, but Candreva sealed the win with a successful counterattack seven minutes later. 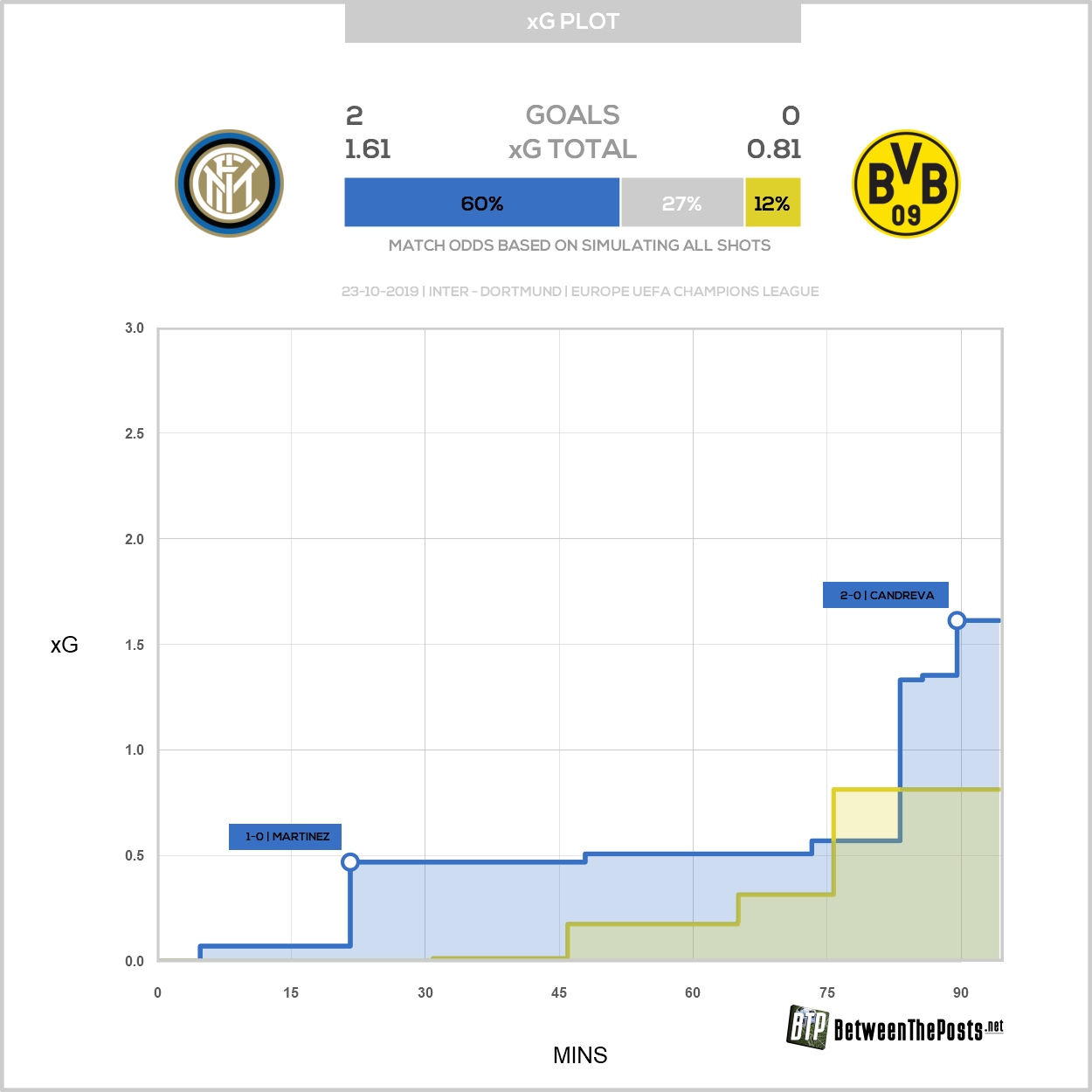 Dortmund were the better team and had the superior plan for this match. The switches in possession were well-played, but the team failed to create dangerous situations after these switches. Favre’s adjustment helped, but Inter had too many players in the box and cleared the situations.

All in all, Inter’s performance was disappointing. Their possession game was not able to exploit their opponent’s, although it has to be said that Dortmund’s defensive quality was very good in this match. In the end, a football game was decided by just fine margins. If Schulz would have paid more attention before the goal, Martínez would have been offside and the 0-0 would have likely stayed for a while.

With the win, Inter takes the second place in the group. However, getting at least a point in their match at Dortmund will be important for their chances of qualifying for the knockout stage. 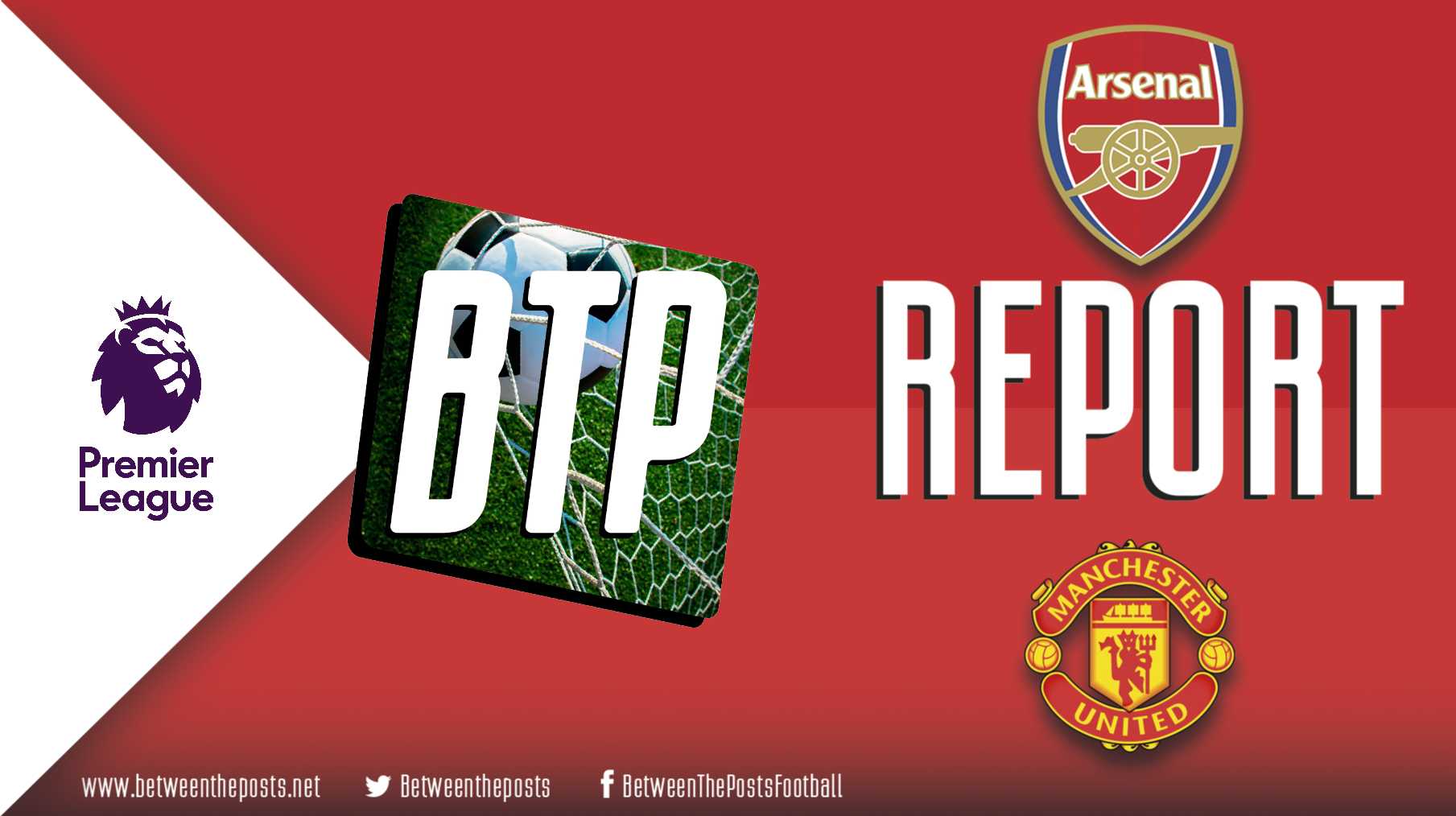