Liverpool – Chelsea: Underperformers Remain Mired In The Mediocrity Of Mid-Table (0-0)

Two excellent managers of two big clubs find themselves in an unusual predicament. Where one aims to conjure back up the essence of his greatness, the other is trying to impart his ideas in a demanding setting. Both of their collectives showed flashes, but frustration reigned supreme.

Graham Potter’s seagulls soared over the south coast, but the navigation of choppier waters at Chelsea is testing his willpower. Since the return to his old stomping ground at the end of October, his new charges have only picked nine from a possible 30 points, losing half of their last ten Premier League fixtures. Neither can he turn to domestic silverware for reprieve: his men were victim to Manchester City in the Carabao and FA Cup. It is a crisis to which the man in the opposite dugout can relate.

Jürgen Klopp has been dismissive of the seventh season curse, but he cannot pretend that Liverpool have been close to their best. Cody Gakpo has added to the depth of the offensive roster, but he cannot solve all their woes. The blunter edge of their high pressure and a lack of control in the middle of the park rendered them perfect prey for Brighton to pounce on. Evidence of such hunger has been scarce from the ‘mentality monsters’— and time is now running out to salvage any fruits from this campaign.

To bounce back from one of the worst days in his time as the Liverpool manager, Klopp switched up his selection. Half of the outfield players from the Amex lost their spots. James Milner came in for Trent Alexander-Arnold, while Joe Gomez joined Ibrahima Konaté in central defense. Fabinho and Jordan Henderson missed out, making way for Stefan Bajčetić and Naby Keïta. Harvey Elliott, who scored the only goal in a FA Cup tie in midweek with Wolves, replaced Alex Oxlade-Chamberlain.

Chelsea’s rut ended with a 1-0 victory over Crystal Palace last week. Potter duly stuck to all but one member of the starting eleven he picked for that fixture. Benoît Badiashile, one of the club’s winter signings, sat next to Thiago Silva. Trevoh Chalobah was on the right edge of the backline, while Marc Cucurella pushed Lewis Hall higher up the field. Jorginho, Mason Mount, and Conor Gallagher were in the center of the park, Hakim Ziyech featured on the right flank, and Kai Havertz stayed upfront.

Within five minutes, the visitors nearly had a perfect opening to the contest. Badiashile made the first contact from a set-piece delivery, teeing up Silva. He hit the post before Havertz tapped home the rebound beyond Alisson. However, the forward’s left leg was offside. Liverpool were off the hook.

They took heart from that element of fortune. A 4-4-2 diamond pressing structure to close central access failed against Brighton, and Klopp fell back on the classic 4-3-3 system. Their opponents set up on the ball in a 3-4-2-1 formation with the same asymmetry from the match against Palace. Chalobah stayed wide and deep, while Cucurella moved higher to offer width on the left. Ziyech fulfilled this role on the right, while a pivot of Hall and Jorginho sat behind Mount and Gallagher.

The dynamic between these two structures was costly in the Carabao Cup. A lack of compactness let Manchester City’s box setup in the middle of the park exploit the gap between the front two units of the pressing scheme. That weakness was much less of an issue in this clash. Liverpool displayed much more constant ball pressure, trapping, and baiting at the heart of their success under Klopp.

Chelsea’s solution focused on the dynamic on the right flank in a similar way to City. If Elliot set himself narrow in the halfspace to protect Thiago, Chalobah could pick up the ball on his outside shoulder. Ziyech would then come low to receive. His deep width dragged our Andy Robertson from the backline, and Gallagher made an underlapping run in the channel to stress the rest of the defense. However, poor positioning and quality on the ball capped the damage the visitors could inflict. 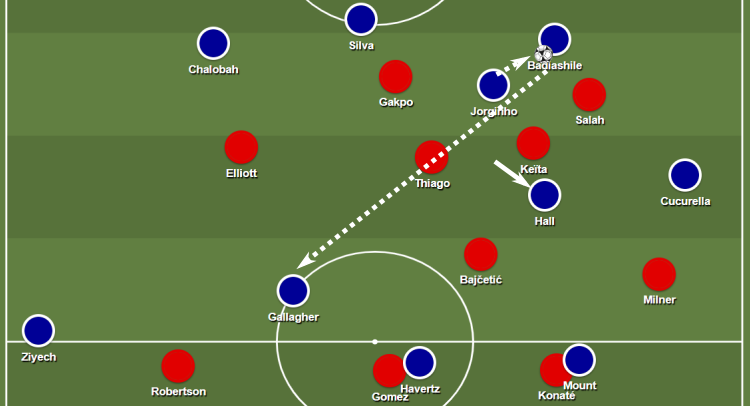 21st minute: buildup sequence from Chelsea. A possible solution to escape the pressure was through loading one halfspace with both members of the double pivot. Here, Hall moves away from the ball and Jorginho drops diagonally to receive behind Gakpo, who tried to deny the switch through Silva instead of blocking the passing lane. Jorginho can swivel on the ball, force Keïta and Salah to retreat, then bounce a pass back to Badiashile. The central defender then clips the ball over to Gallagher.

Potter’s systems are never sure before kickoff. The inclusion of Hall and Cucurella cast doubt over whether he would opt for a back four or five without the ball. In the end, he plucked for the latter. Chalobah stayed narrower to pursue Elliott and Ziyech dropped to offer more cover on his outside. 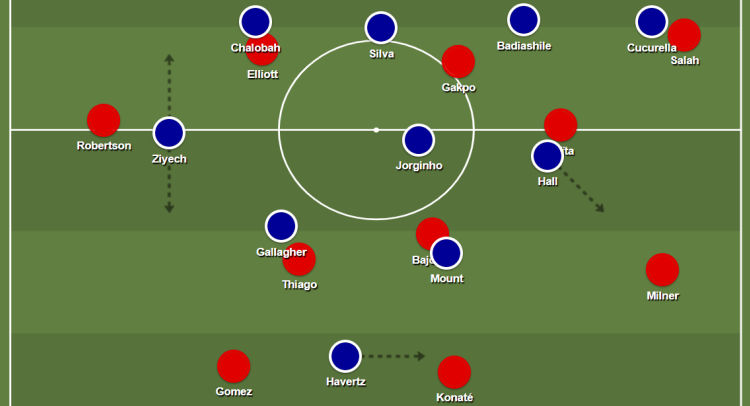 Chelsea’s asymmetric defensive system. Ziyech floats between the position a right winger and right wing-back depending on the position of the ball and Robertson. Gallagher moved out to Thiago as the deeper of Liverpool’s two central midfielders and Hall moved out to cover any advances from Milner.

From the front, Havertz split the two central defenders. Mount marked Bajčetić but broke away from the midfielder if a lack of ball pressure allowed Konaté to step forward and create better connections with his teammates. From here, Chelsea could more predictably shift to their left, look to deny passing lanes into the midfield, and use their superiority at the back to try and shut down Liverpool’s offense.

Switches were possible areas of frailty. Liverpool broke forward more easily on the right, where Cucurella, whom Salah occupied, was lower than Ziyech. Gakpo roamed to the halfspace to get into the game while Milner, Salah, and Keïta rotated. But the dense center and man-orientations in Chelsea’s block rarely were under too much duress. The scoreline was 0-0 at the halfway mark.

Liverpool flew out of the traps after half time. Attacking the Kop End, they pinned Chelsea in their half of the field for most of the first ten minutes following the restart. Potter turned to one of his latest recruits to turn the tide back in his favor. Mykhailo Mudryk donned the blue shirt for the first time, replacing Hall. The visitors duly switched to a back four; Ziyech and Mudryk operated as the wingers.

The interaction between Hall and Jorginho had not worked optimally before the break. Repeatedly, the academy graduate caught himself too close to his senior teammate. So, instead of making the most of the box in the middle of the park, Chelsea could end up fixed to one side of the field. Gallagher dropped deep in the left halfspace to support, but Jorginho now had the freedom to roam solo at the base of the midfield. Double width pinned Liverpool’s fullbacks and deep fullbacks forced the wingers to sit off wider. An injection of quality supported the effect of this structural switch.

Mudryk’s dynamism and decisiveness in the final third were telling. He spurned a chance at the back post from a classic Ziyech cross, but Milner was in for a long half hour. In the 64th minute, he nearly broke the deadlock in stellar style. Link-up with Gallagher and nimble feet in the penalty area crafted a shooting lane, but he hit the netting to the outside of Alisson. The duel continued to open up from here, but neither contestant had the finesse to match what would have been a magnificent moment.

A point at Anfield to add to last week’s victory ought to have eased the pressure on Potter, but Chelsea still languish in tenth place. It was a display that indicated he was not short of ideas. Switches in shape and intent in structure could have earned all three points if the execution were at a higher standard. New signings litter the squad of a relatively new manager in the post: time is not a commodity his predecessors have tended to receive, but it is what Potter will require to have a chance to succeed.

Klopp is also figuring out the best way to use his squad. Gakpo is unfamiliar with the demands of a central forward, Darwin Núñez has been bright with channel runs on the left, and other options are missing. But the big money names should not steer attention from an issue that has hurt Liverpool lately. Their pressing and intensity were much better in this showing, but good ball management to keep up pressure and stay in connection with other teammates is an area where they must improve. 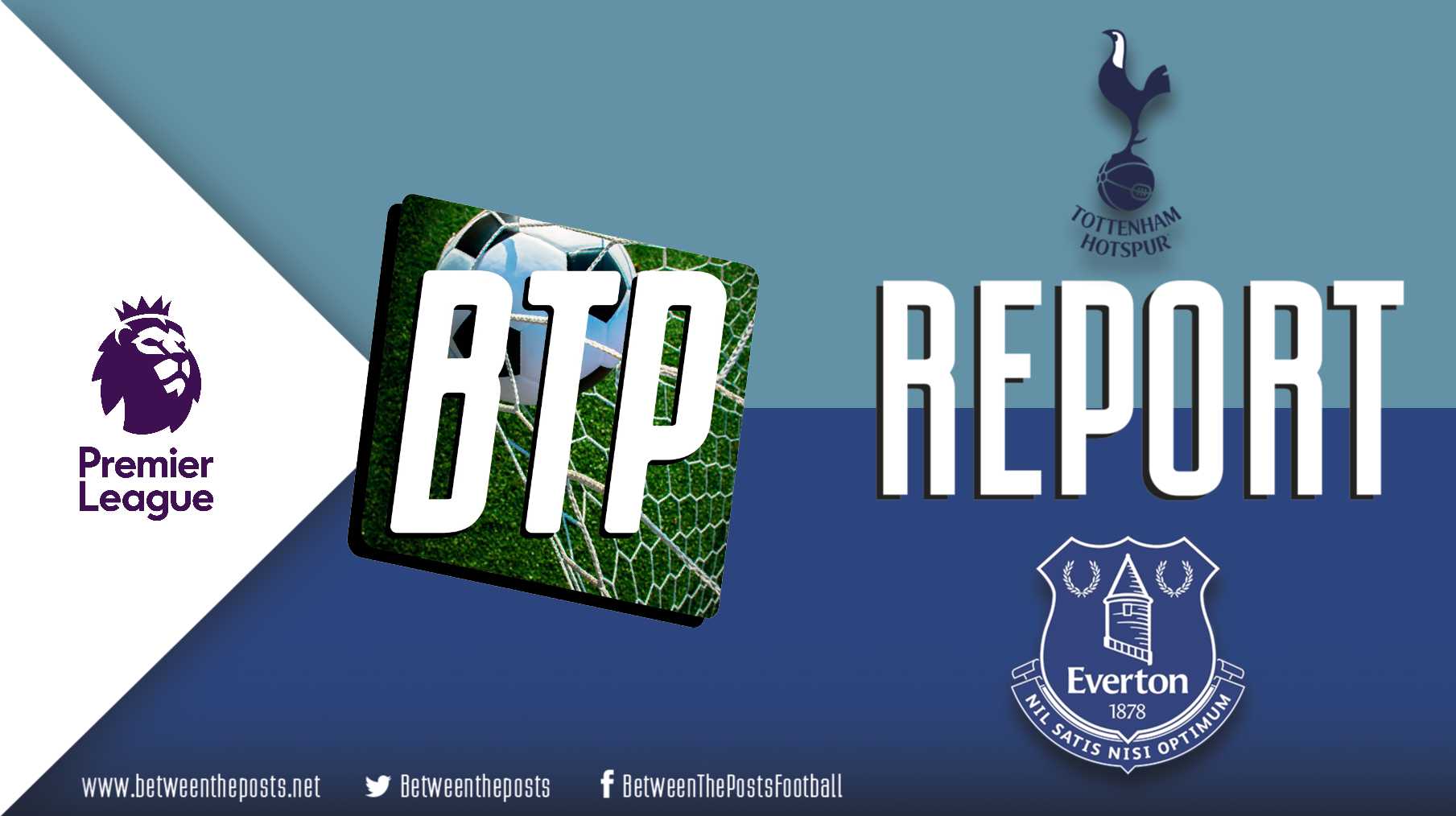 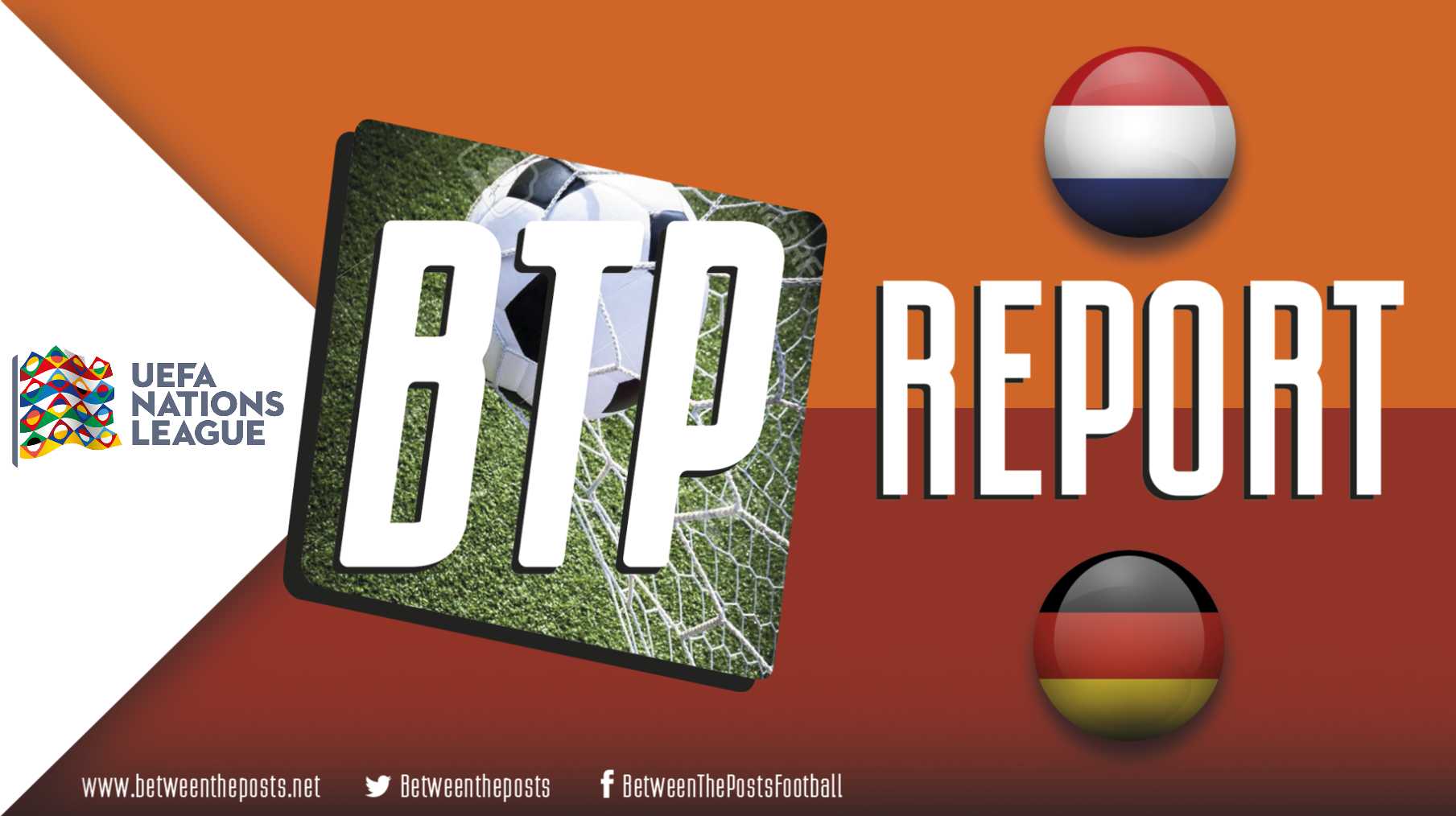