A very early goal from Harry Kane invited Spurs to try and shut up shop early on and defend deep against Liverpool. Spurs’ defending became perhaps too passive though, as Liverpool were able to dictate possession and constantly switch the play with little pressure. Eventually Liverpool’s dominance paid off, as Jordan Henderson and Mohamed Salah got on the scoresheet for the home side to prevail 2-1.

Liverpool’s winning start to the season came to an end last week as they dropped points away at Manchester United with a 1-1 draw. They got back to winning ways in midweek though as they defeated Genk in the Champions League group stage.

As was the case in midweek, Liverpool’s front three of Mohamed Salah, Roberto Firmino and Sadio Mané started up front in this game. Jürgen Klopp also tried something different in midfield in midweek as Alex Oxlade-Chamberlain and Naby Keita flanked Fabinho in midfield in their 4-3-3 formation.

For this game though, Klopp went back to a tried and tested formula of Jordan Henderson and Georginio Wijnaldum as the midfield partners for Fabinho. In defense, Trent Alexander-Arnold returned after missing out against Genk.

Spurs’ 5-0 victory over FK Crvena Zvezda in their Champions League fixture was a welcome result from their point of view after the terrible few weeks they have had on the pitch. However, it might take more than that to restore the confidence of this side after humiliating defeats against Bayern Munich and Brighton.

For this game, Mauricio Pochettino went for a 4-3-3 system. Moussa Sissoko, Harry Winks and Dele Alli were the central midfield trio. Ahead of them, Christian Eriksen and Son Heung-min played from the right and left respectively, supporting the lone striker Harry Kane. 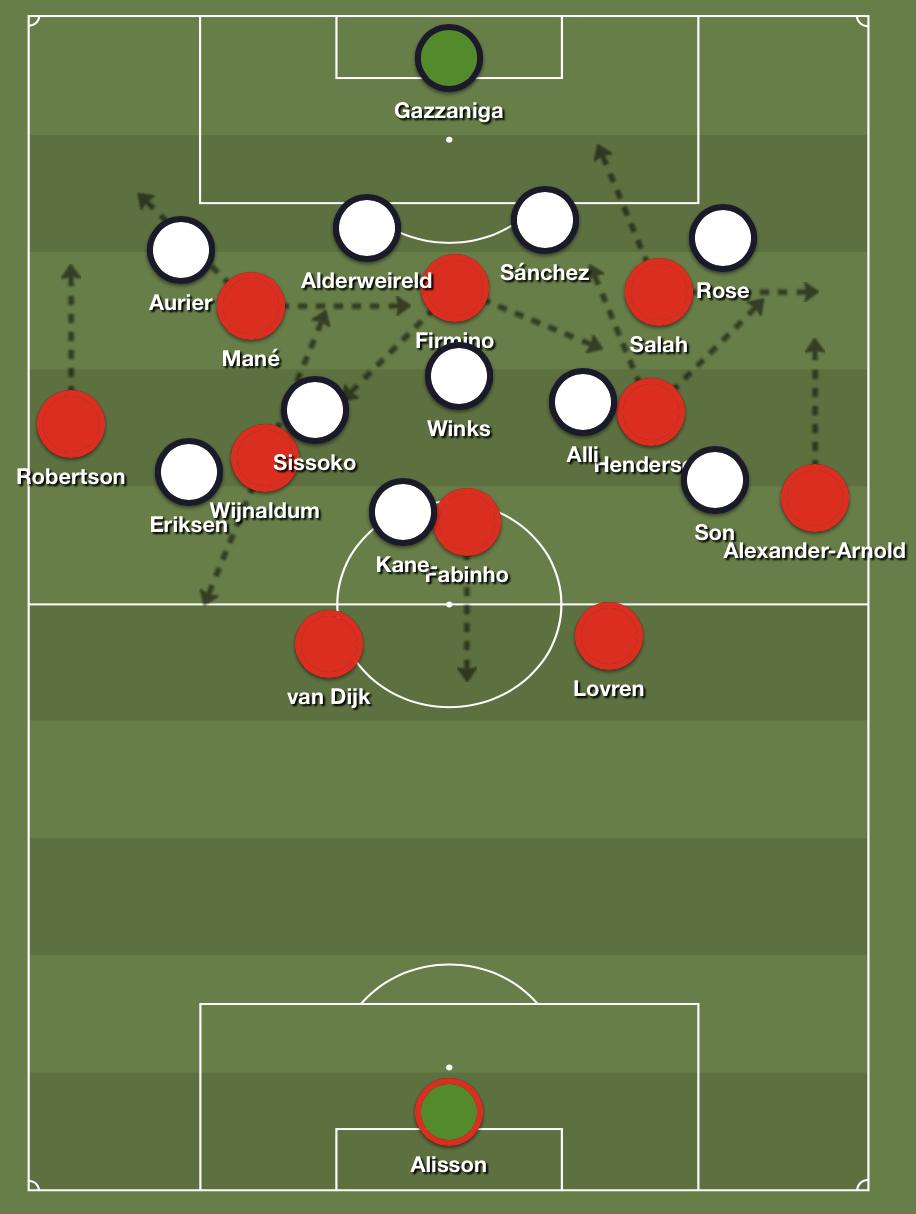 The match had barely started when Spurs were able to get themselves an early lead. In the opening exchanges as both teams played direct, Sissoko was able to pick up the ball in midfield and skip past a couple of Liverpool challenges. He then found Son, who’s shot deflected onto the post, and Kane collected the rebound to put Spurs 1-0 up.

For most of the game after this point, Spurs set up in a low block A low block refers to a team that retreats deep in their own half out of possession, generally only disrupting their opponents around their own box. 4-5-1 shape, as Liverpool applied increasing pressure against their defensive line. Liverpool meanwhile attacked in their usual 4-3-3 formation, committing often very high numbers of players forward against the passive defensive structure of Spurs.

Andrew Robertson was primarily responsible for providing the width on the left side, Mané often drifted quite far inside to occupy central areas alongside Firmino. Mané’s involvement on the left often came from late runs from inside to outside once Robertson had already collected the ball and attracted pressure from Serge Aurier, creating space behind the fullback for Mané to run into.

On the right side, Henderson again took a relatively aggressive role in terms of his offensive positioning, which seems to be a trend now. He often made runs into depth, either vertically or from inside to outside.

Henderson, Salah and Alexander-Arnold had quite a fluid relationship on the right side, as all three players could be holding the width on the right at different times. Henderson and Salah meanwhile rotated between the wing and attacking right halfspace, If you divide the field in five vertical lanes, the halfspaces are the lanes that are not on the wing and not in the center. Because there is no touchline like on the wing, players have the freedom to go everywhere. But this zone often is not as well-defended as the very center. This makes it a very valuable offensive zone to play in and a lot of chances are created by passes or dribbles from the halfspace. while Henderson would also drop back when Alexander-Arnold moved forward in order to provide balance. 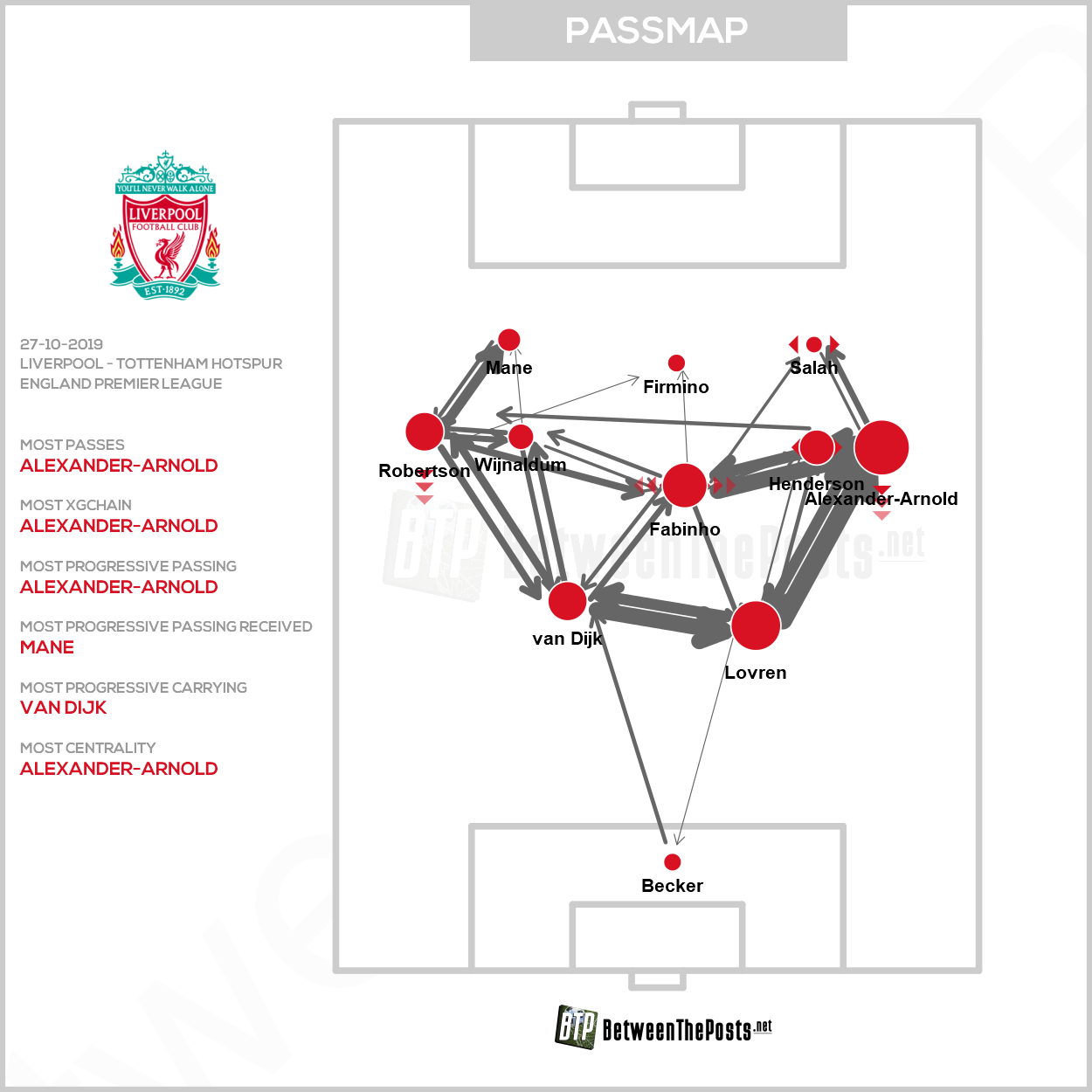 Spurs first of all applied very little pressure against the buildup of Liverpool around the halfway line. Liverpool would often form a diamond between the center-back, Fabinho and one other player during buildup. The other player was usually a fullback or central midfielder.

Increasingly though, due to the passivity of Spurs’ defensive block, Liverpool felt comfortable to leave only three players back in the first two lines of buildup, often just Virgil van Dijk, Dejan Lovren and Fabinho.

Kane would rarely pressure the center-backs, and instead tried to stay close to Fabinho, while he found difficult as the game went on. Fabinho in the end was able to exert quite a large positive influence on Liverpool’s game.

The three central midfielders for Spurs would rarely jump up to assist Kane against the Liverpool buildup. They were instead focused on maintaining small distances between each other in order to prevent line-breaking passes into the feet of Liverpool’s forwards in central areas.

In this respect they were relatively successful. Firmino in his classic false nine A striker that constantly drops deep and plays like a number ten. role drifting between the lines struggled to get quality service into his feet in these positions due to being held in the cover shadows When a player is positioning himself between the opponent that has possession of the ball and another opponent, he is blocking the passing lane. When applied the right way, his ‘shadow’ is effectively taking the opponent in his back out of the game, because the pass can not be played. of Spurs’ midfielders.

The lack of pressure on Liverpool’s buildup though meant that they had large amounts of time on the ball to pick out passes for the runs of the forwards and fullbacks. In particular, Liverpool were able to find success with switches of play to either fullback, but especially from right to left with Robertson on the receiving end. Eriksen seemed uncomfortable in executing his defensive duties on this side.

This success was in part due to the positioning of the Spurs wide midfielders. They were usually positioned in relatively narrow positions, slightly higher than the central midfielders. The narrowness gave more space for Liverpool’s fullbacks, and the slightly higher position meant that Eriksen and Son had a more difficult recovery run when the ball inevitably went to the fullbacks. 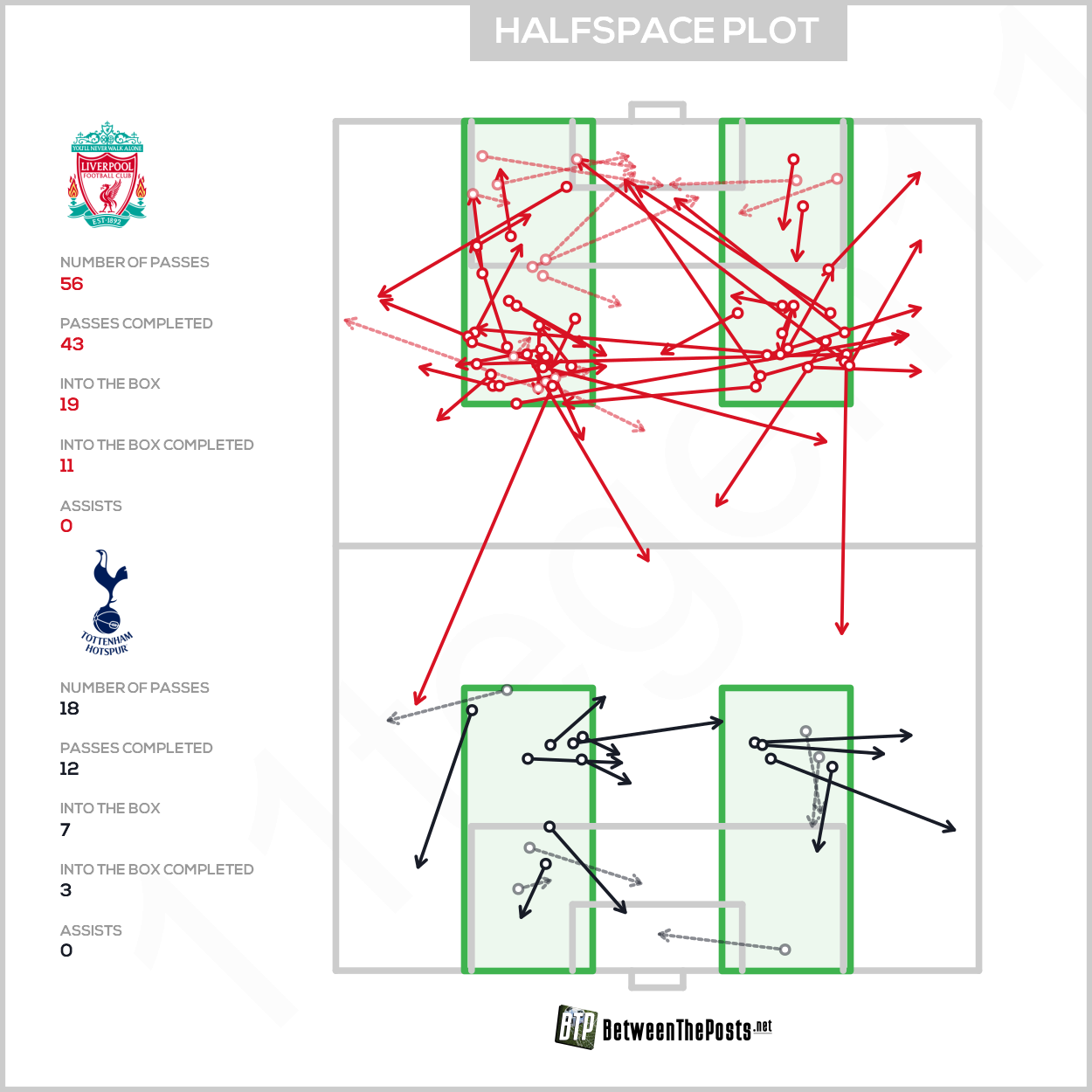 Overall the positioning from Spurs’ wide midfielders was slightly strange. It is understandable that they want to maintain defensive connection with the nearest central midfielder, but they were probably slightly too focused on this, meaning Liverpool found it too easy to access the fullbacks, or whichever player was occupying the width at that time.

Once Liverpool worked the ball wide, the Spurs fullback would often end up being the one to pressure the ball, which opened the opportunity for Liverpool to get behind them with inside to outside runs as alluded to with Mané previously.

From here Liverpool could then put crosses into the Spurs box from dangerous positions. Liverpool were generally less successful when they tried to work the ball into the center from these positions as Spurs’ midfield line packed out the central space in front of the box and made it difficult for Liverpool to play intricate combinations through these areas.

Spurs unable to hold on

Spurs were able to survive until half-time with their 1-0 lead, but as pressure built from Liverpool throughout the first half, it seemed unlikely that Spurs would be able to go for another forty-five minutes without conceding, unless things were to change tactically.

A tactical change was not forthcoming though, and the game largely continued to follow the same trends and patterns that were seen in the first half. Spurs did however come very close to going 2-0 up on the counterattack just three minutes into the second half, as Son’s rounded Alisson in the Liverpool penalty box, but his shot ended up hitting the crossbar.

A few minutes later at the other end, Liverpool were finally able to make their pressure pay off. Henderson’s left footed effort from near the corner of the six yard box found its way past Paulo Gazzaniga in the Spurs goal, making the score 1-1.

This goal did not significantly change the flow of the game, as Liverpool continued to push for a second goal as Spurs tried to resist the waves of attack. Pochettino tried to freshen up the midfield with the introduction of Tanguy Ndombele in place of Winks, which proved to be a decent move as the Frenchman put in a good performance in the circumstances.

What did change the flow of the game was Liverpool going 2-1 up with fifteen minutes left thanks to a Salah penalty, which was earned by Mané in an incident where Aurier did not cover himself in glory.

After this, Spurs came out of their shell somewhat, while Klopp looked to shut up shop for Liverpool. James Milner was introduced in place of Georginio Wijnaldum in midfield. Klopp then went further by switching to a 5-3-2 formation to protect against the numbers Spurs were throwing forward.

Salah was the attacker sacrificed, as Joe Gomez came on to enforce the defensive line. Spurs in the meantime brought on Lucas Moura and Giovani Lo Celso in place of Serge Aurier and Eriksen respectively. Spurs then had more attacking personnel and put pressure on Liverpool with some crosses into the box, but ultimately Liverpool held out to win 2-1. 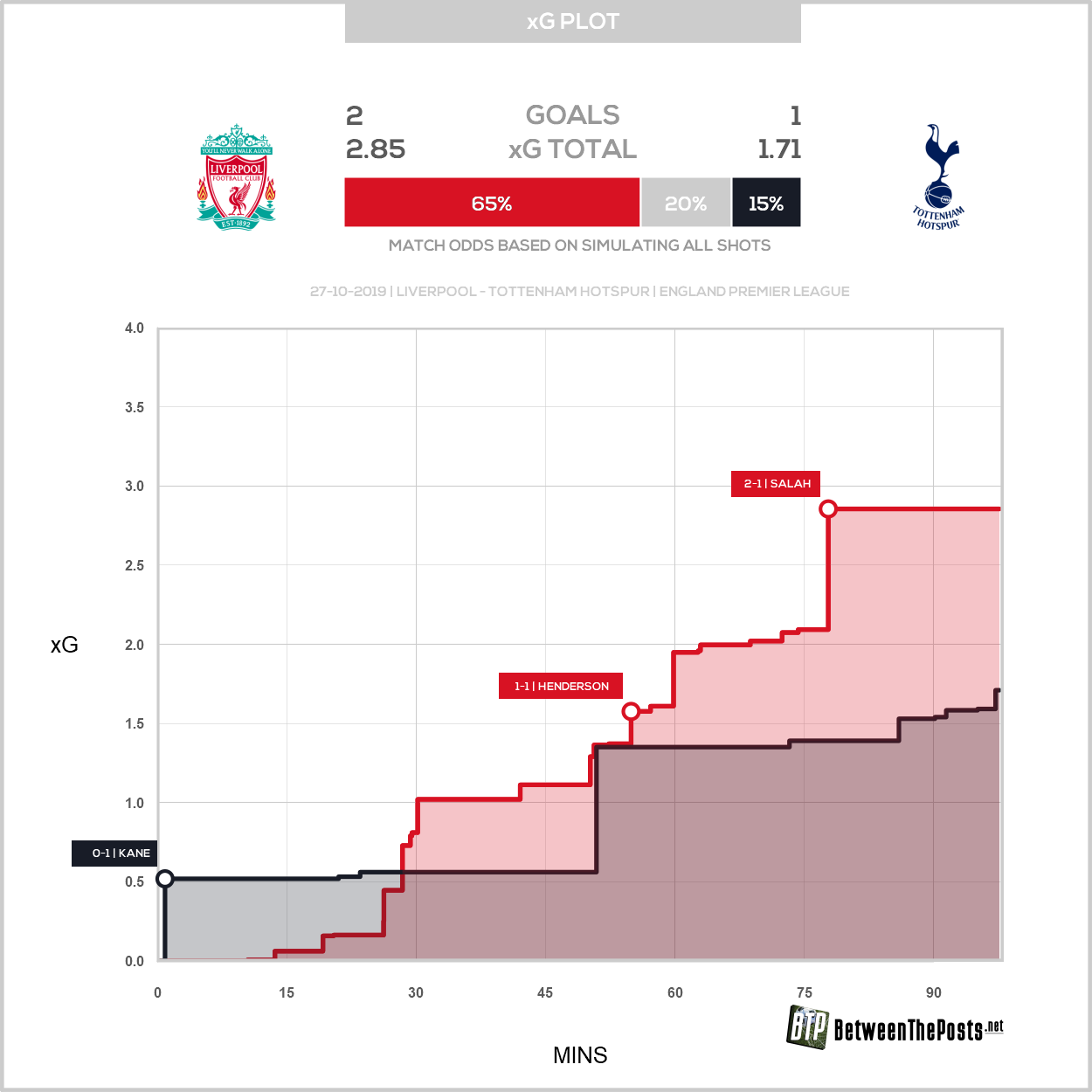 It is difficult to know how this game would have transpired had Spurs not gone ahead early, as it invited them to sit back and defend for most of the game as they did. If they had not gone ahead so early, might we have seen a different strategy?

Their defensive scheme looked to be working relatively well at first, but once Liverpool established a rhythm and began exploiting the wide areas with their talented fullbacks, Spurs were pretty much on the ropes the whole way through.

For Liverpool, they did what was necessary after going behind as they found the holes in Spurs’ defensive scheme and continued exposing them until they eventually got their rewards. The win sees them maintain their six point lead over Manchester City at the top of the table with ten games played. 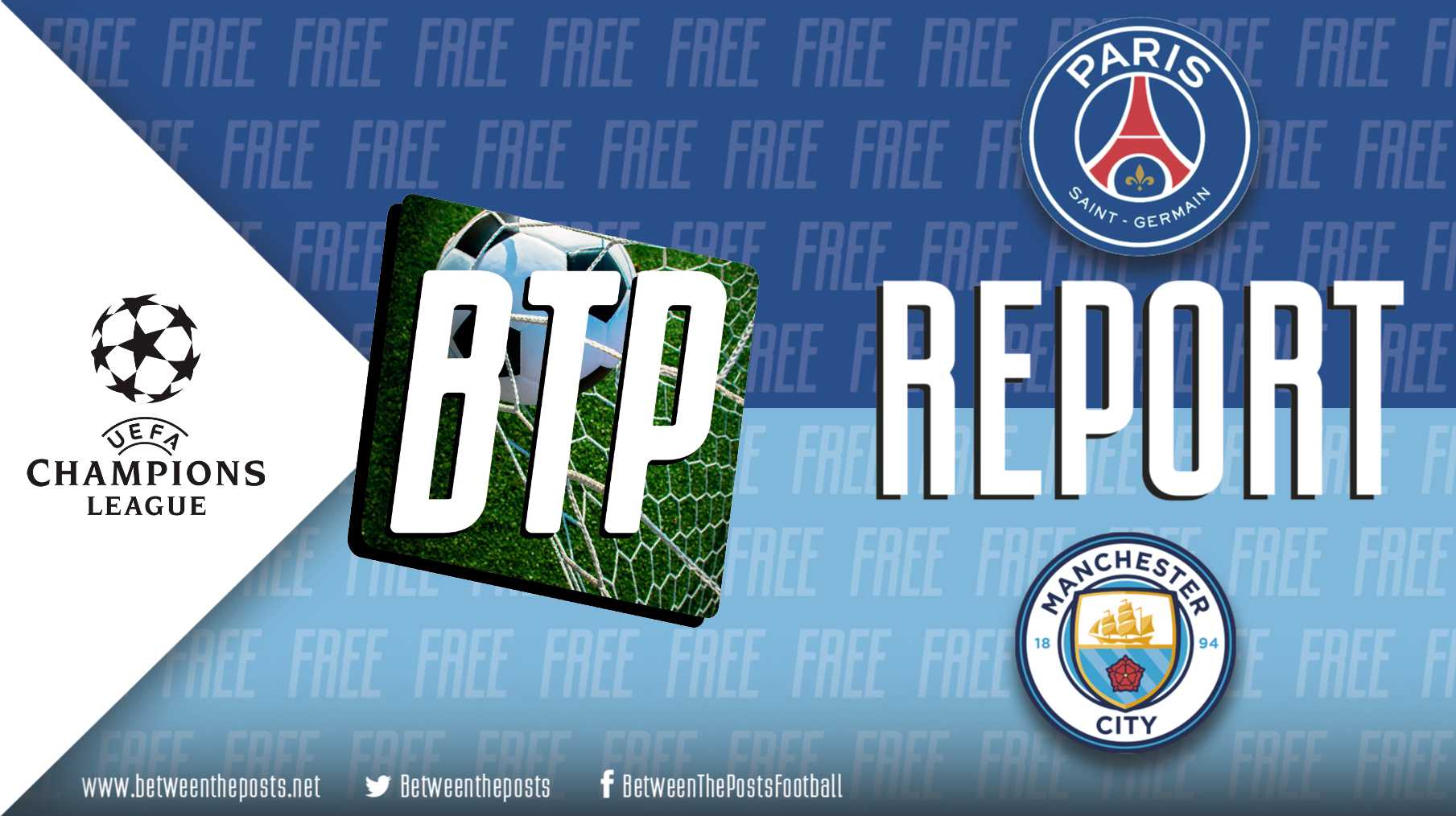