Tottenham started the game playing brilliant football but lost the initiative when they rolled back their press. Bayern capitalized on this thanks to the brilliance of Serge Gnabry and Robert Lewandowski rather than through particularly great collective play.

Much of what was said about Tottenham only a few weeks ago still stands. They remain weakened by injuries to Giovani Lo Celso – who has played only 44 minutes this season – and Tanguy Ndombélé – who looks only half fit at the moment – thereby exacerbating the overall burnout that has resulted from an intense tactical philosophy and an absence of signings last season.

Mauricio Pochettino has looked to adjust by severely curbing the amount of pressing that his side engages in. Some have argued that he has always modulated his team’s pressing intensity early in seasons so as to peak in the “important” months, but the numbers and visual evidence show a Spurs side that is pressing far less than usual. From the start of the 2018/19 Premier League season to the end of September, Tottenham recorded a PPDA Passes per defensive action is calculated by dividing the number of passes allowed by the defending team by the total number of defensive actions. figure of 7.46, which topped the table. Within the same timeframe this season, Tottenham’s PPDA figure is 9.84, which places them squarely in eighth.

Tottenham have also been characterized by an inability to control games ever since the departure of Moussa Dembélé and the decline of Victory Wanyama and Eric Dier. This began at the start of 2019 and led to Pochettino adopting a more chaotic model that sought to make use of his top-heavy squad in a 4-4-2 diamond formation. Pochettino chose this same shape versus Bayern Munich, going with a back four of Danny Rose, Jan Vertonghen, Toby Alderweireld, and Serge Aurier ahead of goalkeeper Hugo Lloris. Harry Winks played as the team’s ‘number six’ and was flanked by Moussa Sissoko and Ndombélé. Dele Alli sat at the tip of the diamond and Harry Kane and Heung-Min Son were deployed up top.

Bayern Munich were similarly troubled by a declining squad last season, seeing the end of the Franck Ribéry-Arjen Robben era and witnessing repeatedly poor performances from Manuel Neuer and Mats Hummels. But, unlike Spurs, their relative power remained unmatched in Germany and they snatched another league title. Though Niko Kovač has still not looked as entirely convincing as his predecessors this season, Bayern sit at the top of the table after six matchdays.

Much of this has had to do with the ridiculous form of Robert Lewandowski, who has already recorded a whopping ten goals in the league. Unsurprisingly, Kovač chose the Pole to lead the line versus Tottenham. Lewandowski was supported by attacking midfielders Kingsley Coman, new signing Philippe Coutinho, and Serge Gnabry. Joshua Kimmich and Corentin Tolisso formed the double pivot, 4-2-3-1 is one of the most frequently occurring formations in football. The two most defensive midfielders are called a ‘double pivot’. protecting a defense consisting of Benjamin Pavard, Niklas Süle, Jérôme Boateng and David Alaba. Manuel Neuer started in goal.

Notwithstanding their overall curtailment of the press, Tottenham still do apply high pressure in the opening stages of games. Against Bayern, Spurs’ diamond shape naturally overloaded When one team has more players in a certain area or zone than the other team. central areas and forced the ball wide. 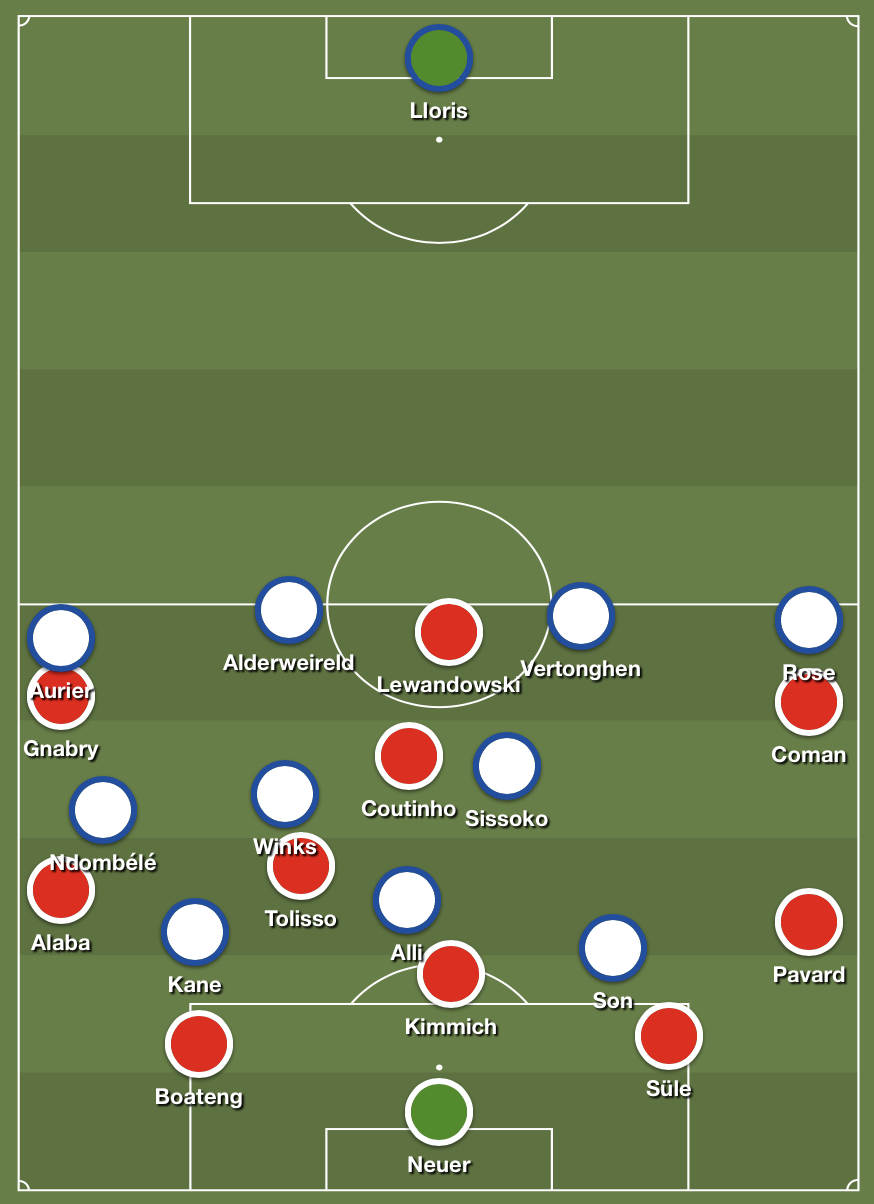 Once that happened, either Sissoko or Ndombélé would rush the opposition fullback, causing the entire midfield line to shift over and mark all nearby passing options. The fast-paced nature of the game and the constant switching between Kane, Son, and Alli created significant positional variation when pressing, but the basic structure remained relatively constant.

Tottenham’s execution and intensity were strong and succeeded in stifling Kovač’s buildup. This enabled Pochettino’s men to enjoy time on the ball and seek to disorder Bayern’s 4-4-2 defensive structure. 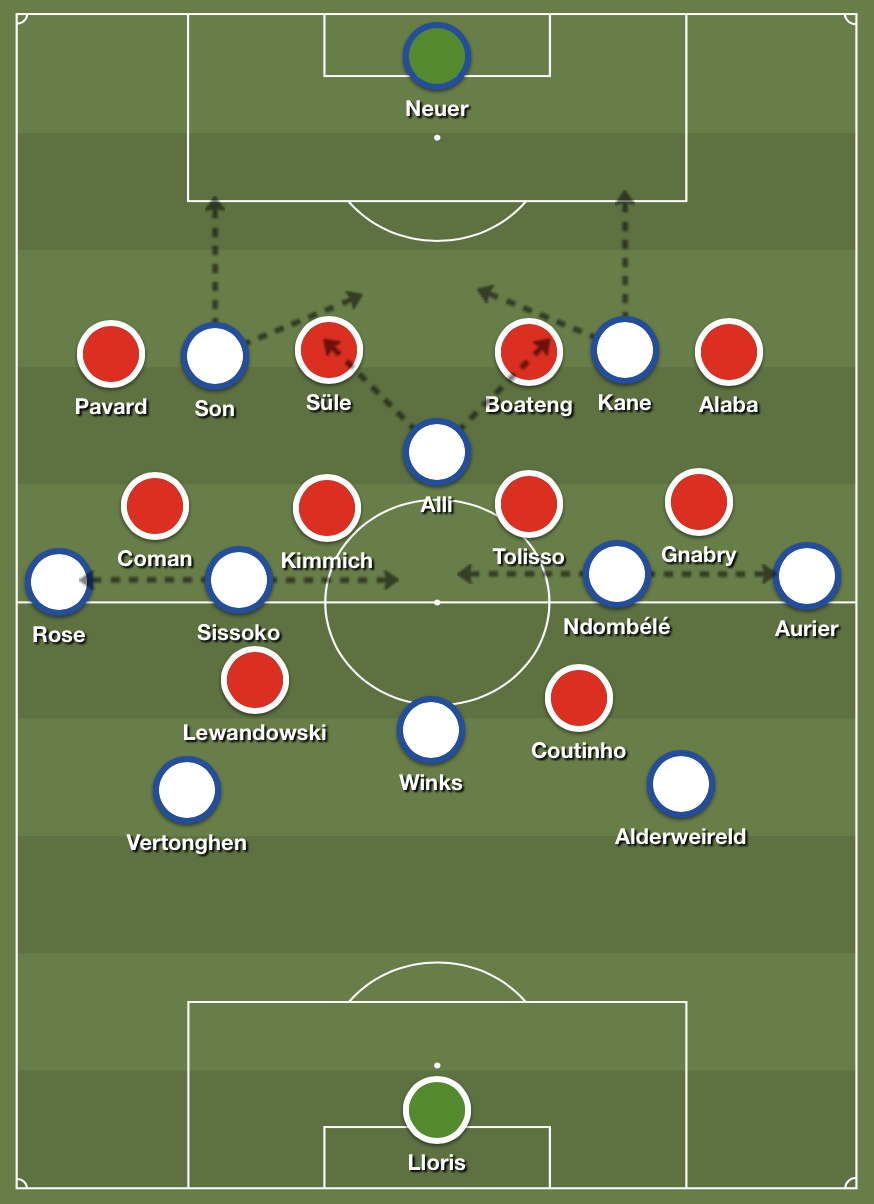 Bayern attempted to press too, with Gnabry, Coutinho, Lewandowski, and Coman marking Tottenham’s back four, but the presence of Tottenham’s midfield overload constantly forced the Germans back into a more conservative shape. Once that happened, Bayern’s midfield instinctively narrowed to deal with the aforementioned overload, creating opportunities for Tottenham to switch play A pass from one side to the other. to their advanced fullbacks.

Kane’s, Son’s, and Alli’s runs in-behind caused further trouble for Bayern and deterred Kovač’s defensive line from stepping up aggressively to congest the space between the lines. Son, in particular was a menace in the opening exchanges and ended up scoring a low, driven effort from the right-hand side of the box after a successful team press.

A few minutes after going up, Tottenham conceded thanks to a disorganized pressing effort; Kane dropped deeper, seemingly thinking Alli would press in his area. By the time the two had sorted out who was going to do what, Bayern had time to look up and switch play to the far side. The far side is the side of the pitch where the ball is not. This enabled Kimmich to release Coman over the top and force Spurs into defensive transition. Tottenham cleared the initial attack but Kimmich picked up the loose ball and scored from distance.

Tottenham’s pressing lasted roughly up until the half hour mark before gradually beginning to fade. While the offensive mechanisms described before still enabled Tottenham to threaten, the lack of pressure allowed Bayern Munich to have more possession.

However, the Bavarians did not create a lot of high-quality chances from their increased touches. Kovač’s rather rigid structure and emphasis on simple wing patterns did not do much to destabilize Tottenham’s deeper shape, and Bayern were limited almost exclusively to shots from outside the box.

By all metrics and observations, Tottenham were the superior side in the first half; but, in the 45th minute, Lewandowski struck with a moment of sheer brilliance. First, he flicked a throw-in over the head of Vertonghen before lobbing a cross into the box. After both Aurier and Ndombélé failed to clear the danger, Lewandowski latched onto the ball at the edge of the box, spun around, and pummeled a shot into the bottom corner to make it 2-1.

As Spurs’ press faded in the first forty-five minutes, they began to shift into a flat 4-4-2 medium block A medium block refers to a team that retreats in their own half out of possession, generally only disrupting their opponents some way into their own half. with Dele Alli moving to the left flank. In the second half, Pochettino instructed Son to be the one who shifted to the wing – in this case the right wing – while Alli stayed up top with Kane.

In theory, this was not a poor defensive base, but uninspiring individual defense saw Tottenham fall further behind in the 53rd minute. With time and space on the ball, Süle, Tolisso, and Boateng shifted the point of attack to Pavard – Alaba had been substituted for Thiago in the 46th minute, moving Kimmich to the right back position and Pavard to the left – who played a one-two with Gnabry. Aurier was caught out and completely missed a desperate slide tackle, allowing Gnabry to race towards goal. The former Arsenal player cut inside past Alderweireld and blasted a shot into the far corner.

Two minutes later, Tolisso robbed Winks and set Gnabry free on the left-hand side of the box. Taking it first time, the winger calmly slotted his shot in off the post.

Tottenham were given some hope after Kane converted a penalty, which prompted them into a higher defensive stance. But without applying the pressure to match their nominally aggressive posture, Bayern found it too easy to play their way into their opponent’s half and control the game. Nevertheless, as mentioned before, Kovač’s rather basic offensive tactics limited his team’s ability to create quality chances, making it appear as if the game was destined to end without more goals.

Then, in the 82nd minute, Thiago played a long ball from deep in his own half. Gnabry raced onto the delivery and scored one-versus-one with Lloris to complete his hattrick. Four minutes later, Alderweireld needlessly gave away possession, causing Bayern to quickly counter and score through Lewandowski.

Not content with his earlier mistake, Aurier followed suit by committing a turnover that set Bayern forward on another counter. Gnabry was the beneficiary, this time, and he scored his fourth goal of the night with a beautiful strike from outside of the box to make it 7-2. 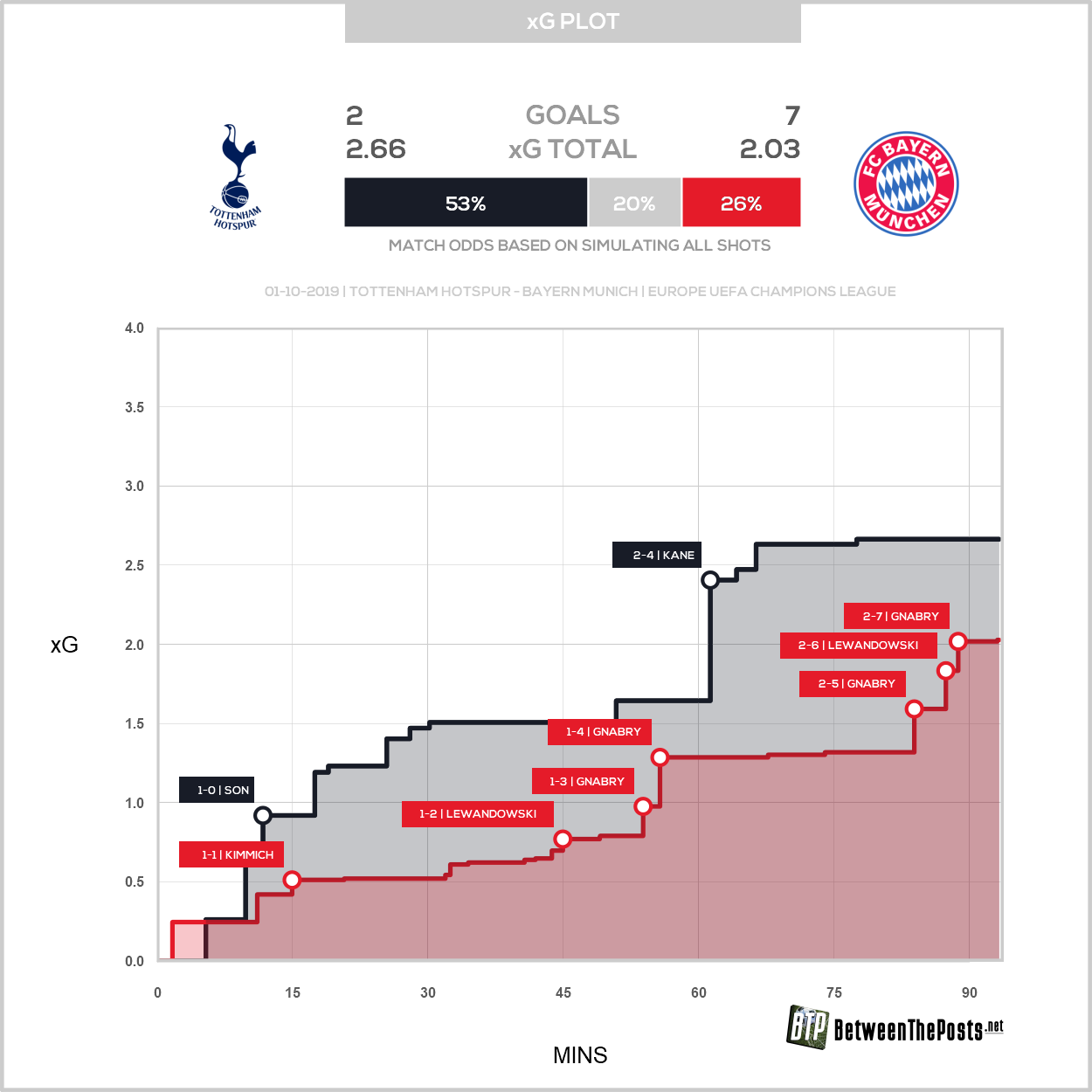 The expected goals The amount of goals a team is expected to score based on the quality of the shots they take. chart will show a far more even game than what the scoreline suggests, but that does not mean that Tottenham deserved to come away with a result. They played brilliantly for the opening half hour, but faded as their press melted away. Schoolboy errors from individuals simply compounded this. Given those mistakes and the context of Spurs’ fitness as a whole, it is hard to blame Pochettino for the way things turned out. But the Spurs faithful are getting restless and it is up to the Argentinian to find stop-gap solutions before the likes of Lo Celso and Ndombélé are fully fit and incorporated. That may mean drilling his side in deeper defensive blocks, which Spurs looked less capable in when compared to their high pressing in this game.

Bayern’s attackers were locked and loaded from the get-go and that will delight Bayern Munich’s supporters. However, it fits a pattern of individuals making up for Kovač’s uninspiring offensive schemes, which will give hope for the likes of RB Leipzig this Bundesliga campaign. Bayern are obviously still the favorites, but they could be even bigger ones if Kovač could make a tactical leap.

Use the arrows to scroll through all available match plots.
Check the match plots page for plots of other matches. 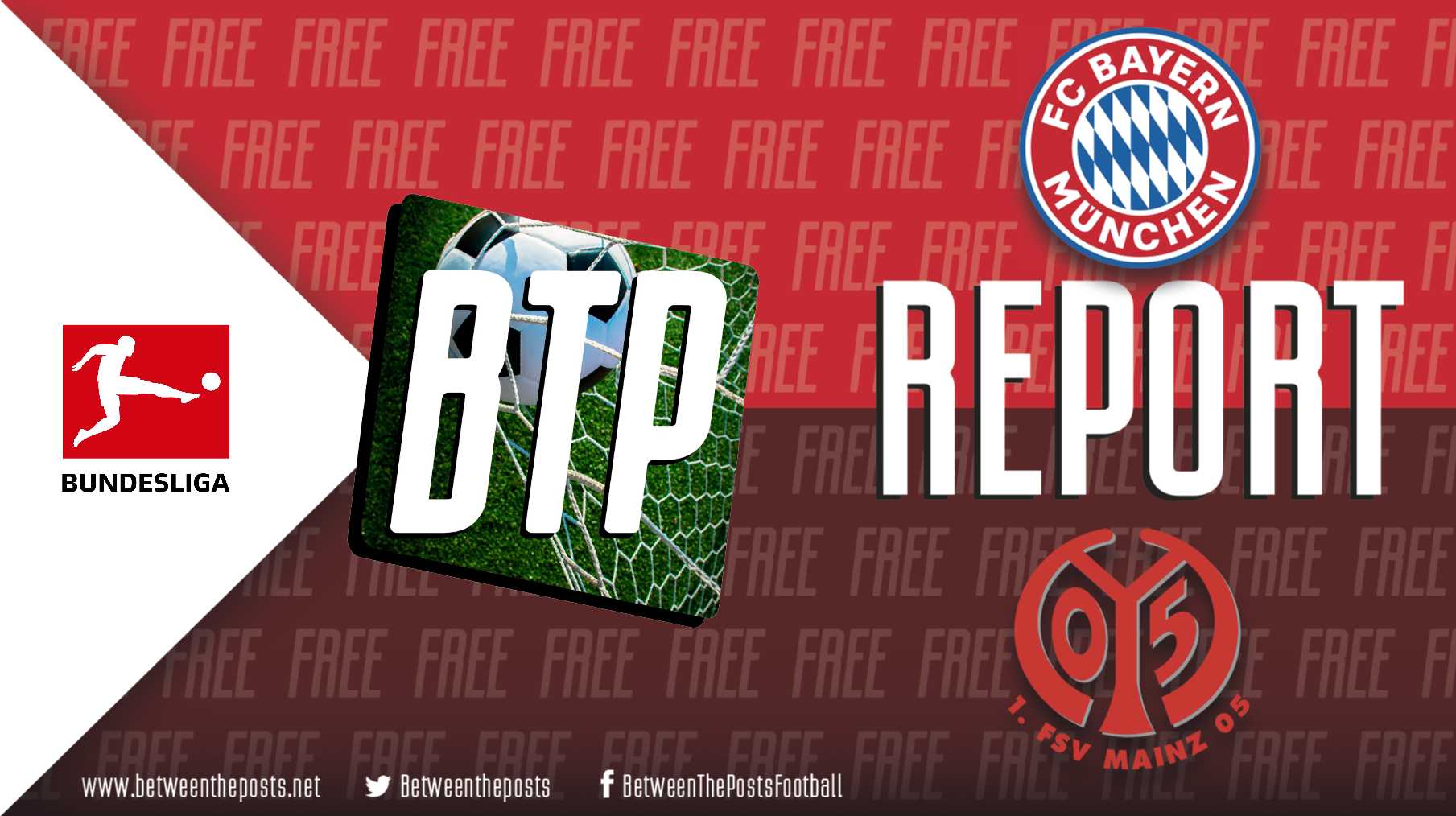 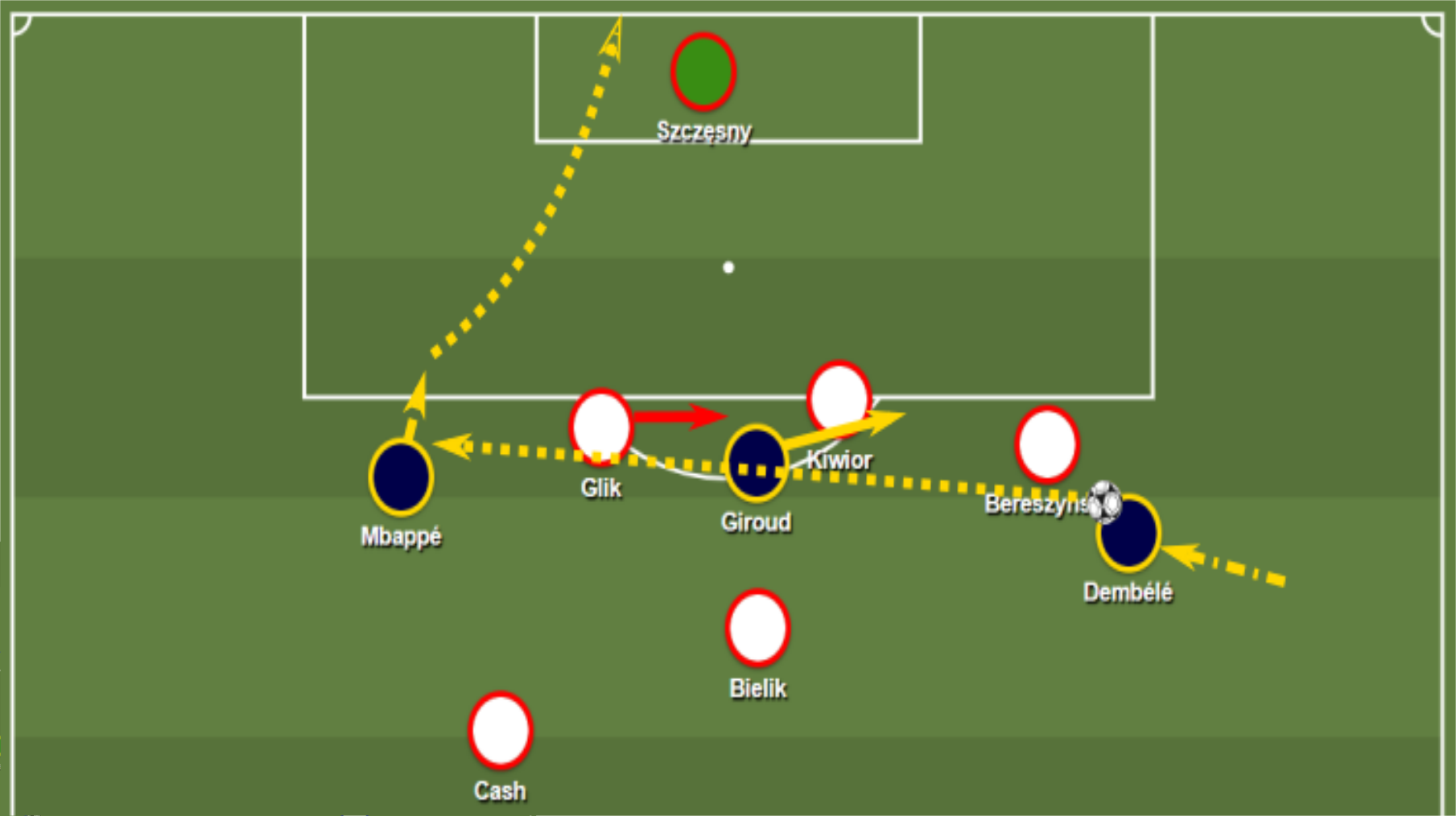