May 5, 2021 Emmanuel Adeyemi-Abere No Comments

Ninety minutes stood between Manchester City and a historic step to the Champions League final. The heat was on, but the hosts rose to the occasion. Barring out Paris Saint-Germain in their resolute 4-4-2 block, they could turn to a proven face once more to be the decisive figure.

Manchester City are on the cusp of making history. Overturning a goal deficit in the first leg in the space of minutes, two away goals have left them in the driving seat in this contest. Now with one last duel between them and their first trip to a Champions League final, the hosts looked to get over the line.

If City could make history in this game, this was a chance for Paris Saint-Germain to rewrite it. As failures to make it past the final hurdle have haunted players and manager, the first leg only escalated this narrative. But stifling City in the first half last week, the Parisians now hoped to supersede that display and return to the stage where they fell in 2020.

City manager Pep Guardiola set up his team in a 4-4-2 shape. Rotating his team from the game on the weekend where his side won at Crystal Palace, he made nine changes to the lineup. Only Fernandinho in the midfield and Ederson between the posts kept their places in the side. Thus, leaving just Rodri out from the eleven that ended the first leg, Pep placed the onus on the in-form players to show up.

Mauricio Pochettino went for a 4-3-3 formation, making three changes to the side from the first leg. Mitchell Bakker came in for Abdou Diallo at left back, while circumstance forced the manager’s hand in the case of the other two tweaks. Idrissa Gueye’s red card left a hole for Ander Herrera in midfield. Upfront, Mauro Icardi then came in for Kylian Mbappé, whose calf complaint kept him on the bench.

The first leg had seen City take control through a higher press, yet the onus was on PSG to seize the initiative. Thus, quantitatively, the home team had far fewer spells on the ball than usual.

In these moments, especially from goal kicks, trends from recent weeks were evident. The fullbacks stayed wide, while Oleksandr Zinchenko had the license to push up the sideline from the left. In the center, Ilkay Gündogan sat next to Fernandinho as the second member of the double pivot. Two central midfielders next to each other. In turn, Phil Foden, Bernardo Silva, and Kevin de Bruyne would come into the gaps between the lines. 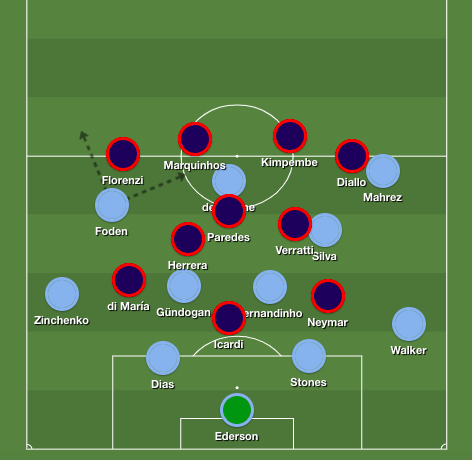 PSG’s pressing scheme against City’s buildup from the back.

Though PSG made early headway on City’s goal, a familiar foe struck the first blow of the game from this setup. High in City’s half, the guests looked to deny their hosts the opportunity to build up from the back. However, picking up his head, Ederson then hit a precise pass down the left flank. There, Oleksandr Zinchenko had roamed far past the halfway line, breaking toward the edge of City’s box.

He then drove to the edge of the box before shifting a cutback into the path of Kevin de Bruyne. The Belgian’s strike deflected away from the goal, but the ball rolled into the path of Riyad Mahrez, whose shot slipped under Keylor Navas and into the net. The winger had scored once more, putting his side two goals to the good on aggregate.

From their initial 4-3-3 shape, PSG had a flexible system on the ball. Leandro Paredes usually stayed deep to dictate the play ahead of the two central defenders. The two fullbacks then pushed higher up the flanks, leaving their teammates to operate in the center of the field. 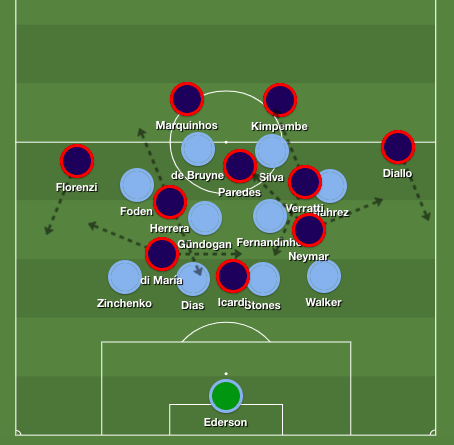 Marco Verratti and Herrera often roamed deeper to support Paredes in the buildup phase. Ahead of them, di María and Neymar also roamed a lot. Neymar’s role saw him drop out from the left halfspace If you divide the field in five vertical lanes, the halfspaces are the lanes that are not on the wing and not in the center. Because there is no touchline like on the wing, players have the freedom to go everywhere. But this zone often is not as well-defended as the very center. This makes it a very valuable offensive zone to play in and a lot of chances are created by passes or dribbles from the halfspace. to collect the ball, looking to thread play between the lines. From the right halfspace, di María tended over more to the left side, where the lion share of PSG’s spells on the ball took place.

City’s front two did not have an easy time coping with the number of players roaming in deeper zones. The double pivot would frequently have to step out of the midfield to cover options on the ball. In turn, the winger would tuck inside to cover the gap in front of the back four.

Several patterns emerged during the first half out of this interaction. If the play had stretched the two in midfield, Icardi would drop off the backline while a teammate made a run on goal. Though the back four covered these runs, the striker’s dropping movements along with PSG’s presence between the lines allowed them to pick up second balls to move into the final third. The one-third of the pitch that is closest to the opposition’s goal.

Incisive vertical passes to split the lines were also on show. Here di María came to the fore again, drifting cleverly into the center of the field before creating quick penetrations behind City’s midfield.

Yet for all their enterprise, PSG’s threat on goal soon faded away. Neither Neymar nor di María could get into positions to pose the dribbling threat that had hurt City in the first leg. The team also sorely missed the runs of Mbappé through the middle to stretch the field, given Icardi’s limited influence on the play. Near their own box, City looked secure, leaving it all to do for PSG going into half-time. 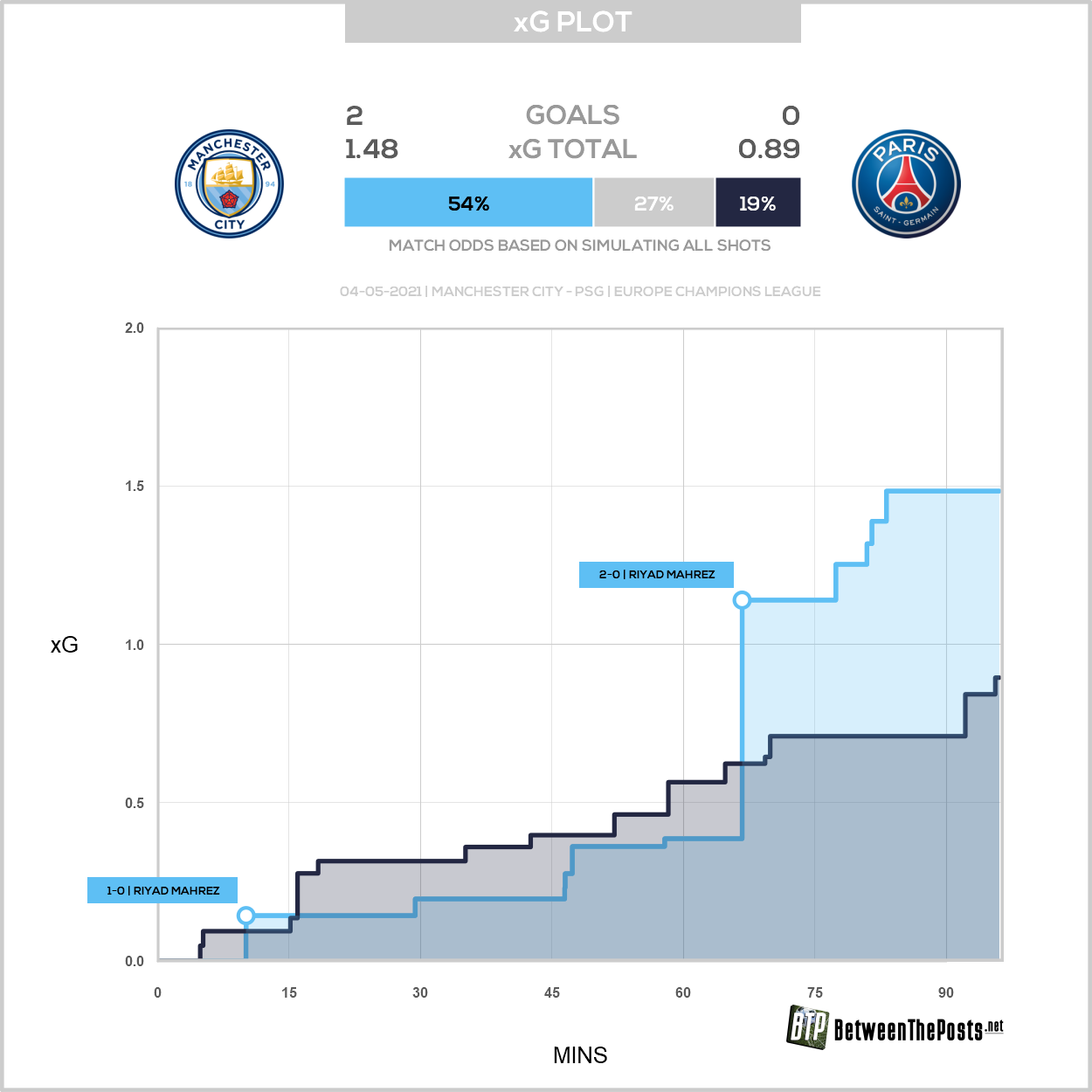 The Parisians were keen to cut the deficit as quickly as possible, but City would not budge. Just as was the case in the second half of the first leg, they stymied PSG’s efforts on the ball, limiting progressions into the space between the lines.

The backline shone in this phase of the game. If PSG broke past the midfield, the back four was often narrow, offering ideal cover for any runs behind. Amid the defenders, Rúben Dias excelled. Not only did he make several last ditch-blocks, but also his robustness in duels held the rearguard together.

PSG kept probing to no avail, leaving City to finish off the job. Neymar teased a free kick into the box, but Fernandinho mopped up the danger. As Alessandro Florenzi prodded the ball back towards goal, Zinchenko then nicked it into the path of Bruyne, who set away Foden to his left on the break.

Free on the flank, the winger burst down the flank, leading the charge on PSG’s goal. He played a one-two combination with de Bruyne before sliding the ball across the six yard box. On the far post, there was Mahrez again, rifling an effort into the back of the net to double City’s lead. 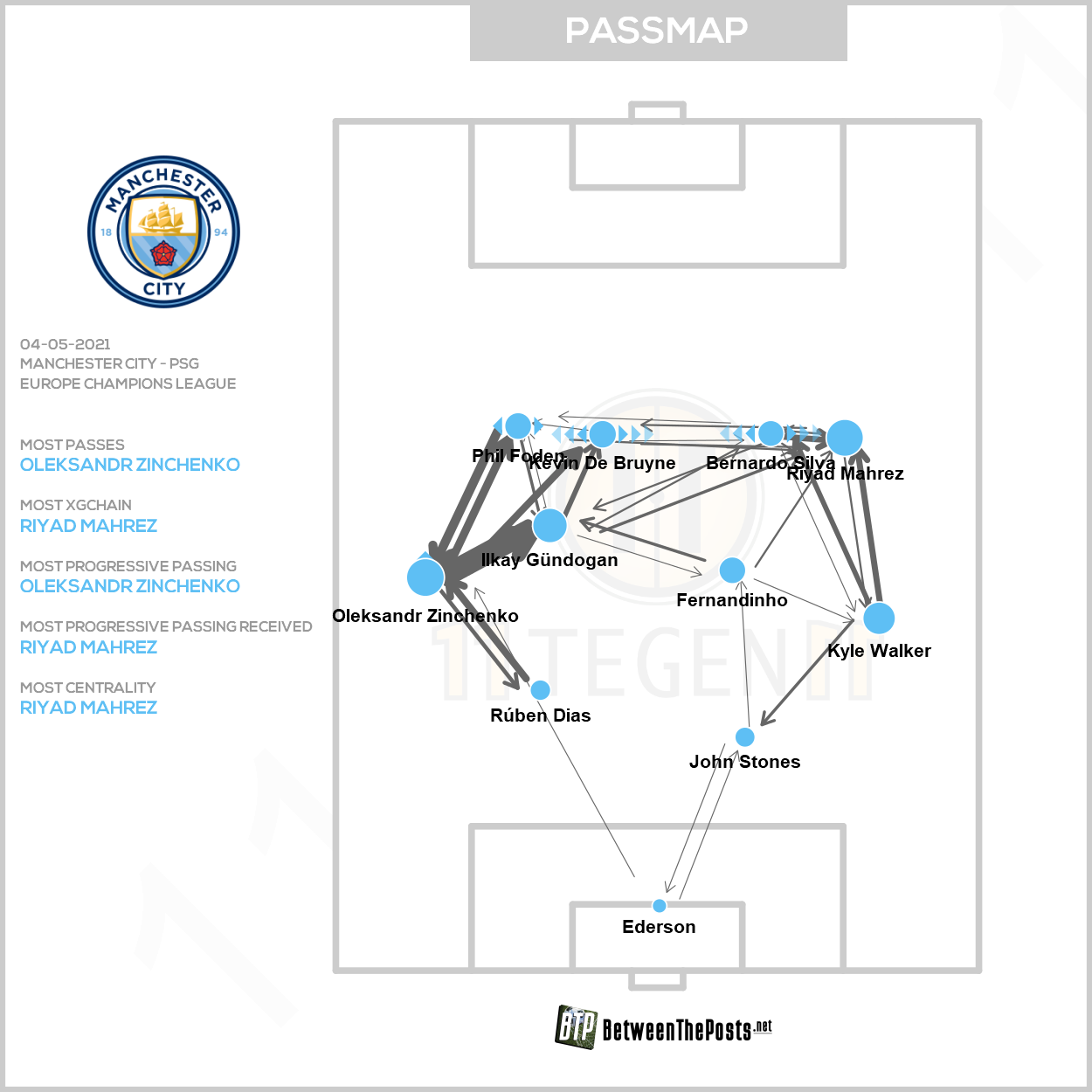 Pochettino had changes in the offing, making two substitutions moments before Mahrez’s second goal of the night. The ineffectual Icardi made way for Moise Kean through the middle while Julian Draxler came in for Herrera. Yet PSG were still bereft of ideas in the final third. And worse was yet to come.

A little over five minutes after the setback, di María found himself out on the left wing. Fernandinho nibbled at the ball to steer the play away from Neymar, giving away a throw in. But as di María went to get the ball, he lost his head. Swinging a flailing arm into the City captain, he then trampled on his foot. With no excuse for his moment of madness, he had to accept a straight red card from the referee.

For the second time in six days, PSG had ended up both a goal and man down in a matter of minutes. Danilo Pereira came on for Paredes, and Florenzi made way for Colin Dagba, while Draxler dropped into a midfield three to help off the ball. Yet while Pochettino rang the changes, it was too little too late. Opting not to bring off Mbappé the bench, it seemed he had accepted that the contest was over. 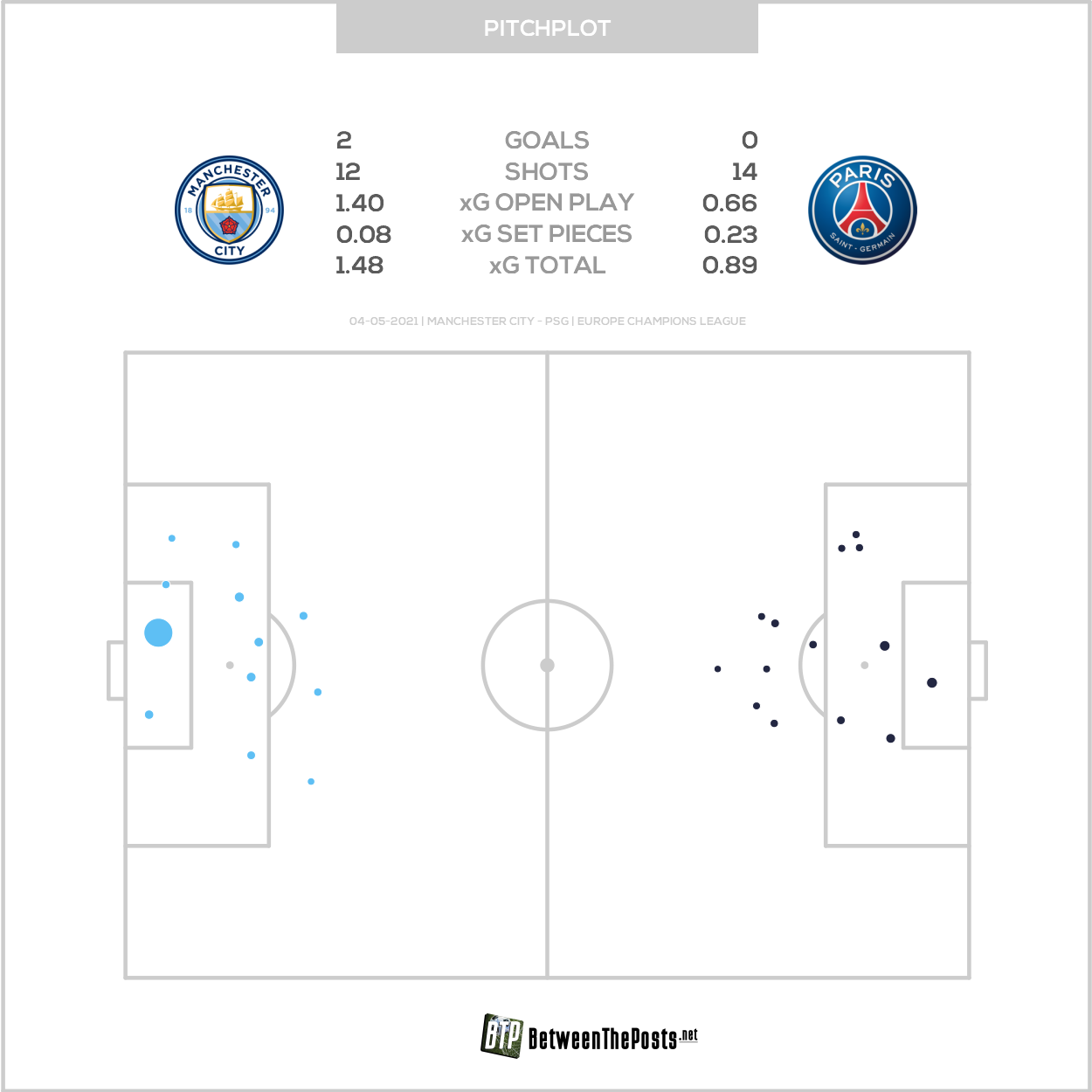 After nearly five years, Pep has guided City to new heights. It was fitting that a side synonymous with their work on the ball proved their worth without it, once again showing how the manager and players have grown in tandem. The side now looks to take the final step, succeed where their guests failed last year, and crown this project with the most valuable jewel of all.

PSG’s quest for Champions League glory goes on. Though City ended up with room to spare, the Parisians’ initial resistance made them work for their place in the final. But in light of di María’s red card, personnel decisions reflected that at least half an eye was on the race for the Ligue 1 title, and that is where Pochettino’s focus will now lie.