In an epoch where the concepts of organization and systems are taking center stage more than ever before, PSG and Manchester City have presented contrasting attitudes to this notion. The Parisians may lay claim to the most feared front three on the planet, but the home team proved that such quality only goes so far before falling foul of equally elite direction from the dugout.

Two outfits bankrolled through oil from the Middle East may find the roots of their success in similar places, but in pursuit of an elusive European crown, their journeys have taken down alternative paths.

Manchester City never cease to evolve under Pep Guardiola. Organized pressing, flying fullbacks, and false nines are core facets of a side that have begun to gather pace. In Europe, that form has translated over to a 15 goal haul that only Bayern Munich better across the rest of the group stage contestants. The one blot on their record? A team, in its loosest sense, that is their only obstacle to the top spot.

If City are a well oiled machine, PSG have often looked like little more than an assortment of spare parts. Their stellar talent has not found a home in a unified collective, preferring to shine on its own. The result? Perpetual murmurs of discontent among the camp, rumors of Mauricio Pochettino leaving in favor of a vacancy at Manchester United, and a comfortable twelve point gap at the top of Ligue 1. So would the collective of stars or the star collective lay their claim to first place in the table?

Guardiola picked his usual 4-3-3 formation. Coming off the back of a comprehensive 3-0 victory over Everton, selection constraints threatened to sully the mood. Jack Grealish and Phil Foden were fitness doubts, while self-isolation ruled out Kevin de Bruyne. So, Riyad Mahrez played on the right wing, and Oleksandr Zinchenko came back into the fold to make a rare appearance in the middle of the park.

Pochettino fielded his men in a 4-3-3 shape. The main setback for the manager was Marco Verratti’s absence with a thigh injury. This blow forced Ander Herrera to step into the midfield. The three other alterations to the team from the 3-1 win over Nantes last time out were in the back four, where Nuno Mendes, Presnel Kimpembe, and Marquinhos looked to keep another shutout against the Citizens.

European nights against the best of the best have prompted Pep to make strategic adjustments. In this case, though qualification from the group was almost a certainty, the opponent presented a unique threat. In Neymar, Lionel Messi, and Kylian Mbappé, the Parisians have one of the fiercest tridents on the break around. So the manager was very attentive to the means through which his men attacked.

Pochettino’s men have had a habit of deceiving spectators that they have committed to truly defending as a team. They seemed to initially sit in a 4-3-2-1 shape where Mbappé was at the head of the block. Their close proximity to each other and to Rodri forced City down the line in the early stages. But as tends to be the case, the work rate from the front three got laxer. So, City hardly circulated the play via the center-backs, building up mainly through the fullbacks with Rodri as a switching point.

This role depicted how City looked to finalize attacks. Going around and over the block more often than through it, Pep’s men routinely used Riyad Mahrez, finding him with switches of play to isolate Mendes. This offensive focus aligned with the manager’s tendency to strive for stability in Europe, featuring less dynamic roles for the fullbacks. But it did not mean they were any less dominant. 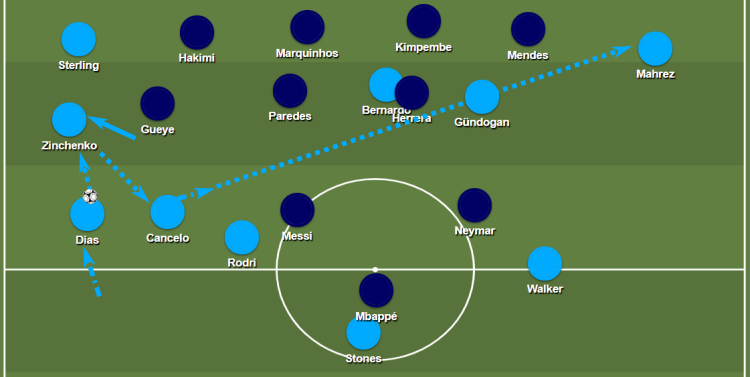 28th minute: offensive sequence from Manchester City preparing the switch of play. Once Dias drives forward with the ball, it is a trigger for Cancelo to move inward. Zinchenko moves on the outside shoulder of Gueye, creating triple width, and Sterling moves even higher to pin Achraf Hakimi. The combination of well coordinated movement and safe ball circulation generates room in front of the midfield for the right back, who can swing the play out to Mahrez.

Once Mahrez received the ball, City intended to support the right winger with runs into the channels. Ilkay Gündogan mixed progressive dribbling from deeper positions with this role. Bernardo Silva also roamed from the central role that Pep assigned him into these rooms, restoring an old connection on the right flank. And that was telling, as their ability to separate from markers tormented PSG all night. Man-oriented tracking from Leandro Paredes and impressive blocks inside the box from the center-backs may have kept the goal output down, but the Parisians were on the back foot.

In phases when they did not have the ball, City maintained their high level of organization. A high press may have seemed risky in light of the matchups at the back, but the further away PSG’s front three were from goal, the less of a direct threat they posed. Even if the away team breached this setup, they still often faced a compact 4-4-2 block. Here, Zinchenko would move to join Bernardo upfront.

Short distances between the two lines of four, front foot movement from Rúben Dias, and an intense retreat in the case of line-breaking passes denied virtually any shots on goal. So the story at half time was a familiar one: total dominance from City bar on the scoresheet.

And it would cost them once again. In the 50th minute, a buildup sequence saw Mendes thread the pass into Messi, who linked up with Neymar to send the left back down the line. The Brazilian’s runs weaved the play together, attracting the attention of Cancelo to leave Mbappé free on the far post. One on one with Ederson, he slotted a strike through the sprawling legs of the goalkeeper into the net.

Not long after that opening goal, Pep reacted to the deficit with his first substitution of the contest. Zinchenko made way for Gabriel Jesus, who operated in the role of the striker. Bernardo then dropped into the midfield, and City soon delivered their riposte. Cancelo fed the ball back to Rodri, who lifted the ball over the back four into the path of Walker. The right back hooked a cutback across the face of the six yard box, where Jesus attacked the goal only to miss his effort. But Sterling, true to form, had arrived at the back post, poking the ball beyond the reach of Keylor Navas. What would happen next?

63rd minute: buildup to Sterling’s goal. City create a far post 3-on-2 overload with typical Pep features. Counterdynamics are generated through Walker diagonally attacking the goal while Gündogan drops backward, teeing up Sterling to attack the cutback aimed at the second post.

Pochettino’s next trick featured a 4-2-3-1 shape off the back of Ángel di María’s entry into the action. This extra Latin flair threatened to tip the scales in favor of the visitors. Messi, di María and Mbappé stitched together neat one-two combinations, allowing Neymar to swivel through bodies and break into the box. Only Ederson stood between him and the goal, but he bundled a shot wide of the net.

And where Neymar failed to deliver, Pep’s men did not. Moments later, a well-trained pattern of movement came to life with a striking resemblance to their equalizer. Mahrez picked up the ball from Rodri on the right flank, slipping a pass into the path of Gündogan. Once the play worked its way back to the winger, the hosts had generated an overload on the back post. Sterling drew cover from Marquinhos, Bernardo deftly laid back the ball away from Hakimi, and Jesus guided a strike home. With the lead to hold onto, the home team then wound down the clock to bag a precious three points.

Man City have turned it around to take the lead against PSG!

“In football, the results are random. Nobody knows what will happen. What gives you consistency is how you perform.” Pep’s words after the final whistle ring true across a pair of games that highlighted the acute margins between success and failure. For most of the 180 minutes of action with PSG, they not only kept their star men at bay but also tilted the field in their favor to impose their will. In the long run, City got what they deserved from the group stage, topping the table with a game to spare.

Doubts will continue to hang over PSG. Facing one of the elite sides in Europe, they ended up second best in most aspects of the contest. Whether or not Pochettino is around long enough in the French capital to see out this season, their fate in Europe rests on finding organization that still eludes them. 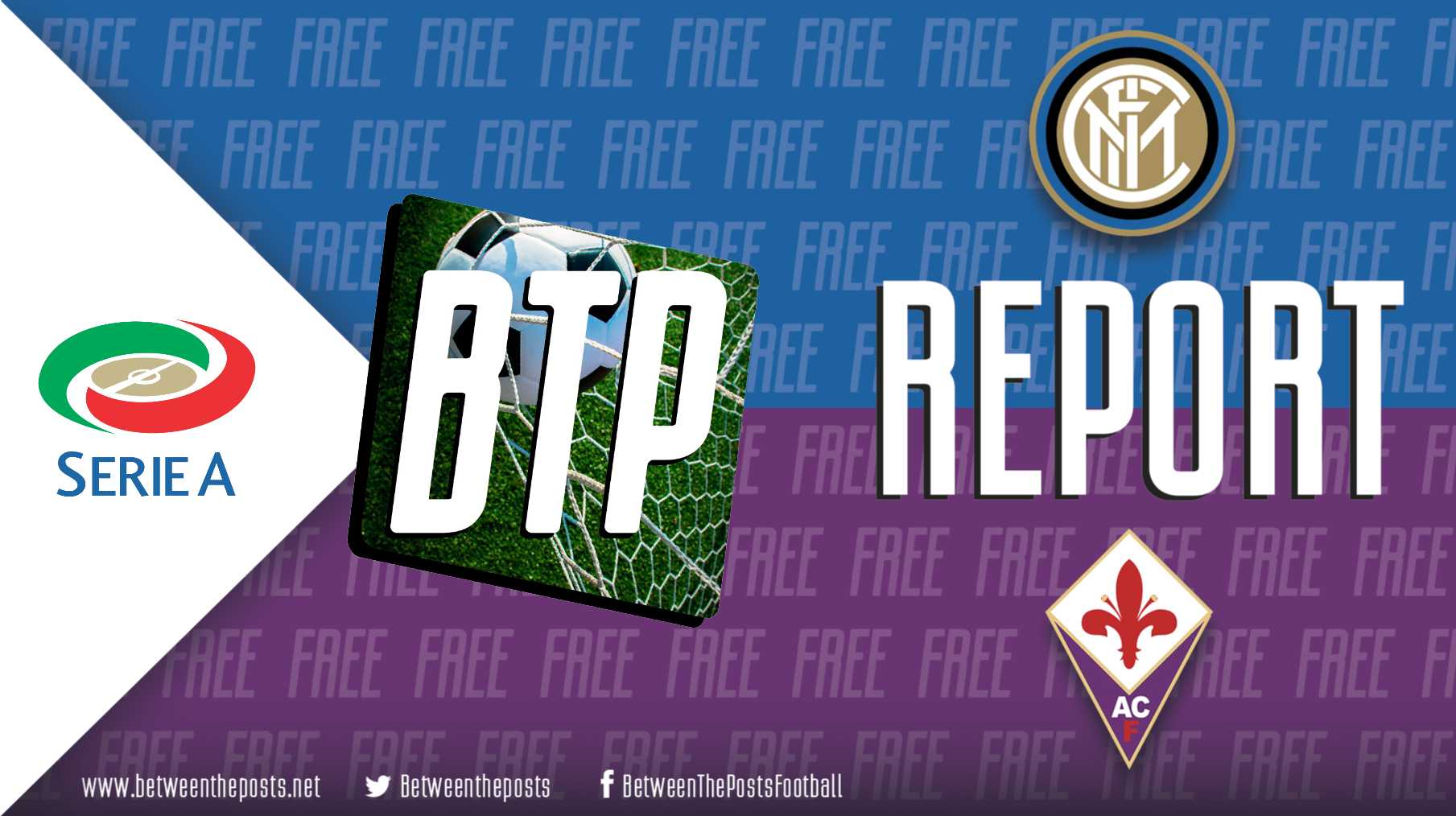