After a first half that saw both teams have some structural issues in possession, it was Napoli that eventually figured it out and scored a deserved late winner.

Fiorentina started this game with a perfect record, winning both of their first two matches, the 6-1 battering of Chievo Verona standing out in particular. They did not play in Serie A’s opening weekend due to the collapsing of the Ponte Verdi.

Napoli opened the season with six points from three games. Their only defeat came away to Sampdoria (3-0), where they conceded three goals from three shots on target. Napoli’s coach Carlo Ancelotti had changed his formation to 4-4-2 a couple of times in-game this season. Against Fiorentina, he started with it.

4-4-2 was the standard formation in football for a couple of decades. It can remind you of a time filled with iconic striker-duo’s, wingers that played on the touch-line and full-backs that whipped in one cross every three matches. This old school formation is not seen that often anymore, because nowadays teams like to play with more than three lines in possession and try to occupy the valuable space just behind the striker. But when utilized with two wingers who come inside and act as attacking midfielders, it still has a place in the modern game.

This is also how Napoli went about their business. The striking partnership of Dries Mertens and Lorenzo Insigne was supported in possession by Piotr Zieliński and José Callejón, while Allan and Marek Hamšík played as the controlling midfielders. Fiorentina formed a 4-1-4-1 against it in defense. 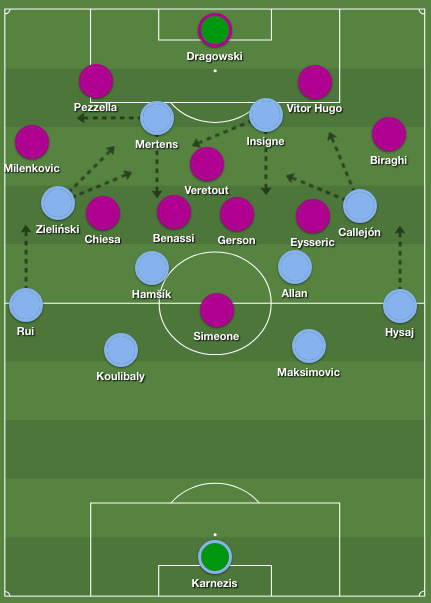 Napoli’s base formation in possession. The wingers had a lot of freedom to come inside or support the strikers up front.

Like a lot of European clubs, Fiorentina try to build op with three central defenders and two central midfielders. To achieve this, right-back Nikola Milenković came inside and acted as a central defender. On the left, full-back Cristiano Biraghi was hugging the touch-line, while winger Federico Chiesa was doing this on the other side. Marco Benassi played as a hybrid between central and attacking midfield, with a lot of positional freedom. He could sometimes be seen coming close to Chiesa for a combination, or play higher to form a square in midfield when Valentin Eysseric came inside. Napoli formed a defensive 4-4-2 against this formation of Fiorentina. 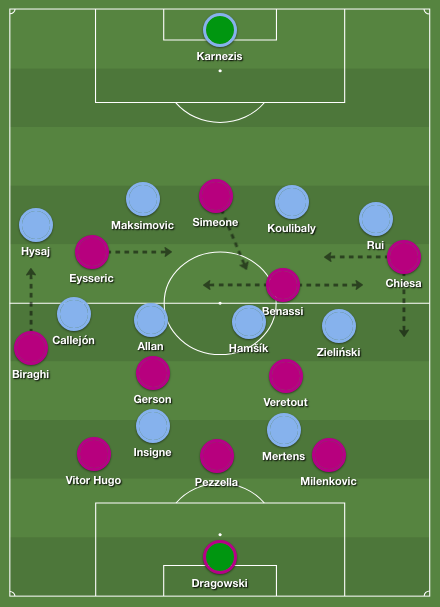 Fiorentina’s positioning in the build-up was very asymetric

Both teams falter in possession, but Fiorentina struggle most
Fiorentina did not create a lot of chances in the first half, as their ingenious plan did not came together. As seen in the image above, their double pivot in midfield was trapped between Napoli’s strikers and central midfielders. This often led to the three central defenders passing only to each other.

If Gerson and Jordan Veretout did manage to get on the ball, they offered little in terms of feeding the offensive players, further up the pitch. Because Hamšík and sometimes Allan were pressing them quite high up the field, there was certainly space to play in for Benassi and Eysseric. Neither of them could be seen exploiting the space between Napoli’s midfield and defense on a consistent basis.

The ploy with Benassi was probably thought up to get Chiesa in isolated situations with Napoli’s left-back Mario Rui. This never materialised, and as the first half progressed, Chiesa started to drop deeper and deeper along the touch-line to get involved. In the final ten minutes of the first half, he switched with Eysseric. Instead of opting for a more direct pass to lone striker Giovanni Simeone, Fiorentina insisted on playing out from the back in a way that did not function for the entire half.

Unfair to compare Napoli with themselves
Maybe it is unfair to compare this Napoli team with that of last season. The positional play is less fluid, the tempo in the build-up is slower and there is less interchange of positions.

The contrast is most stark when the goalkeeper is pressed. Last season, Napoli tried to play out from the back and found the spare man more often than not. The long ball was only used as a last resort. Now, the goalkeeper is instructed to search for the diagonal ball to Callejón or Zieliński immediately when the opponent presses.

Taking this all into account and focussing on this match, it is safe to say Napoli did slightly better than Fiorentina. The aforementioned Hamšík is deployed in a deeper role by Ancelotti this season. He did a fine job with Allan in progressing the ball on the opponents’ half.

Although the the attacks are not as fluid as they have been in past seasons, Napoli’s offensive prowess is still impressive. If you can field Mertens, Insigne and Callejón, you will create chances.

Even though Insigne is somewhat limited in this formation – he can not play from the inside-left as much as you would like him to – he is still one of Serie A’s most creative players. He had five shots in the first half. One of Napoli’s biggest chances came from a trademark Callejón run behind the opponent’s defense. 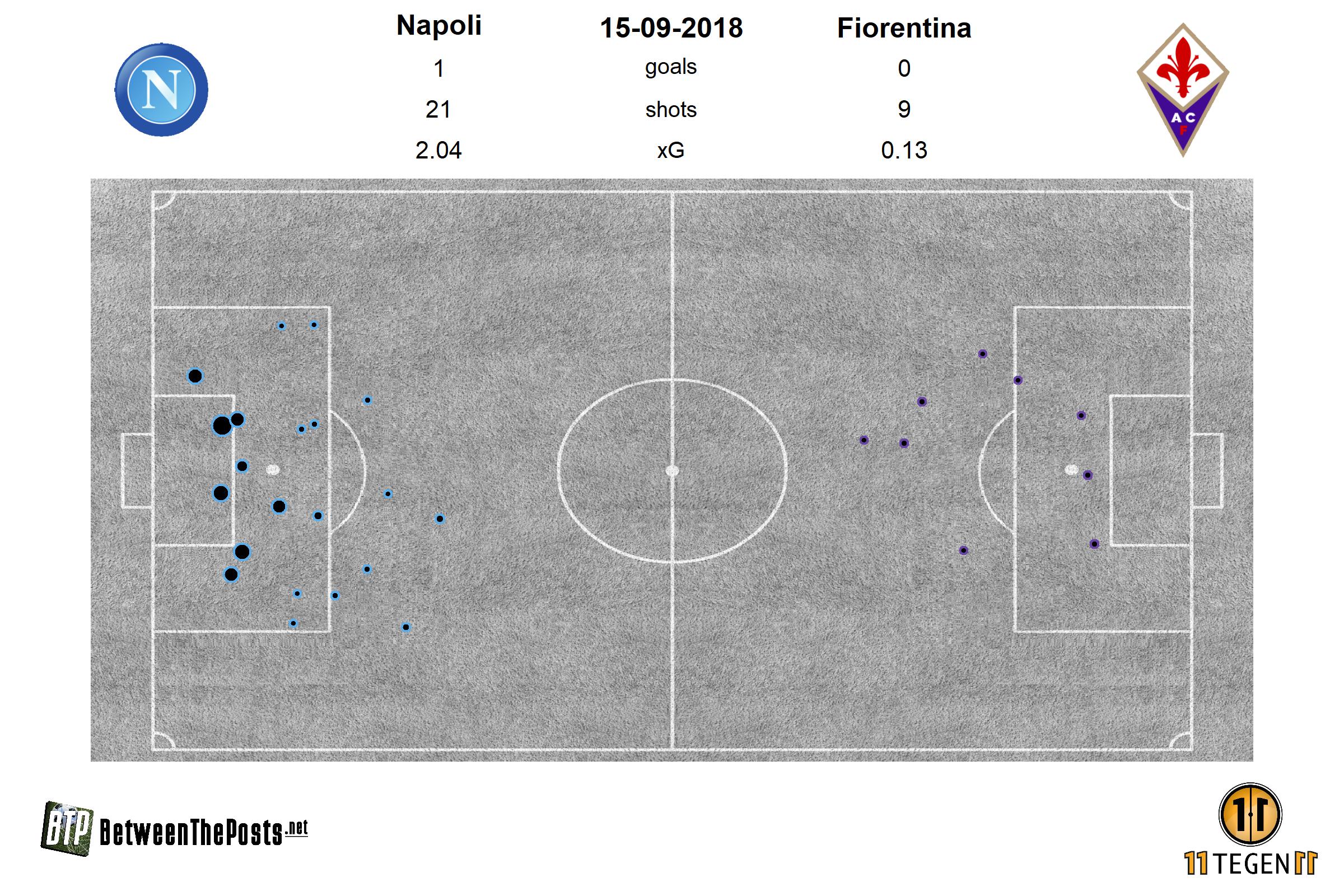 Second half: Insigne plays deeper, more freedom for Zieliński
In terms of chances, it was not a memorable half of football. Combined, both teams came to fifteen shots, but only three of them were on target. The combined Expected Goals created by both teams came in at a grand total of 0.66. Unsurprisingly, the score was 0-0 at half-time.

Fiorentina’s manager Stefano Pioli did not change anything about his team’s positioning at half time, and Napoli came out of the dressing room unchanged as well. This made the opening fifteen minutes of the second half look a lot like the first half of the game: Napoli playing on Fiorentina’s half most of the time, without creating a lot of high quality chances.

Just before the hour mark, Ancelotti introduced Arkadiusz Milik for Mertens. Milik is more of a pure centre forward than Mertens. In the final thirty minutes of play, Insigne could be seen playing more around Milik than as a striker himself, making Napoli play in a 4-4-1-1 at times. This structure was also maintained when Callejón was taken off for winger Adam Ounas.

One of the problems for Napoli in this match was that they did not get a lot from their full-backs. When Zieliński came inside more and more, this became extra apparent as left-back Mario Rui had more space to play in. The Portuguese defender only incidentally offered his team anything substantial with his passing and crossing. On the other flank, Elseid Hysaj simply did not had a lot of room for overlaps because his partner on the right hand side stayed wide most of the times.

As the second half progressed, Fiorentina gave up on pressing altogether. They often defended with nine outfield players behind the ball in a deep 4-1-4-1 or a 4-5-1, with Giovanni Simeone as the lone striker. Even though Pioli’s team was mostly dysfunctional in attack, it is fair to say that they did an okay job on limiting the opponents to big chances by getting the basics right from a defensive point of view.

In the 78th minute, Napoli got what they deserved: the opening goal. It was telling that it came from a mistake in Fiorentina’s build-up. After they lost the ball, a quick vertical pass to Milik was played, who found Insigne with a clever chipped ball. With his ninth (!) shot of the match, he finally found the back of the net.

As a reaction to conceding the opening goal, Fiorentina brought on Marko Pjaca for Benassi and attacked in a more traditional 4-2-3-1. They could not create a single shot in the last ten minutes of the game.

Takeaways
After three matches, it is a bit early for bold predictions, but the first signs indicate that Fiorentina will probably be a fine defensive team this season. For Pioli, the big challenge will be how he creates a side that is defensively solid on one end, and still gets the best out of his creative players Chiesa and Eysseric at the other end.

The style-change from Sarri to Ancelotti is in full flow at Napoli. They have started the season well, winning against Lazio Roma, AC Milan and Fiorentina, and having the best chances in the only game they lost. It is interesting to see if Ancelotti can instill a modern 4-4-2 that yields a fluent offense, or eventually reverts back to the 4-3-3 formation that took Napoli to great heights in the last seasons. 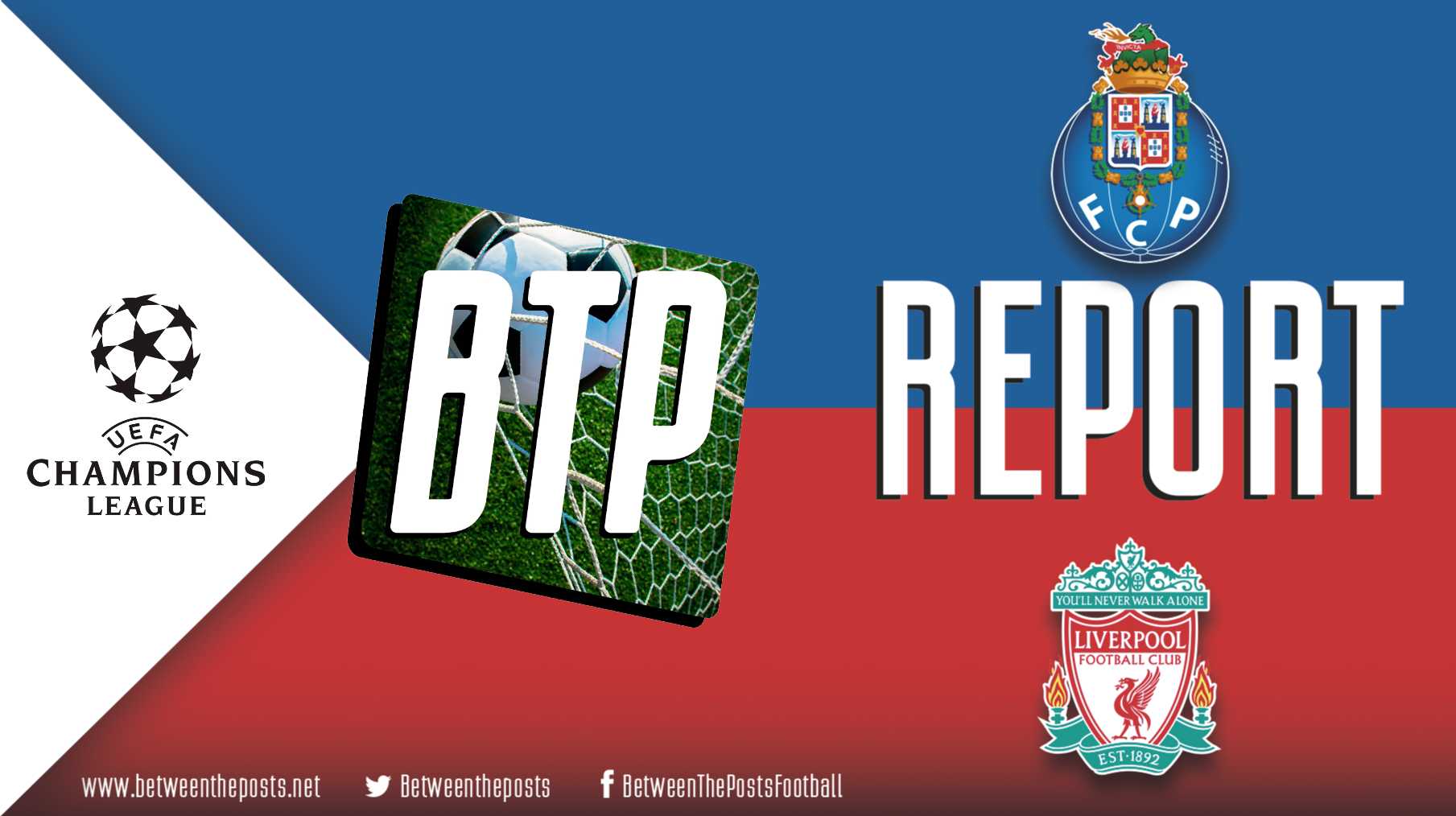