Napoli – Juventus: Napoli’s Organization Too Much For Juve In Small Identity Crisis (2-1)

Napoli’s diligence finally gifted Gattuso his second Serie A win against the most esteemed of opponents. Juve’s second half performance had nothing to do with Sarriball, and while Juve experienced a small identity crisis, Napoli swiftly took the lead to run away with a deserved victory.

When Maurizio Sarri returned to Naples for the first time since his departure, the difference in the atmosphere surrounding this game could already be felt. Whereas an unstoppable buzz used to accompany the wait until the opening whistle, the discrepancies between Sarri’s Napoli (or Juventus) and Gattuso’s side were too vast for the same uproar to rise above and into the atmosphere of the city of Naples.

Boosted by Cristiano Ronaldo’s goalscoring form, the new year has seen a bright light uplift Juventus, after 2019 ended with a defeat to Lazio in the Supercoppa, carrying the league leaders on a five-win streak they hoped to continue against Napoli.

Their latest outing against Roma, especially, offered a clear picture of the improvements Sarri’s men have been undergoing, when a 3-1 victory helped restore harmony after the first encounter against Paulo Fonseca’s team had showed a bleak overview of Juve’s progress.

And so, Juventus were forwarded into Sunday’s second big match with the chance to stretch their lead over Inter by six points, following Conte’s side’s draw to Cagliari. After the mid-week 4-3-3 formation, Sarri returned to his 4-4-2 diamond shape, with Paulo Dybala behind Cristiano Ronaldo and Gonzalo Higuaín.

Napoli, on the other hand, spent the week in a training camp, in an attempt to put together the pieces of the puzzle that have so long been detached. Stuck in thirteenth place, this match offered both a huge challenge as a chance to restore some of their dignity.To achieve this, Diego Demme was fielded at the base of a midfield trio with Fabián Ruiz and Piotr Zieliński while Elseid Hysaj, Kostas Manolas, Giovanni Di Lorenzo and Mario Rui started in defense. In attack, Lorenzo Insigne and Josè Callejón supported Arek Milik.

Napoli played with a rather flat backline with only Demme nearby, while the two interiors positioned themselves between the lines, and the wingers started wide. Juventus responded by pressing the two fullbacks with midfielders Rodrigo Bentancur and Blaise Matuidi, while Dybala marked the pivot and the strikers stepped onto the center-backs as they received. Once Juve were pushed back into their half, though, they maintained a more composed approach, with the attacking midfielder staying slightly deeper to cover the midfield.

Without the ball, Napoli would retreat into a 4-5-1 low block with very narrow lines, intending to prevent Juventus from developing their combination play in central areas, thus diverting the ball wide. Moreover, when the ball was circulated between the center-backs, either the winger or the midfielder on the side of the ball would leave their line to press.

However, although this was intended to disturb Juve’s deep circulation since Juve’s midfielders stayed ahead of Napoli’s midfield line, the interiors could pull Napoli’s midfielders out by moving towards the ball. In doing so, spaces behind the presser would open up for players to receive. This was particularly evident when Pjanić would access Dybala between the lines after Bentancur had stayed deep. 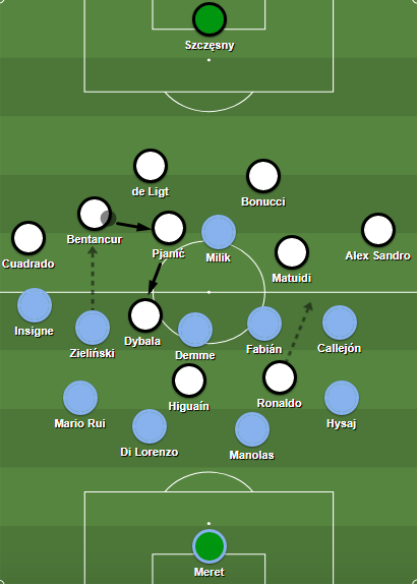 Napoli’s interior is pulled out by Bentancur’s deep position.

Albeit being eventually able to create situations to move the ball in tight spaces, Juve initially struggled at using the entire field as the fullbacks neither provided width nor depth consistently. With the center midfielders not providing depth either, the possession was halted by Napoli’s compactness and the limited spaces available.

So, when Napoli inevitably regained possession, they tried to attack the space behind Cuadrado; very aggressive in stepping out, the space behind him became a target to Zielinski’s attacks when Insigne moved towards the ball.

Besides these movements that Napoli engaged in against Fiorentina as well, Callejón’s runs remained the usual target for Insigne’s diagonal passes. These passes or switches consisted of the main final pass solution to an otherwise sterile attack that threatened Juve the most when being able to attack in open spaces following a successful buildup.

According to Gattuso’s ideas, the buildup stage is supposed to create the conditions for attacking on the flanks, something Napoli accurately demonstrated by stretching Juve’s lines and subsequently finding the necessary spaces to exploit in wide areas. The strong support around the ball with the winger and interior dropping on the near side troubled Juve’s first line, which did not possess the necessary intensity to put the ball-carriers under pressure. In addition, Pjanić was not always on time to follow the midfielder, creating a free man situation behind the first line of pressure. 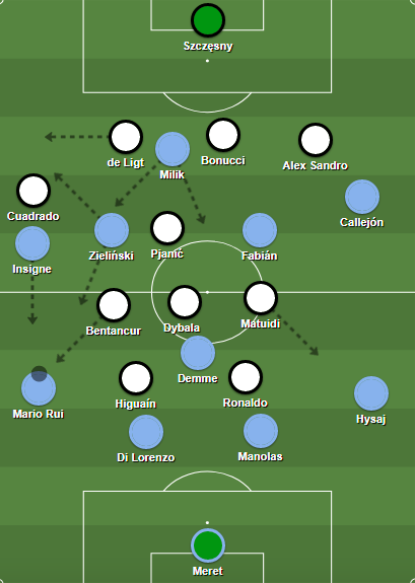 Conversely to Napoli’s buildup, Juventus often ended up in suboptimal areas on the left with the ball, where Juve’s excessive directness and Matuidi’s technical issues combined to lead the progression astray. Therefore, it was no surprise to see Sarri’s team produce zero shots in the first half.

Neither manager made changes to their respective teams at the break, the first change was made after 50 minutes, when Sarri was forced to take off Pjanić due to injury. In came Adrien Rabiot, who slotted at right midfield and pushed Bentancur into the holding midfielder position.

If the substitution did do anything to improve the contest, though, it was without the ball. Bentancur’s aggressiveness proved key in preventing Napoli’s interiors from finding the same freedom they had been enjoying behind Juve’s first line in the first half. 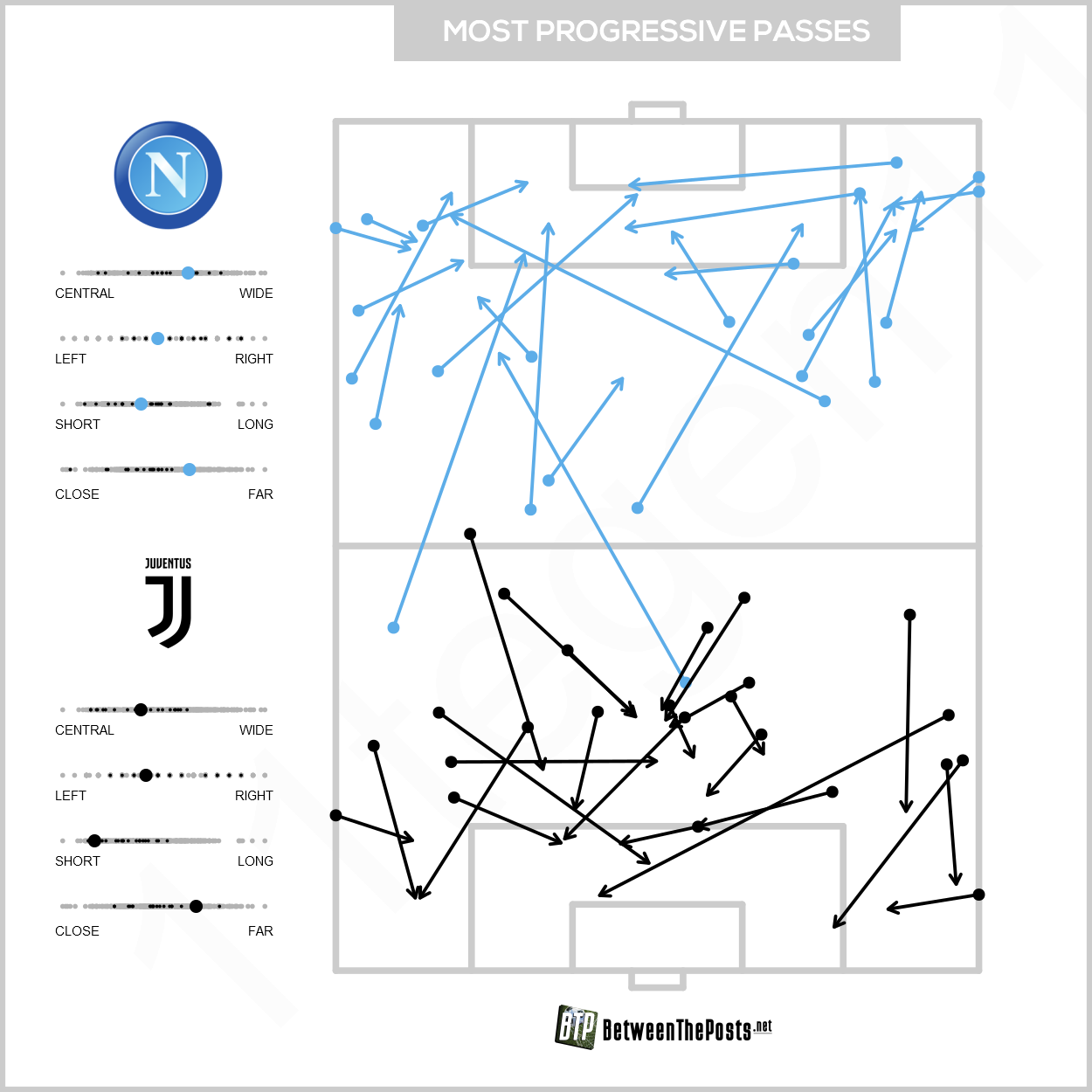 However, Sarri’s side still was not able to occupy the space between the lines, nor threaten Napoli’s depth sufficiently. Eventually, the inability to efficiently control possession and block Napoli’s progression allowed Zielinski to tap in Insigne’s rebounded shot in the 62nd minute for the lead. Ironically, the same Bentancur who had increased Juve’s midfield aggressiveness was at fault for not pressing or at least actively interfering with Insigne at the time of the shot.

Interestingly enough, in the 68th minute, the first to make a change was Gattuso. Lobotka came in for Demme, positioning himself at holding midfield. Four minutes later, Douglas Costa and Federico Bernardeschi replaced Blaise Matuidi and Paulo Dybala.

Juve now lined up in a 4-3-3 shape on the ball with Douglas Costa on the right wing and Bernardeschi just behind as the right interior, shifting Rabiot to the left slot of midfield. Out of possession, instead, they fell back into a 4-4-2 medium block with Rabiot and Costa out wide.

Juve’s sterile possession persisted, though, as well as basic technical mistakes that showcased somewhat of a detachment from the state of the game, perhaps still caused by the shock of conceding. Either way, the visitors’ play became very focused on Douglas Costa, who at first monopolized possessions without receiving support to truly make an impact, and then faded away as the game wore out.

If the play stayed on the left, Alex Sandro would just whip crosses in the middle, completely ignoring any possible option inside. If the first half had seen Juve fail to open the spaces they needed to develop their possession, the second saw a complete lack of interest in doing so, which culminated in the exposure of spaces on the counter and an inability to counterpress as a consequence.

Insigne’s second goal for Napoli was the deserved game ending to a match that really never saw Napoli threatened, at least until Ronaldo found a very  late goal to make the scoreline look less severe. 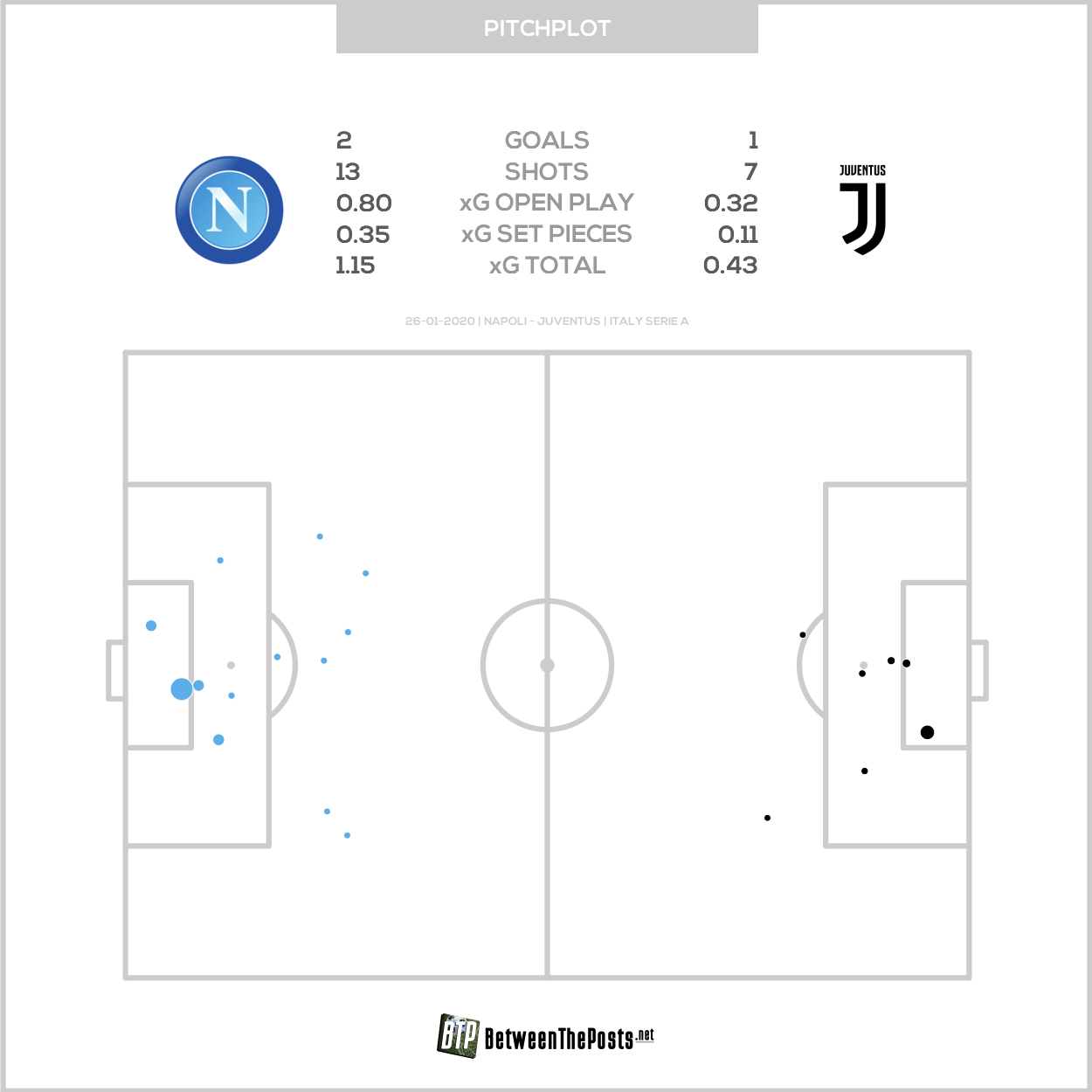 Sarri’s first return to Naples did not go according to plans. His personnel selection did not suit the requirements of such a game, especially in attack, where the front three failed to keep track of the buildup. Furthermore, even though Matuidi’s defensive work is invaluable, he once again exposed the numerous technical issues that slow down and harm Juve’s possession spells, in a compromise Sarri’s men cannot afford nor sustain.

Meanwhile, Gattuso’s men showcased a diligent display during which they defended efficiently and attacked equally well in the vast spaces Juve conceded, finding their first win against Juventus since Koulibaly’s famous header, ready to step back onto winning ways through a deserved boost of confidence in their manager’s tactical project.