Ecuador outwitted the Dutch with perfect tactical adjustments, and completely overpowered them on the pitch. An early Dutch goal papered over the cracks, but from that moment on, Ecuador’s mix of astute tactics and impressive individual performances completely nullified their opponent. In the end Ecuador was left with hearts, minds and a single point. And Louis van Gaal has work to do.

Both teams went into this second round of World Cup group games on the back of a 2-0 win. Ecuador easily dismissed a highly disappointing Qatar side in the opening fixture, while The Netherlands left it very late to earn a win over Senegal. With those results in the bag, both teams are in pole position to qualify from group A, but the Dutch seemingly had better chances of clinching the first spot, with the prospect of potentially boosting their goal difference tally when needed against Qatar in the final round.

It wasn’t a surprise that Van Gaal made adjustments to his starting lineup, with Jurriën Timber returning after being dropped against the aerially strong Senegal team. However, there appeared to be more changes. Van Gaal continued with Noppert in goal, for the second international match of his career, behind a defense of Blind at left wingback, Aké, Van Dijk, Timber and at right wingback Dumfries. In midfield played Frenkie de Jong, with Teun Koopmeiners – elected for better counterplay against Ecuador star Moisés Caicedo – and Davy Klaassen, which meant no starts for either Steven Berghuis and the disappointing Vincent Janssen. Cody Gakpo moved to a striker role next to Steven Bergwijn.

Ecuador’s main surprise had already leaked through the day before, with their switch to a back three, which hadn’t been seen before under manager Gustavo Alfaro. Hernán Galíndez played in goal, behind Estupiñán at left wingback, Piero Hincapié, Félix Torres, Jackson Porozo and Angelo Preciado. The strong midfield pivot consisted of Jhegson Mendez and Moisés Caidedo, while the front three saw main man Enner Valencia and Gonzalo Plata roam relatively free behind striker Michael Estrada in possession, and play a crucial role out of possession.

Both teams set up in a comparable formation, in theory – something Van Gaal alluded to in his pre-game interview. “They’re likely to play in the same formation as we do. So I think we’re going to win. I like that, because we’re playing better than they do.”

Pre-match words that could hardly have turned out more painful in hindsight. With both teams setting up roughly in a 5-2-3 formation, similarities in terms of game plan and execution ended there.

As early as in the second minute, signs of things to come were apparent. The Dutch three central defenders circulated possession amongst each other, while Ecuador’s offensive three neatly defended the center of the pitch, making it impossible to reach Frenkie de Jong. Gonzalo Plata did a perfect job man-marking Frenkie de Jong, while Valencia and Estrada closed off all forward targets. Wingbacks Preciado and Estupiñán were ready to pounce on Blind or Dumfries in case The Netherlands would attempt to play around the central block.

Left with few options, captain Van Dijk played an aimless long ball towards anti-target man Bergwijn. Possession squandered. The next possession saw a Dutch turnover from a poorly executed sideways pass, missing the only open target in buildup play, a deliberately unpressured Timber, with Valencia ready to close him in at the sideline. 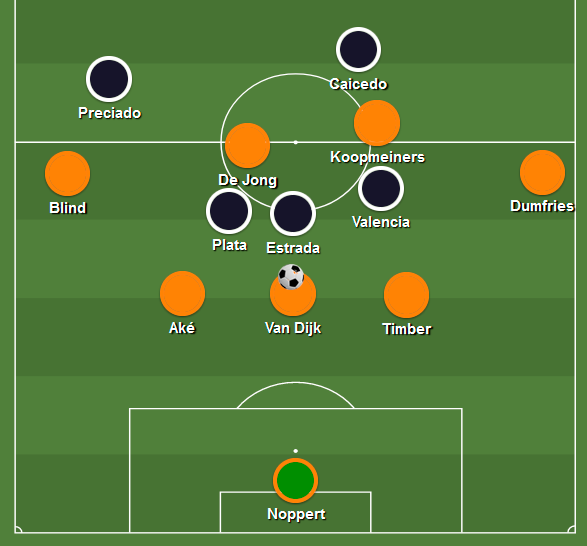 2nd minute. Van Dijk left with few other options than to go over-the-top against a compact central block. Note Preciado is well-positioned to pressure playmaker wingback Blind should he be picked out in buildup play.

By contrast, Ecuador elected to drop defensive midfielder Jhegson Mendez in the back line in possession, and with the wingbacks up high this created a situational back four. Up against Bergwijn, Klaassen and Gakpo, the Ecuador buildup was full of vertical passing options in a good-looking four-versus-three situation. Compare this to the painful strangle the Dutch experienced in their three-plus-one setup that was completely suffocated by the Valencia-Estrada-Plata triangle.

As football goes, goals don’t always relate to tactical patterns. After another long ball Dutch attack, a rare own half turnover came to cost Ecuador big time, as Cody Gakpo unleashed a characteristic fireball from just outside the box. It blazed past a hapless Galíndez and all of a sudden things looked bright and Orange.

It took Ecuador some twenty minutes to shake off the disappointing early goal, but by that moment, they finally managed to add the missing piece to the buildup puzzle. With the pressure level turned up a notch, they established a slight territorial advantage, and were able to exert the vertical passing advantage not from their own defensive third, but from just behind the midfield line. A series of well constructed offensive plays followed, and they finished the first half with a six to one shot advantage.

Limiting the Dutch buildup in such a significant way, Ecuador fully exposed the holes in Van Gaal’s squad. All of the buildup runs through Frenkie de Jong’s hero-ball and Daley Blind’s pinpoint progressive passes. While both players are definitely capable of exerting significant influence that way, making them do this from their own third of the pitch completely nullified their contributions. Koopmeiners failed to escape Caidedo’s pressure and was an irrelevant factor, while Davy Klaassen is a ghost player by himself, until the ball reaches the final third, The one-third of the pitch that is closest to the opposition’s goal. which it didn’t.

With Dutch minds eagerly awaiting at least an attempt to correct the tactical imbalance imposed by Ecuador’s astute tactics and dedicated execution, it took no less than eighteen seconds for the Dutch buildup to be forced into the first hopeless long ball, in a carbon copy situation from the second minute situations from the first half, described in detail above.

The only half-time change was Memphis for Bergwijn, while it was clear that more than a better-player-for-other-player switch was desperately needed. In the end, Memphis turned out to experience one of his most disappointing nights in an Orange shirt, with little service and support and lots of uncharacteristic mis-controls.

It took all of four minutes for Ecuador to finally reap the rewards they had been earning the entire game. Who else but Enner Valencia followed-up a long range attempt from left wingback Estipuñán, after another Dutch long clearance had ended up in a messy Timer turnover.

If you do as you did, you’ll get what you’ve got. That classic saying basically sums up most of the first twenty minutes of the second half. Ecuador continued to pressure the Dutch and outshot them five to zero in that time frame, including a bar-hit by Gonzalo Plata after Preciado ‘out-danced’ Daley Blind and put in a nice cross.

Steven Berghuis for Davy Klaassen was probably introducing the right player in the wrong place. With the pivot of Frenkie de Jong and Teun Koopmeiners left in place, this substitution didn’t address the real problem as the ball still didn’t reach the final third, other than by long passes to non-target men that were also not free in space.

While criticizing this approach might be sensible, the consequences for the tournament play as a whole should also be taken into consideration. A draw with Ecuador would still put the Dutch in pole position to win the group, with a final match against Qatar beckoning. Inserting Berghuis in the double pivot Two central midfielders next to each other. next to Frenkie might have been the better move in terms of chances to win the game, it would inevitably also increase the chances of Ecuador overplaying the midfield even more, and an even important as undeserved point get squandered. This would then increase the chances of finishing in second place in the group and facing significantly tougher opposition in the first knock-out match.

The 79th minute Marten de Roon for Teun Koopmeiners confirmed this theory, as the Dutch mostly played to hold onto their point from that moment on. With ‘just’ three Ecuador attempts after this sub, Van Gaal seemed to have finally corrected things, to a degree, and only from a defensive point of view. What also helped the Dutch cause was the understandable fading of energy from Ecuador. 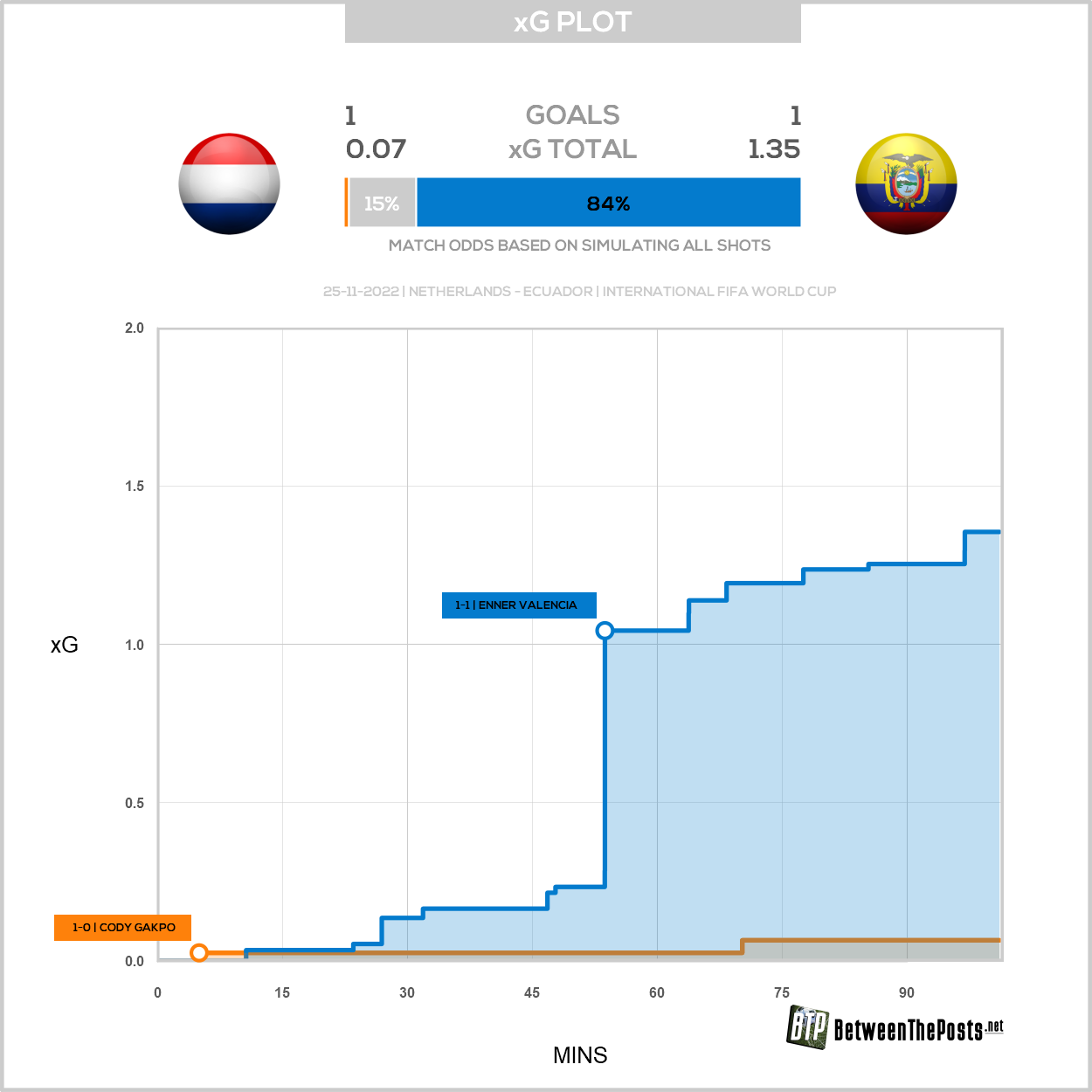 When good players suddenly have poor games, it’s very easy to single them out and question their performances. For many, it’s even very tempting to question their mindset on the day. However, in nearly all cases, it’s the tactical environment that makes them play in unfavorable circumstances, significantly limiting the outcome of the actions they make. Van Dijk didn’t have the passing targets in front of him that he has at Liverpool, Frenkie de Jong was completely bereft of support options besides him which made him an easy target to mark, Blind didn’t have the targets for short combination play to be the pressure resistant element that he can be, Klaassen was completely unable to exert his final third brilliance, and all of the mobile front players were out of reach behind a fence of well-positioned Ecuador midfield and front line.

Ecuador’s tactical switch to a back three formation proved to be completely on-point and their full individual commitment in combination with the astute circulation to a situational back four exposed all of the weaknesses in this Dutch side. Lacking quality off-ball midfielders, Van Gaal composed a setup that is highly dependent on playing on the possession side of things. While in the first game, against Senegal, the team had some sort of connection between defense and offense, on the night offensive transitions were very poorly executed and the Dutch ended up being completely played off the pitch, finishing the game with a historically low two scoring attempts.

An Ecuador win would’ve been rightly earned and such a result would’ve put them in pole position to win the group. However, with this draw, they would need to avoid a loss to Senegal to qualify for a knock-out game against the winner of group B, which could well be England. Despite their limitations on show for two games in a row now, Holland are on course for a group win and a knock-out game against group B’s runners up.

Use the arrows to scroll through all available match plots. Click to enlarge. Check the match plots page for plots of other matches. 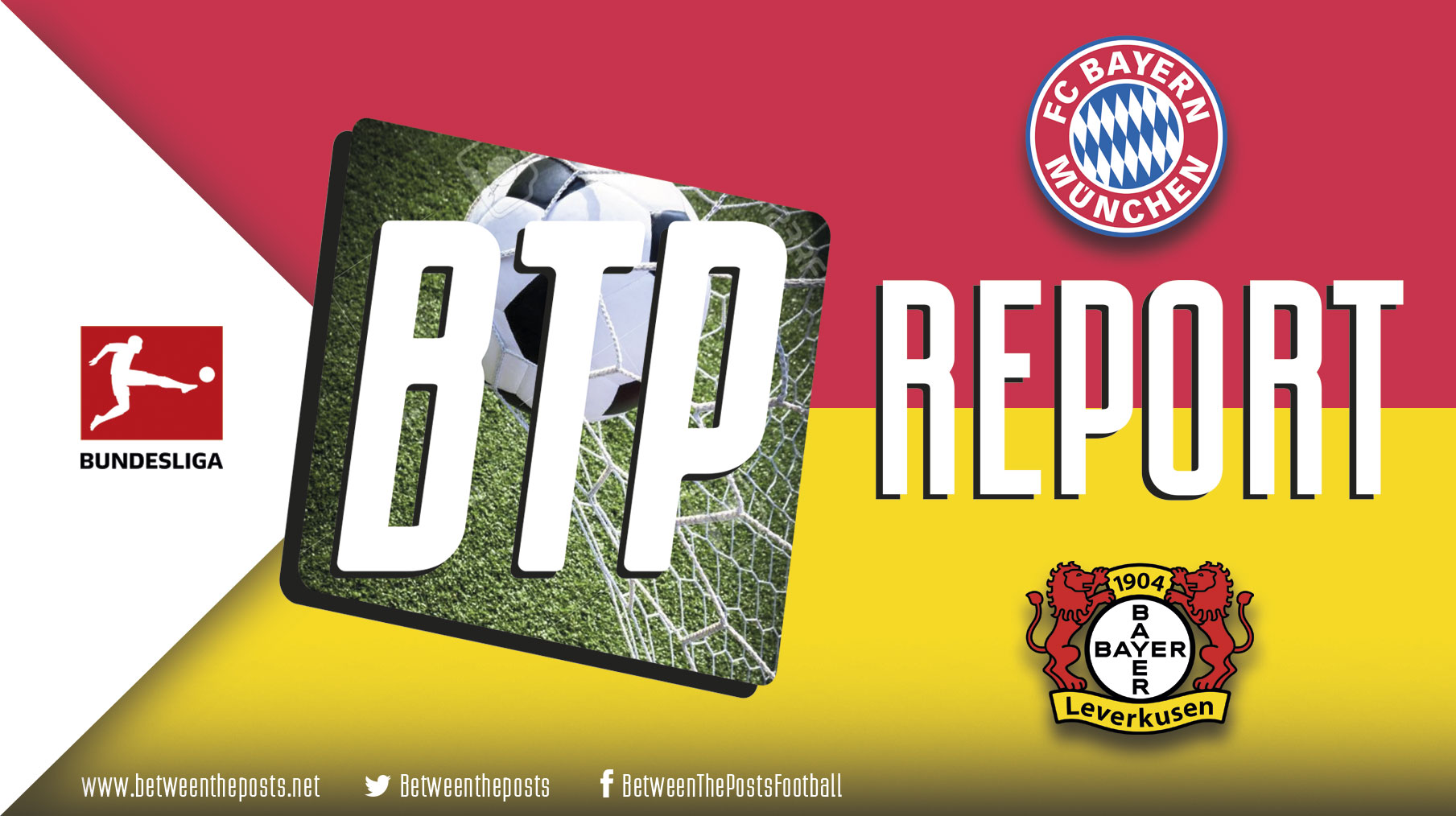