Chelsea were unable to cope with Spurs’ intense pressing, and Pochettino’s side netted two early goals, with some poor Chelsea defending. Spurs neutralised Chelsea by preventing them from playing their beloved central passing game, and constantly threatened on the counter with their talented forward line.

Maurizio Sarri’s Chelsea side came to Wembley having not lost a game since their last visit to this stadium, where they lost in the Community Shield to Manchester City. Despite a disappointing 0-0 draw at home to Everton before the international break, Sarri chose to name an unchanged lineup from that game, meaning that Kovacic was preferred to Barkley in midfield, and Morata preferred to a still goalless Giroud up front.

Spurs are performing roughly as one would expect in the league. The bigger problem for them this season has been their Champions League campaign, which was revived from the brink of elimination thanks to two late goals against PSV from Harry Kane. Mauricio Pochettino made a few changes from the previous league game, a 1-0 win over Crystal Palace.

Serge Aurier came in at right-back for Kieran Trippier, who had been taken off due to injury in the aforementioned game at Palace. Elsewhere, Victor Wanyama made way for Eric Dier, and Son Heung-Min and Christian Eriksen came in to replace Lucas Moura and Erik Lamela. 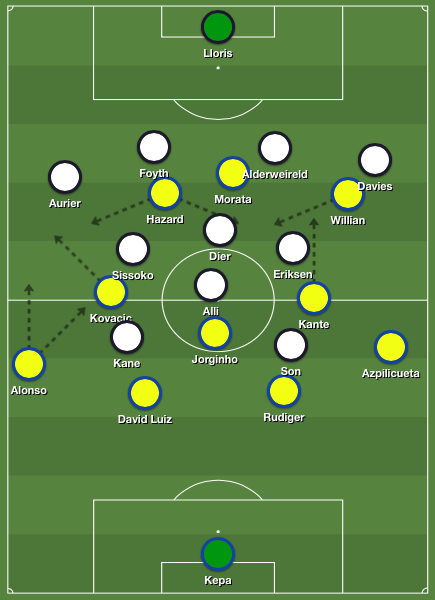 The tone for this game was set from the opening stages. Spurs’ high press forced Chelsea into ball-losses while trying to build from the back, and kept them pinned unusually far back in their own half. Pochettino’s side were rewarded for their proactive start when Dele Alli’s flick-on from an Eriksen free-kick delivery found the net.

Spurs defended in a 4-3-1-2 shape, with one of the key parts of their game plan being Alli’s man-marking of Jorginho. This is logical given Jorginho’s essential role in connecting Chelsea’s buildup. Furthermore, him being man-marked by opponents is likely to be the blueprint of a defensive setup that Sarri will face on several more occasions this season. Behind Alli, the midfield three of Moussa Sissoko, Eric Dier and Eriksen congested the midfield and made it very difficult for Chelsea to access central areas consistently.

As a result, Chelsea were forced into wide areas when trying to attack. In deeper defending, pressuring wide areas with a three-man midfield line can be difficult. If the side midfielder presses those areas he can open spaces between him and the central midfielder for the opponent to play back inside. If the full-back pushes up to press, opponents can run in behind him. As a result, great defensive intensity is needed when shifting to the wide areas so that the midfield doesn’t become disconnected, and potential space behind the full-back is covered if he moves up.

This is an aspect where Spurs excelled. Pochettino has spent the past years installing an elite pressing system at Tottenham, and this clearly paid off against Chelsea. The full-backs and side midfielders would pressure wide areas interchangeably. The midfield shifted well and Dier retained the defensive connection between himself and the side midfielders. In turn, Moussa Sissoko and Eriksen made sure to offer cover behind Aurier and Ben Davies when necessary. 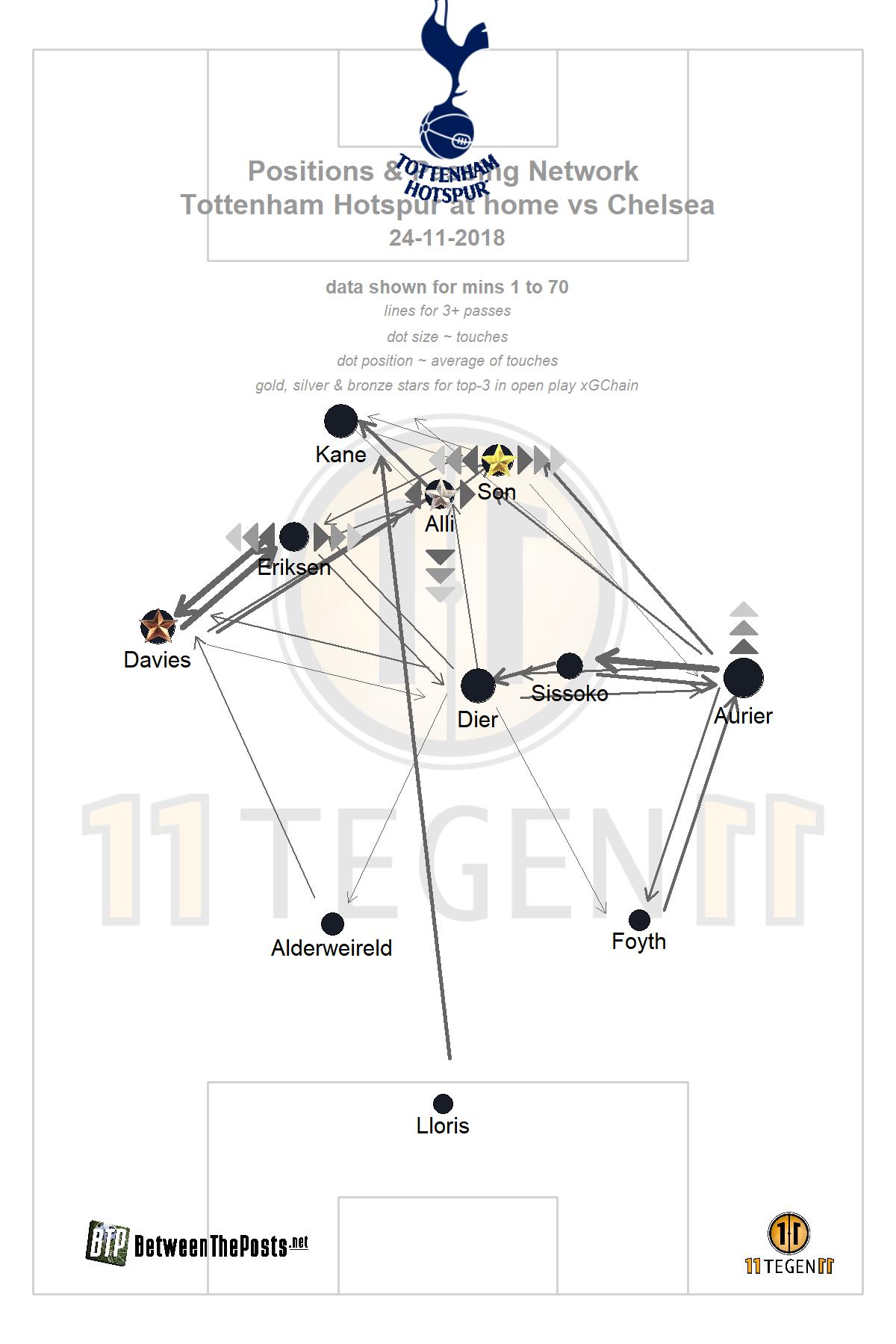 The midfield roles were also rather convenient for Spurs in terms of defensive workload. With Sissoko on the right side of the midfield, and Eriksen on the left, it meant that the defensively strong Sissoko would be up against Chelsea’s left side, which is where Sarri’s Chelsea – just like his Napoli side did – tend to carry the most threat, due to the attacking attitude of Marcos Alonso, as well as Mateo Kovacic and Eden Hazard tending towards this side.

A feature of Sarri’s system at both Napoli and Chelsea has been the pressing behaviour of Jorginho, who despite being nominally the deepest midfielder, will often push far out of his position when defending in order to pressure the ball.

This is not a case of spontaneous individual decision-making, but is a conscious part of Sarri’s zonal defending system, where midfielders are given licence to leave their nominal position to pressure the ball if it is in front of them. Hence players such as Kante can sometimes be seen moving up level with their own strikers during pressing when the opponent’s center-back has the ball.

When executed successfully this can have a stifling effect on the opponent’s possession. Even if there are gaps left in central areas, it can work as long as the opponent cannot access them due to high pressure on the ball and the passing lanes being covered by the pressuring players.

Alternatively, the opponent may not occupy these areas well enough to be able to exploit this. However, the big risk is that it can allow the opponent to access key zones in front of the defense if the press fails. 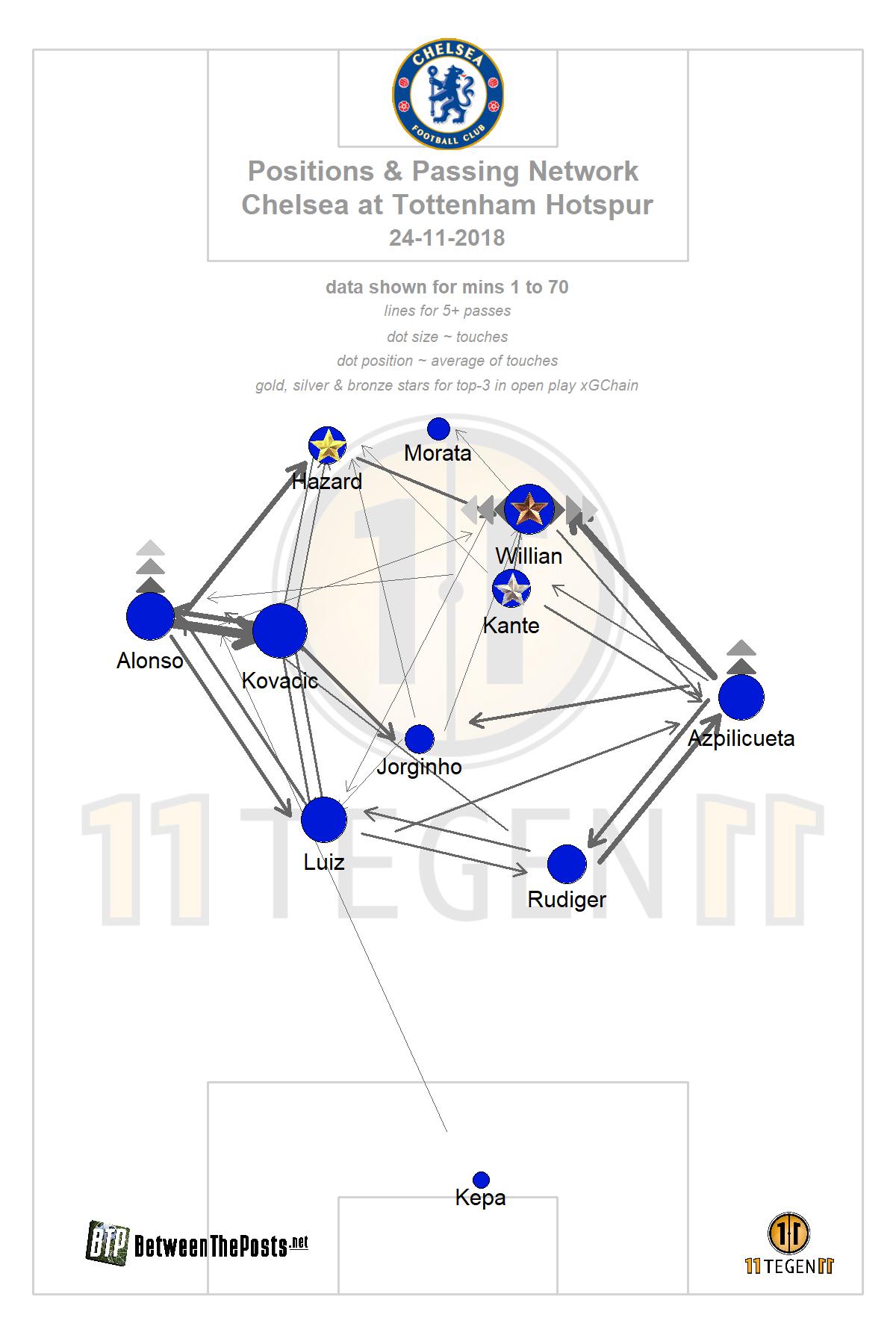 Chelsea’s problem in a nutshell, with Jorginho hardly involved in their passing.

Spurs are not a team that struggles to occupy the areas behind the opponent’s midfield. When in possession in their 4-3-1-2, the likes of Alli, Son Heung-Min and Kane occupied central areas inside Chelsea’s shape, with the full-backs offering the width. Eriksen could help the buildup from deeper in the left halfspace or move between the lines as well. Sissoko also had a deep starting position, but occasionally made diagonal movements to the outside ahead of Aurier, while Dier remained in place in front of the two center-backs.

In the 16th minute, Spurs showed the vulnerability in Chelsea’s zonal defense, specifically with the pressing movements of Jorginho. Chelsea’s defensive midfielder pushed out of his position to pressure the ball, only for Spurs to play around him and allow Kane to receive in space in front of the Chelsea defense. His shot from outside the box to put Spurs 2-0 up.

Spurs’ threat on the counter was present throughout the game. Chelsea were unable to deal with Kane and especially Son running in behind the defense immediately after Spurs won the ball, particularly in the channels behind Chelsea’s advanced full-backs. This left Jorginho and the two center-backs to defend some very awkward situations against Spurs’ dangerous forwards.

This counterattacking threat finally came into fruition early in the second half, when Son exploited Jorginho’s lack of mobility to glide past him with ease on the right-wing, before tricking his way past David Luiz’ rather lacklustre attempt at a tackle, to slot past Kepa and make it 3-0 to Spurs.

Given their lead, Spurs spent more time defending deep in the second half, and Chelsea looked to press for a way back into the game. Spurs were still protecting the center very well, and Chelsea could only really progress through the wings.

Taking this into account, it was a curious decision from Sarri in the 58th minute to remove Morata in favour of Pedro, meaning that Hazard would take up a ‘false nine’ role. It seems logical that if you can only attack through the wings, there should be a natural presence in the box who can threaten from crosses, which Chelsea did not have after this change.

This was soon amended by Sarri though, with the introduction of Olivier Giroud for Willian just under twenty minutes later, and sure enough, Giroud would go on to head home from an Azpilicueta cross.

Giroud’s goal was too little, too late for Chelsea though, and Spurs were always in control of this game, even if Chelsea had most of the possession. This result and the accompanying performance should give Spurs some confidence going into a massively important week for them, with a key Champions League clash against Inter on the horizon in midweek, followed by a North London Derby at the Emirates.

Despite this being only their first defeat of the season, the fact that there are issues with Sarri’s Chelsea side at this stage has been evident for a while. Defensively they can be unstable, and there seems to be a heavy reliance on certain individuals in possession, namely Jorginho in buildup, and Hazard to create in the final third. If one or both of these players are neutralised by the opponent, Chelsea can end up looking stale in possession, which is certainly not a characteristic typically assigned to a Sarri team.

Use the arrows to scroll through the expected goals plots, pass maps and other match plots.