League leaders Dortmund did not have to be anywhere near their best form to take away three points from Wolfsburg, as a solid defensive display after Reus’ first half goal was enough to seal the deal. Apart from two very small chances in the final fifteen minutes, Wolfsburg never came close to equalizing.

This season has been a mixed bag for Wolfsburg, really. After a very positive start and some early optimism about potentially competing for Champions League spots, Bruno Labbadia’s men failed to win in six consecutive Bundesliga games. A victory over Fortuna Düsseldorf last week and a cup win against Hannover could be the start of a new spell of good results.

Like most managers that are struggling to land a string of good results, Labbadia has been tinkering with his formation and personnel. For this game, he opted for a 4-3-3 shape and instructed his ‘wingers’ Josip Brekalo and Daniel Ginczek to come inside when Dortmund had possession.

Dortmund were league leaders going into this match, enjoying a one point lead over Bayern Munich. As has been the hallmark throughout his whole career, manager Lucien Favre fielded a 4-2-3-1 formation, this time with Marco Reus deployed as a number ten behind striker Paco Alcácer. Reus had absolute freedom to roam left or right, and could also be seen dropping between the central midfielders to distribute play from there. His favorite side to drift towards remains the left, of course.

Wolfsburg’s approach blocks off the center of the pitch

Whenever Dortmund had the ball – which they had for more than sixty percent during the opening half hour – Wolfsburg had the clear strategy to close off the center of the pitch. Their wingers tucked inside, close to striker Weghorst, and a flat line of three denied Dortmund access to the center. 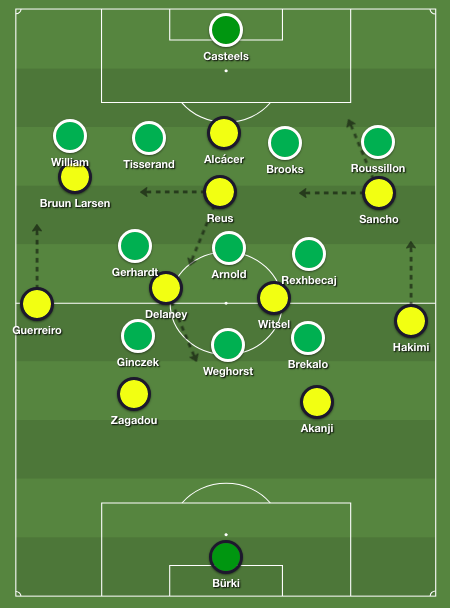 Wolfsburg’s 4-3-3 formation out of possession, which would become a 4-3-2-1 once Dortmund managed to get on their half.

During the first twenty-five minutes, this strategy was successful, as Dortmund were kept out of the final third The one-third of the pitch that is closest to the opposition’s goal. for most of the time. In later stages, the wingers would drop behind striker Wout Weghorst to provide a 4-3-2-1 formation. Whenever Dortmund did manage to progress the ball far on Wolfsburg’s half, Ginczek and Brekalo dropped back as well and a compact 4-1-4-1 or 4-5-1 formation was formed.

Wolfsburg’s defensive philosophy was not just about dropping deep, though. They never allowed Dortmund’s goalkeeper Roman Bürki an easy start to the build-up, as Wolfsburg’s three attackers would position themselves aggressively on the edge of the penalty area.

Dortmund likes to build up from their goalkeeper with a quartet consisting of their two central defenders and both holding midfielders, which gives them a numerical advantage – this time of five-versus-three. Despite this advantage, Bürki or one of the defenders opted to play a long ball in most of these situations, which led to a lot of turnovers.

Having a solid defensive plan is one thing, being able to translate winning the ball into creating scoring chances is clearly something else. Wolfsburg failed to capitalize whenever Dortmund lost the ball in precarious areas, and gave the ball away very easily throughout the match.

Wolfsburg were also not helped by the fact that Dortmund scored from their first real chance. After twenty-five minutes, Dortmund beat Wolfsburg’s press and the ball fell to Jadon Sancho on the left side of the field. Sancho – of course – managed to beat his defender one-versus-one and delivered a fine cross into the area. The ball was met by Thomas Delaney, who set up an unintended assist for an easy tap-in as Reus put Dortmund up 1-0.

The key for Dortmund when they play against a very defensive team is their double pivot. 4-2-3-1 is one of the most frequently occurring formations in football. The two most defensive midfielders are called a ‘double pivot’. When both of the holding midfielders – in this game Axel Witsel and Delaney – are positioned outside of the defensive block A defensive block is the compact group of defenders that defends a particular zone, either their own half in a medium defensive block, or the zone around their own box in a deep defensive block. that is put up by the opponent, Dortmund can struggle to create chances. This was an issue for some time in the beginning of the season, for example against Hoffenheim.

Against Hertha BSC last week – arguably one of Dortmund’s best matches so far this season – Mahmoud Dahoud was paired alongside Axel Witsel and he enjoyed the freedom to take up more advanced positions. Today, Delaney positioned himself more conservatively than Dahoud had done, which did not help Dortmund’s presence between Wolfsburg’s defense and midfield lines.

This is less of a problem, however, when leading and patiently circulating the ball against an opponent who, like Wolfsburg, struggle to create chances. For that reason, during the rest of the first half, Dortmund enjoyed a lot of sterile possession Sterile possession means that a team controls possession for a spell of time, but fails to create actual goal scoring chances or offensive penetration with it.. and did not get into trouble. 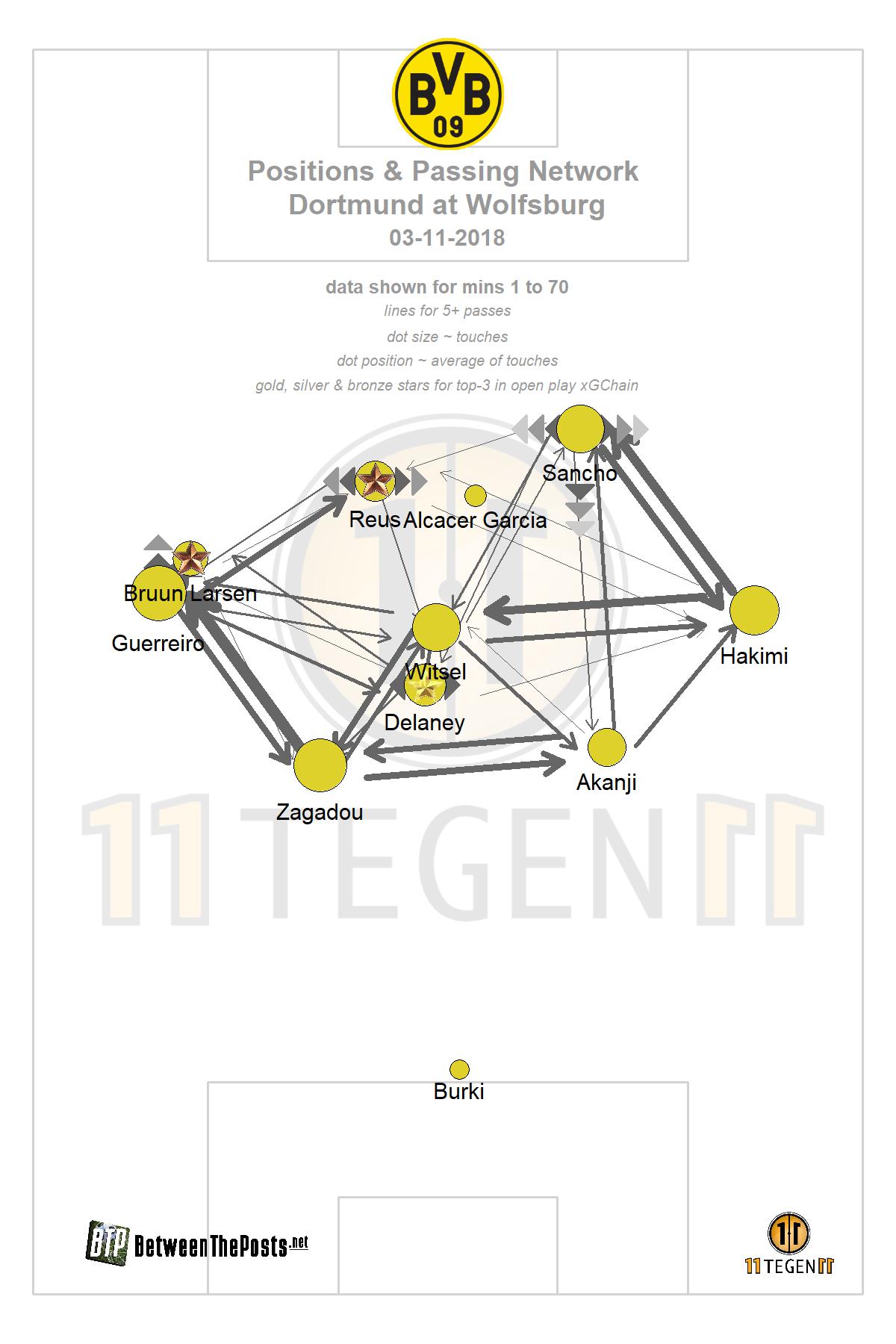 Dortmund’s passmap shows how well-linked they were, and how involved Reus and Sancho were.

Wolfsburg not able to spark the match into life

The second half as a whole was a very dull affair, to be honest. Wolfsburg had one very big chance to equalize, which came in the 54th minute after central defender John Brooks was able to connect on a corner kick, but could not score.

Bruno Labbadia’s side play a very predictive brand of football in possession. They lack creativity in the zone behind Weghorst, who is very much a striker that needs the players around him to create chances for him. The wingers do not enjoy positional freedom and the fullbacks are not great overlappers or underlappers. Underlap means that the full-back joins the offensive play by playing on the inside of the winger he supports. This is the reverse of an overlap, where the full-back plays on the outside and the winger moves inside.

Because Wolfsburg do not switch positions or try to overload the opponent in specific zones, they can be very easy to defend. And Lucien Favre is known for his very compact 4-4-2 formation in defense, as he uses at Dortmund. As a result, a lot of two-versus-two, three-versus-three and three-versus-four situations occurred on the flanks, which were not very hard to be dealt with.

Wolfsburg’s offensive strategy in the second half therefore mainly consisted of crossing early. In the 78th minute, one of these crosses met the head of Swiss international Renato Steffen, who came into the game as a substitute for the anonymous Elvis Rexhbecaj. Steffen headed the ball over the goal, but it was encouraging to even get a sign of life from Wolfsburg at this time in the game.

Since Dortmund gave up attacking altogether themselves in the second half, Wolfsburg kept believing in a draw until the final whistle. Their last moment came in the 87th minute, as Dortmund’s towering defender Dan-Axel Zagadou pulled the shirt of Wolfsburg’s central defender Marcel Tisserand when he attempted to head a ball inside the penalty area.

Zagadou had given away a penalty last week against Hertha BSC, which cost his team two points. This time the referee – and VAR – did nothing though and the non-given penalty turned out to be the last time Wolfsburg came close to scoring, as Dortmund kept their ranks closed until the end.

This was a match that never fully came to life. Dortmund was the better side for large spells of the match, without actually dominating chance creation. Sitting on their small lead, they easily saw out the game in the second half.

Wolfsburg played some very unenjoyable football in possession, as this is a team that looks like it is in a severe dearth of creativity. It seems like Labbadia has successfully instilled a solid defensive organization in his team – whether he can add offensive firepower will be the key question moving forward.

With two of Europe’s elite clubs being the next two opponents – Atlético Madrid in the Champions League and Bayern Munich in the Bundesliga – Dortmund will have to bring their A-game to the table this week. It was clearly not needed to perform at that level against Wolfsburg, as Dortmund played this game with their foot off the gas pedal for long spells.

Use the arrows to scroll through the match plots.