After going ahead early on, Internazionale impressed at the Camp Nou with their organization against the ball and their sequences of playing out from the back with possession. For much of the game, Barcelona were arguably second best, until second half changes from Ernesto Valverde and a couple of moments from inspiration from their attackers meant Barcelona were able to walk away with the win.

Barcelona and Inter were drawn into the same Champions League group last season, with Barcelona winning their home leg 2-0, and playing to a 1-1 draw in the away leg. Inter ultimately were unable to qualify from the group.

This time around Inter are a new look side though. Now coached by Antonio Conte, they have had high profile arrivals over the summer such as Diego Godín, Alexis Sánchez and Romelu Lukaku. Conte looks to be implementing his ideas swiftly, as Inter are currently top of Serie A with six wins from six. The only disappointing result prior to this game was their previous Champions League match, in which they only took a point at home to Slavia Prague.

Inter lined up in a 3-5-2 system as they have been doing under Conte. Godín, Stefan de Vrij and Milan Škriniar formed an imposing back three, with Nicolò Barella, Marcelo Brozović and Stefano Sensi making up a central midfield trio in front of them. Up front, Sánchez was given a start alongside Lautaro Martínez as Lukaku missed out through injury.

In Barcelona’s nominal 4-3-3 formation, Messi completed the front three alongside Luis Suárez and Antoine Griezmann. Ousmane Dembélé was also featured on the bench after his own injury troubles, meaning Ernesto Valverde had substantially more options to pick at the top end of the pitch than he has had in recent weeks. 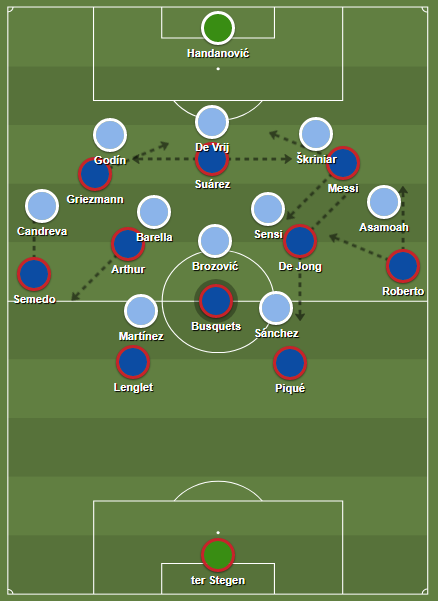 The tone for the first half was set in the first minutes of the game as Inter went 1-0 up almost immediately. The circumstances leading to the goal were somewhat fortunate, as Gerard Piqué intercepted a pass but deflected the ball straight onto the foot of Sánchez, who set Martínez free behind the Barcelona defense. A good finish past Marc-André ter Stegen made it 1-0 to Inter.

Barcelona naturally took most of the possession shares in this game, especially since Inter now had a lead to defend. Inter defended in a 5-3-2 shape which could also become a 5-2-1-2 given the marking assignments of Inter’s midfield on Busquets.

Barcelona had Messi with a free role coming from the right side, meanwhile Griezmann would also come into central areas from the left. This meant the width would be provided by the fullbacks. Against Inter’s narrow midfield and forward lines, the fullbacks also had a lot of responsibility in possession as they were often in space, especially if they dropped deeper.

The use of Nélson Semedo in a left back position with natural left backs Jordi Alba and Junior Firpo unavailable represented somewhat of an issue for Barca in attack. They were regularly able to get down the sides of Inter’s midfield, and Griezmann would open space for the overlapping movements of Semedo.

However, since Semedo is right-footed and seemingly uncomfortable using his left, attacks often slowed down somewhat on this side. Semedo’s unwillingness or inability to play in a more direct fashion due to not being suited to the positions he was picking the ball up in made him somewhat predictable and easier to deal with.

Messi naturally was also involved in the playmaking, dropping into midfield positions alongside the likes of Frenkie de Jong and Arthur to try to bring Barcelona’s attacks to life, but Inter’s 5-3-2 formation was hard to beat, especially in central areas once they established their defensive block, and as said, Barcelona’s threat in wide areas was not as strong as it might usually be. 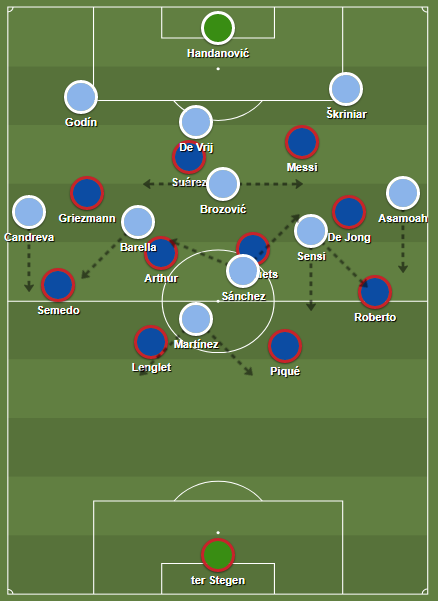 Inter playing out from the back

Aside from defending well, and despite not having large amounts of ball possession, Inter still put together a few impressive sequences in situations where they played out from the back.

In possession, they had Brozović in the number six position, with Barella and Sensi as mobile number eights ahead of him. Sánchez would often drop slightly deeper into the number ten slot, while Martínez was more likely to try and stretch the Barcelona defense running in behind.

Barca meanwhile pressed high up the pitch, usually in 4-4-2 or 4-1-3-2 shapes. As usual Messi would stay as a striker alongside Suárez when Barcelona lost the ball. This meant that one of the central midfielders, usually De Jong, would shuffle across to take up the right midfield slot to cover the space behind Messi. Griezmann meanwhile would usually cover the left side of midfield.

This left Barcelona nominally in a 4-4-2 shape, which would then become a 4-1-3-2 shape when one of the other central midfielders, often Arthur, would step up onto Brozović as the deepest midfielder for Inter. This left the remaining midfielder to cover a large amount of space in front of the defense, as well as in wide areas because Barcelona’s fullbacks would sometimes engage high in pressuring Inter’s wing-backs.

There were notable occasions where Inter were able to draw this deepest midfielder of Barcelona out of position with inside-to-outside runs from the likes of Barella. On a couple of occasions, he was able to drag Barcelona’s deepest midfielder into a wide area, which opened up the center of the pitch for Inter’s strikers to drop into and receive the ball.

In general, Inter’s use of combinations, third man runs, A passing combination between two players, while a third player simultaneously makes a run, usually in behind the opponent’s defensive line. After the initial combination, the ball is quickly played in depth for the third player to run onto. movements into width and depth were all very impressive as they put together impressive moves against Barcelona’s pressing to expose Barcelona’s backline in low number situations against Inter’s forwards.

As Barcelona came into the second half, it was looking likely that substitutes might be needed sooner or later to create something different against the defense of Inter. Valverde made his first change less than ten minutes into the half, and it was perhaps not the first one that would come to mind.

The Barcelona manager’s first move was to replace Sergio Busquets with Arturo Vidal. The Chilean did not slot into Busquets’ position though. Instead, his introduction meant that Barcelona switched to a 4-2-3-1 shape, with Vidal operating essentially as a number ten, with Messi and Griezmann either side, and De Jong and Arthur now playing as a double pivot. 4-2-3-1 is one of the most frequently occurring formations in football. The two most defensive midfielders are called a ‘double pivot’. 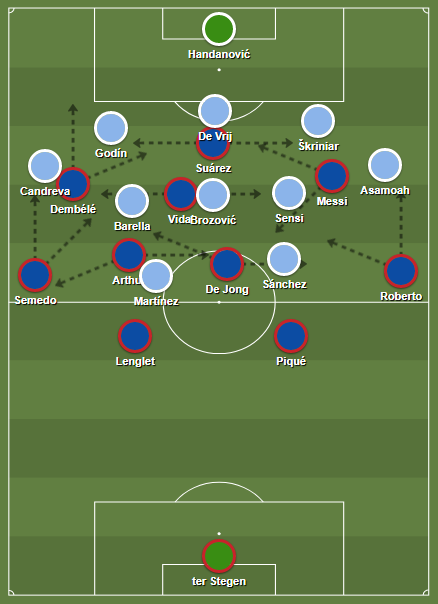 Barcelona in possession after Valverde’s changes.

Vidal added a presence for Barcelona in the final third The one-third of the pitch that is closest to the opposition’s goal. and around the penalty box. Without a lone Barcelona number six for Brozović to latch onto, he was also more likely to form a flat midfield three with the players either side of him and Inter in general were defending deeper.

The introduction of Vidal also added an extra element to Barcelona’s pressing and counterpressing, After losing possession, a team immediately moves towards the ball as a unit to regain possession, or at least slow down the pace of the counterattack. and the impressive buildup and counterattacking sequences seen from Inter in the first half were now less common.

Defensively, Barcelona were now slightly less balanced on the right. Messi was nominally the right sided player but did not track back, and it was less easy for De Jong to cover that side in a dedicated manner because he was now part of a double pivot. Sergi Roberto then had more space to cover on the right side, which could have been a problem in theory, but ultimately Inter were not able to exploit this.

Vidal also made an impact in assisting Suárez’ spectacular volley for Barcelona’s first goal to make it 1-1. Valverde’s next move after this was to take off Griezmann and replace him with Dembélé. The Frenchman added a more unpredictable element to Barcelona’s attack on the left side with his dribbling, where they had previously lacked threat in this area.

Eventually, after they carried on pushing for a winner, Barcelona found it. Predictably, it was inspired by a great assist from Messi, as he dribbled around Kwadwo Asamoah and Brozović to set up Suárez for his second goal of the game, leaving the final score 2-1 to Barcelona. 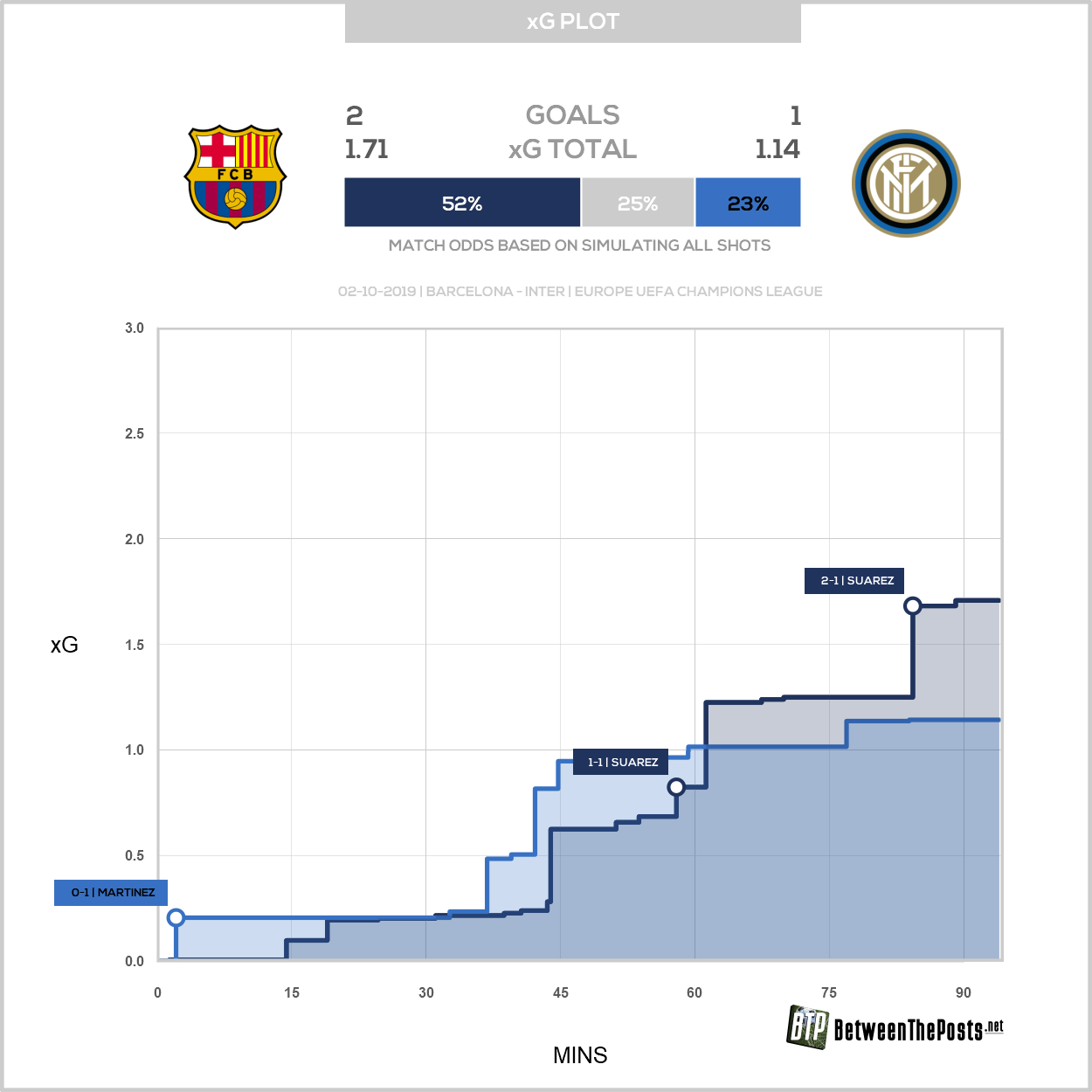 Barcelona requiring moments of individual magic to recover this game is testament to Inter’s organization, but also to their own deficiencies in finding a cohesive attack. The connection between Griezmann and his new forward partners needs time to improve, as Barcelona looked more threatening with Dembélé on the pitch than with Griezmann.

Inter were impressive, especially in the first half, where they showed some nice moments in buildup. They were well organized throughout the game, but ultimately the firepower of Messi and Suárez ended up defeating them in this game. 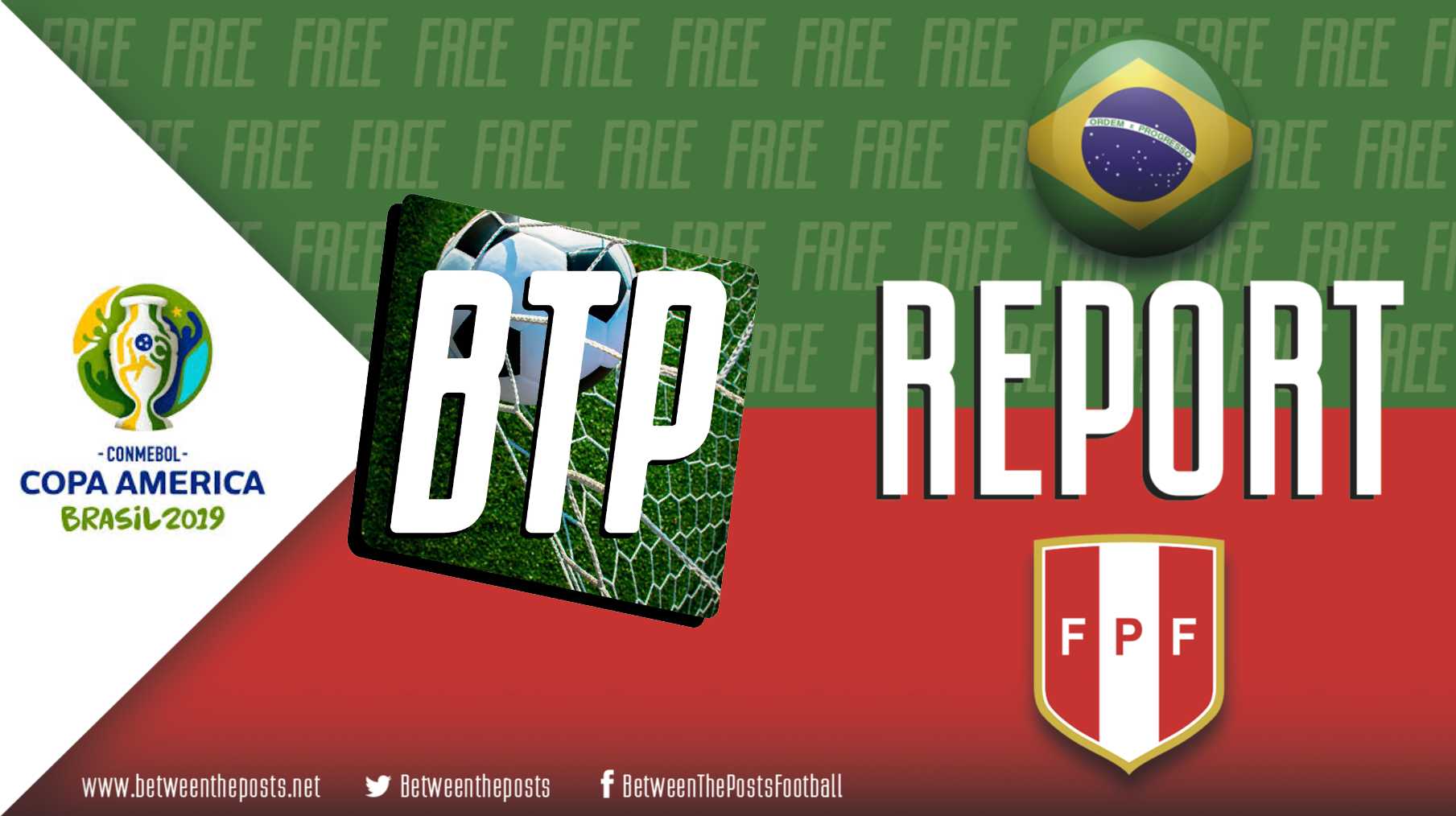 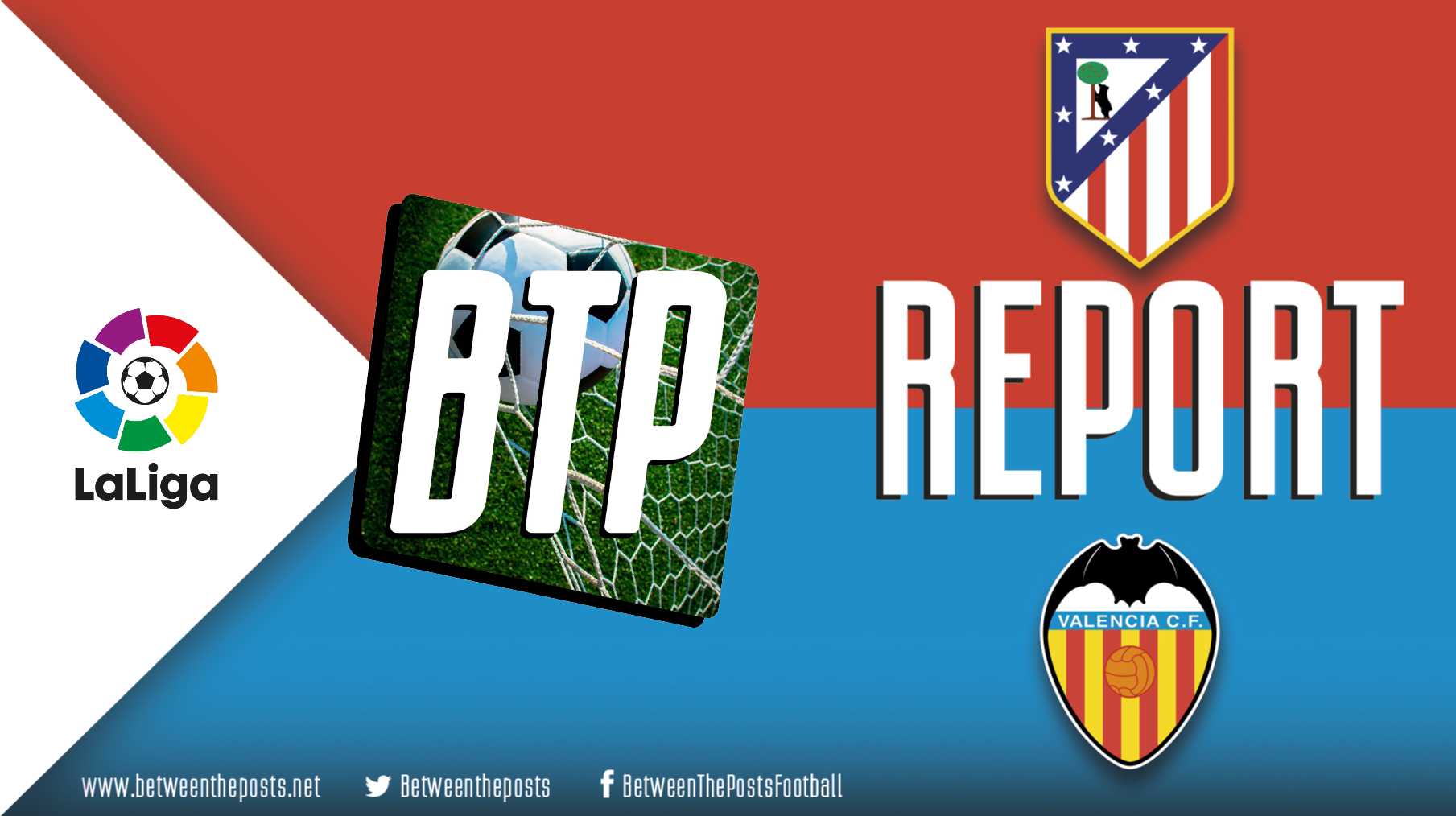