Bayern Munich have once again dominated Germany and Europe regardless of the opposition, but there are chinks in the armor that Bo Svensson’s Mainz sought to exploit. The result was a fascinating chess match where Mainz’s Plan A almost neutralized Bayern, before Jamal Musiala came through to deliver the win.

Though Bayern Munich have been exactly as dominant as expected, not all is right with the Bavarian juggernaut. There have been issues with the team that have threatened to surface since Joshua Kimmih went down with COVID-19, as progression and defensive transitions remain points of weaknesses that can be exploited by a wily opponent.  The loss to Augsburg and narrow wins over Freiburg and Arminia Bielefeld bear this out, though Bayern’s starters are of such quality that they have continued steamrolling opponents. For this game, manager Julian Nagelsmann made just one change from the team that beat Barcelona, with Lucas Hernández coming back into the side in place of Niklas Süle.

After a brief skid, Bo Svensson’s Mainz have stabilized for the most part. Their 6-3-6 record has them eight in the table, which is no mean feat given that they were briefly fighting relegation last season. Moreover, their style of play is precisely the kind of profile that can upset Bayern, and Svensson appeared to be targeting a win rather than be cowed down by Bayern’s evident superiority.

This showed as Svensson picked the same side that handed Wolfsburg a 3-0 defeat in their last game, as Moussa Niakhate, Alexander Hack and Stefan Bell were chosen as the central defenders. In midfield, Anton Stach was flanked by Lee Jae-sung and Leandro Barreiro, who in turn received support from wingbacks Aarón Martín and Silvan Widmer. Karim Onisiwo and Jonathan Burkardt led the line for the visitors in the usual 3-5-2 shape.

Under Bo Svensson, Mainz have developed the reputation of being an intense, proactive team, which they demonstrated well in an impressive first half.

Facing Bayern’s 3-1-5-1/3-2-4-1 structure, Svensson had Jae-sung push up alongside Onisiwo and Burkardt when Mainz were implementing their press. In this scheme, Burkardt was the central striker, with Jae-sung covering the left halfspace and Onisiwo marshalling the right. While the frontline matched up against Bayern’s front three, the midfield duo of Stach and Barreiro moved cautiously in closing off the center and guarding the halfspaces, with the Mainz wingbacks then covering Alphonso Davies and Kingsley Coman out wide.

Mainz’s high press. The proactive movement of the wingback and midfielder is visible, as is Jae-sung’s movement to become the third member of the frontline.

This forced Bayern to frequently push the ball wide to progress, since dropping and counter movements in midfield were well covered by the Mainz midfield and wingbacks. Should the midfielders be too narrow, the wide center-backs were comfortable in disrupting these sequences, winning possession back for the visitors. Passes to Leroy Sané and Thomas Müller between the lines saw them get swarmed immediately, while wingbacks Martín and Widmer were proactive in pressing Davies and Coman as soon as they received the ball. Winning these duels was vital for Mainz, since they largely relied on turnovers in midfield and the final third for their offensive sequences.

With Tolisso often settling into the defensive line as Benjamin Pavard and Lucas Hernández pushed wide, there were few options available through the middle, which shows in the pass map as Coman was the one who received the most amount of progressive passing. 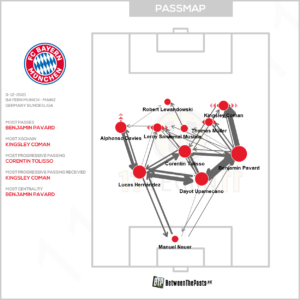 The Frenchman attempted a number of movements, including vacating the right wing in order to double up on right wingback Widmer alongside Davies and playing up front alongside Robert Lewandowski to create an overload against the defensive line. Musiala tried to receive on the turn and initiate offense in dangerous areas, while Sané took up different positions as he probed for areas where the coverage was soft.

Mainz’s low block, which was effective in combating Bayern’s movement between the lines.

None of these movements were successful against Mainz, who dropped into a 5-3-2 low block when pushed deep into their half. Here, the coverage of the center, halfspaces and wings was even better, as midfielders dropped into the defensive line when a wingback was pulled out for a one-versus-one situation. One strategy that Bayern deployed was Pavard and Hernández carrying the ball on their own against the sunken Mainz block, but once in advanced areas, they found that options inside were closed off and the only pass available was to the winger.

It is in facing these kinds of blocks that Bayern misses Kimmich the most, as the midfielder’s movements and positioning open up small pockets of space which stabilize the Bayern offense. The Bavarians are undoubtedly capable of scoring without him, but the volume of opportunities needed goes up in the German’s absence. In the first half, Bayern only had half chances through Davies and Müller, necessitating a rethink of the offensive approach going into halftime.

Bayern pull out the win

The struggles of the first half continued in the initial moments of the second half, where Mainz continued to shift between the 5-2-3 and 5-3-2 shapes depending on the location of the ball.

Svensson & #Mainz05 using a proactive approach to defending Bayern; playing man coverage with midfield and wingback support [WBs particularly effective v. Davies & Coman] to keep #Bayern from slicing through them.
Very effective in the first half, where #Mainz05 went up 1-0 pic.twitter.com/zQCc3VPekU

There was even a moment when their press flustered Bayern, but Neuer remained calm and played himself out of danger. Bayern’s equalizer, when it came, was unexpected and seemingly against the run of play. After another attack fizzled out, Mainz tried to break forward, only for Hernández to win the duel. Tolisso’s raking ball found Coman behind the defense, and the winger’s emphatic finish through the keeper’s legs allowed Bayern back into the game.

Despite the scoreline, the game state remained largely unchanged since Mainz kept to their method. A spate of substitutions for both teams saw some fresh legs but no change in approach. Marc Roca’s introduction offered some more sideways passing than the forward-thinking Tolisso, but it was ultimately a moment of brilliance from Musiala that saw Bayern take the win. The midfielder cleverly received the ball before slotting it just beyond the keeper’s reach. While it gave Bayern the win, the scoreline did not disguise the fact that this was one of the Bavarians’ weaker performances, and definitely a drop from the imperious levels shown in the early part of the season. 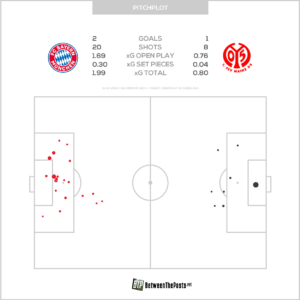 Mainz deserved more from this game, but Bayern did what they always do to Bundesliga competition. Still, Svensson buttressed his credentials as a manager on the rise, and Mainz look poised to steer well clear of any relegation scraps. On the other hand, Bayern need Kimmich to return soon, or at least add some quality depth in the upcoming transfer window.