Bayern Munich’s tie with PSG pitted two of Europe’s superclubs against each other, promising a clash of the titans. What unfolded over ninety minutes on a snowy night in Bavaria was a feast for the eyes. Five goals, a deluge of chances, and moments of individual class produced a superb spectacle, leaving the contest on a knife’s edge going into the second leg.

Coming into the final stretch of the season, Bayern are once again fighting on multiple fronts. Edging past RB Leipzig in the weekend’s topspiel, a ninth Bundesliga title in a row is on the cards. Likewise, they have continued to hit the right notes in Europe, coasting past Lazio 6-2 over two legs in the last round. Now facing the finalists from last season, they looked to make a firm signal of their intent.

PSG find themselves in a similar place at this stage of the season. Losing 1-0 to Lille on the weekend, their battle to regain the league title goes on. Progress into the last eight of the Champions League was far more of a formality after humbling Barcelona in the first leg. Taking revenge for the remontada of 2017 in that tie, they now looked to make the first step in avenging their loss from the final last year.

Hansi Flick set up the home team in their usual 4-2-3-1 shape. After four days of rest from the match against Leipzig, he opted to pick the same starting lineup. With Serge Gnabry out of the side due to a positive test for COVID-19, the manager put faith in Eric Maxim Choupo-Moting once again to lead the line in place of talisman Robert Lewandowski.

PSG manager Mauricio Pochettino also set up the guests in a 4-2-3-1 system. He made three changes to the team that started the game on the weekend. At the back, Thilo Kehrer dropped to the bench, making way for Colin Dagba. Elsewhere, suspension ruled out Leandro Paredes, leaving a midfield spot for Danilo Pereira to fill, while Julian Draxler came in for Moise Kean.

The first three minutes of the game saw end-to-end action, offering a snippet of what to expect during the game. From their first attack of the game, Bayern had already started to lay siege on PSG’s goal, as a switch of play to Lucas Hernández eventually drew a save from Keylor Navas. Joshua Kimmich then swung in a corner onto the head of Eric Maxim Choupo-Moting, whose effort hit the crossbar.

But moments later, they had fallen behind. Their high press forced a long ball, which Hernández headed to Kimmich. But Neymar nicked the ball, playing a one-two combination round the corner with Angel Di María before driving into the final third. The one-third of the pitch that is closest to the opposition’s goal. Drawing markers centrally, he slid in Kylian Mbappé to his right. Neuer dived to smother the shot, but it squirmed under his body into the net.

Without Marco Verratti in the side due to testing positive for covid-19, the midfield duel swung further in Bayern’s favor coming into this game. As such, despite the early setback, the home team set about making their mark on the match. PSG defended in a 4-4-1-1 shape, where Neymar operated as the ten behind Mbappé.

The Bavarians camped in PSG’s half of the pitch, moving the ball at speed with their usual focus on wing play. From the ball carrying of central defenders at the back triggering interchanges to diagonal switches, the home team continually pushed PSG deep into their half. Peppering their box with crosses, Bayern pinned PSG deep, looking in prime position to score an equalizer. 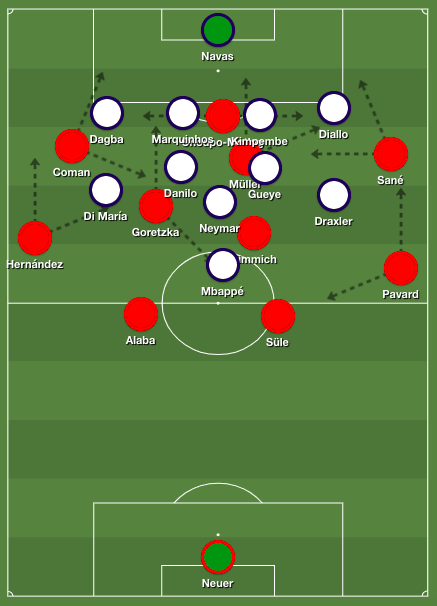 Bayern’s 4-2-3-1 offensive structure from the first half hour.

But for all their territorial control, Bayern had to be wary of the looming threat Neymar and Mbappé posed to their back four. In organized phases, phases off the ball, Bayern would press in their usual 4-2-3-1 shape. The wingers would often close down the central defenders with curved runs, while Müller and Choupo-Moting covered the two central midfielders. PSG then set up with a narrow front four ahead of the double pivot, pulling Draxler and Di María into the halfspaces. If you divide the field in five vertical lanes, the halfspaces are the lanes that are not on the wing and not in the center. Because there is no touchline like on the wing, players have the freedom to go everywhere. But this zone often is not as well-defended as the very center. This makes it a very valuable offensive zone to play in and a lot of chances are created by passes or dribbles from the halfspace.

But while Bayern’s intensity stymied PSG’s chances of getting into their rhythm, the drawbacks of their aggression were also evident. Failing to control several of the visitors’ transitions, Mbappé was free to make runs across the backline, pulling the central defenders out of shape as Neymar had space to progress the ball forwards.

In the 27th minute, the two linked up to breach Bayern’s backline once again. Winning a free kick deep in his half, Neymar hit a ball down the right to Mbappé, who rounded Süle before breaking away into the box. Alaba cleared his cutback, giving PSG a corner.

Bayern defended the short corner, cutting out Mbappé’s cross well, but did not count on a moment of magic. With one glance, Neymar nonchalantly whipped a cross over the defense to Marquinhos, who slotted home.

However, the captain’s night was cut short. Minutes later, he fell to the ground, coming off due to a groin injury. Pereira dropped into the back four, while Ander Herrera replaced him in the double pivot. Flick then made a change as Leon Goretzka made way for Alphonso Davies. The left back pushed Hernández into central defense next to Süle, while Alaba moved forward next to Kimmich.

Bayern kept probing, finally getting the goal they were looking for. In the 37th minute, Davies broke forward from deep, finding Coman, who in turn played a pass into Kimmich, and then Pavard. The right back picked his head up from an inverted position, curling a cross into the path of Choupo-Moting, who buried a header past Navas between the posts. The home team had cut the deficit in half.

A second muscle injury for the Bavarians in ten minutes saw Jérôme Boateng come on in place of Süle. But the impetus was in their corner, with an enticing second half in the offing.

More of the same

The second half began as the first half ended, with Flick’s men dominating the ball while making tweaks to their structure. Müller began making more movements between the lines to the left, rotating with Coman in the halfspace, while Davies flew up and down the sideline. The double pivot also set up asymmetrically, with Kimmich centrally and Alaba pushing up higher between the lines.

Indeed, the pressure told once more on the hour mark. Sané slipped a pass into Müller, who bent a cross towards the far post after pivoting on the ball. Pereira headed the ball away from immediate danger, but a mix-up between Herrera and Dagba saw Bayern regain possession. Pavard laid claim to the ball, colliding with Draxler, who gave away a free kick. Müller ghosted onto Kimmich’s delivery, heading the ball into the net to bring the sides level. 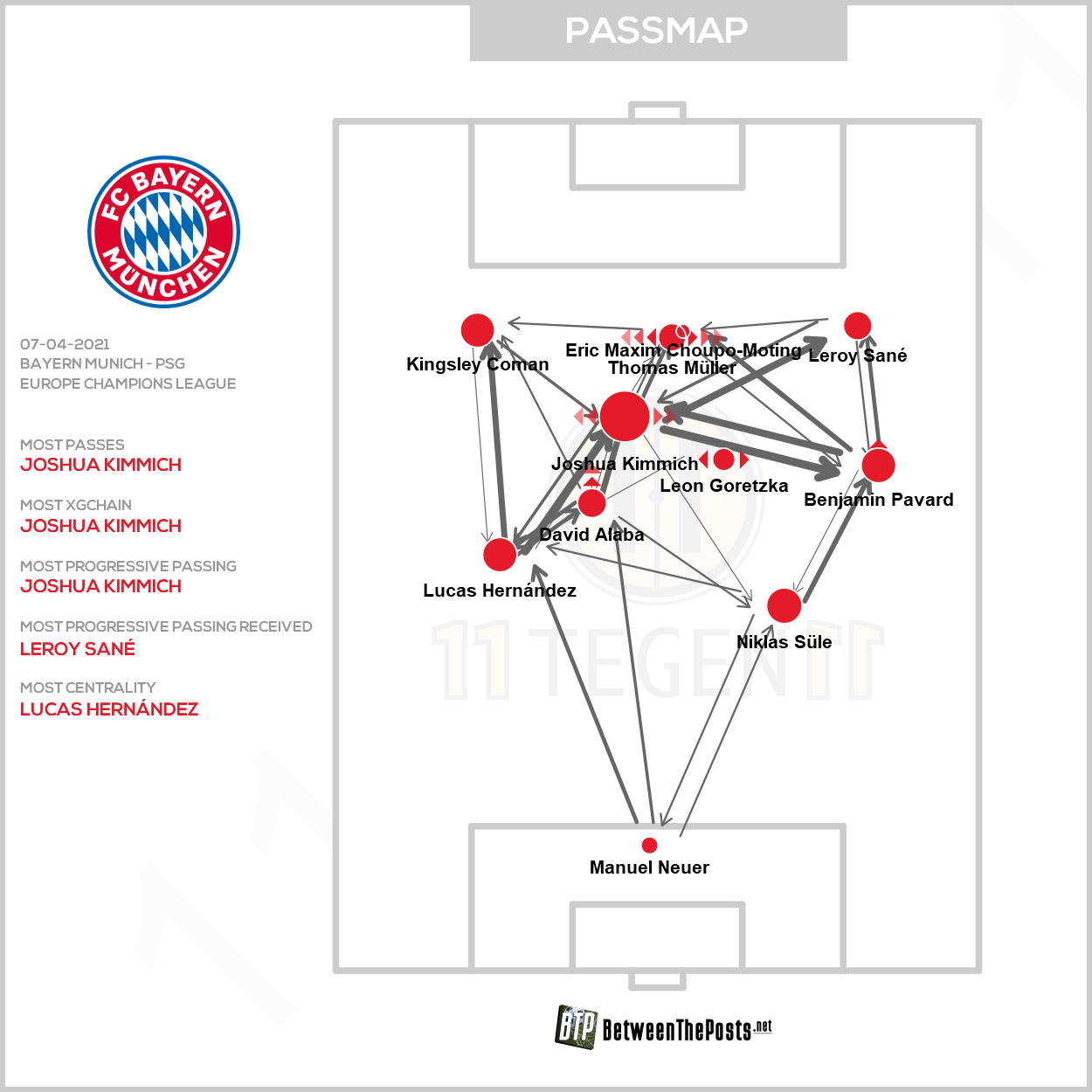 PSG stayed under the cosh, but as Bayern racked up the shot count, their backline fell foul of another transition. Alaba clipped a diagonal ball towards Müller, but Mitchel Bakker nodded it away into the path of Draxler. The left winger twisted away from Pavard, setting away Di María on the counter.

He then played a first-time pass into the path of Mbappé, sending his teammate into the final third. The striker checked inside Boateng, freezing Neuer between the posts before driving a shot into the goal. The golden boy was at the double, putting the visitors back in the lead.

With a little over twenty minutes left to go, Bayern would have to go again, while PSG now hoped to survive another impending wave of Bavarian attacks. Going into this phase, Pochettino took off Di María, putting Moise Kean on the right flank in his place.

Along with Mbappé and Neymar, the substitute offered his team moments of respite with the ball, but Bayern continued to create chances for most of this time. However, a lack of composure in the box and an inspired display from Navas denied the home team, giving PSG a precious victory. 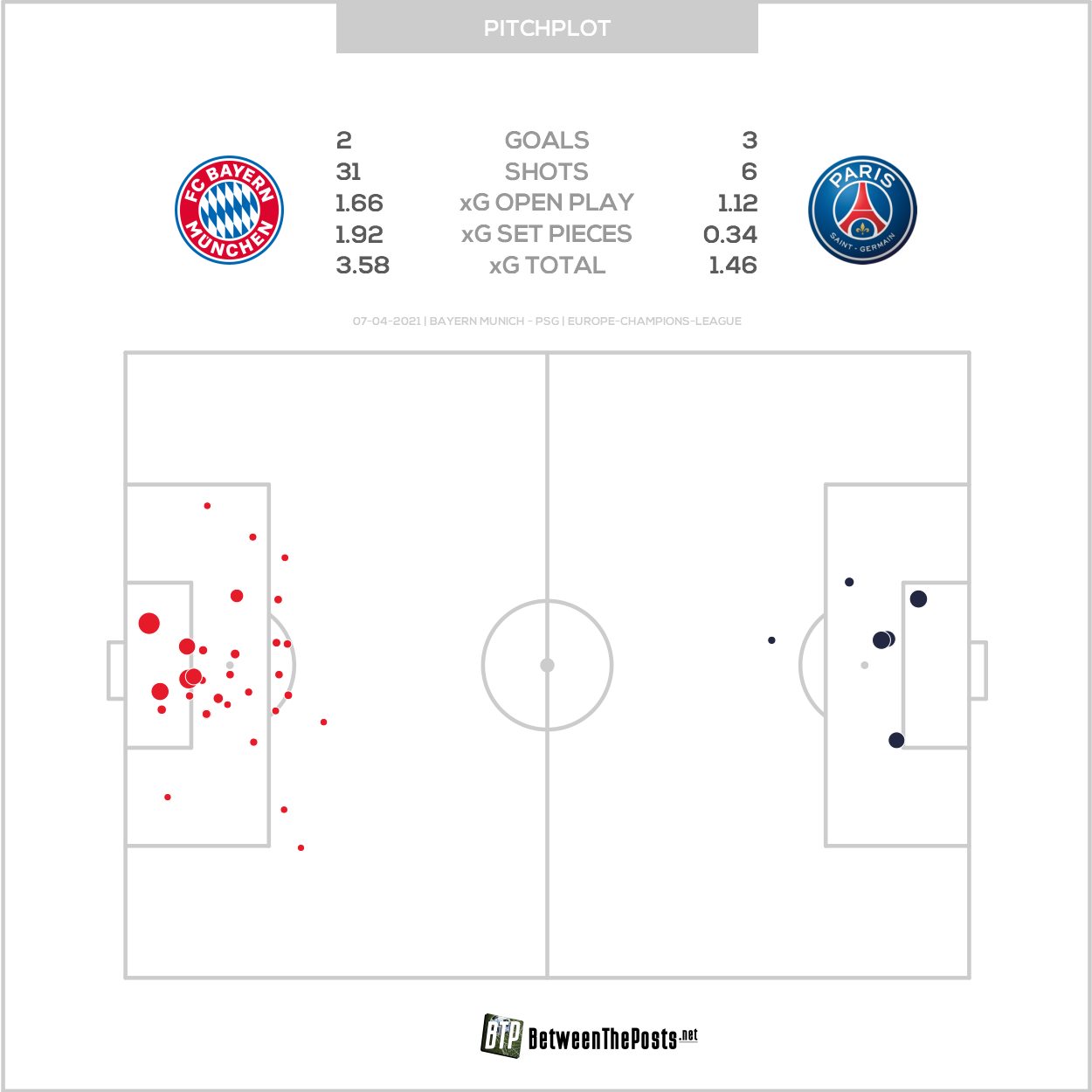 This narrow loss will be a bitter result for Flick’s men. Not only have did this defeat bring an end to the Bavarians’ unbeaten streak under his tutelage in Europe, but it also leaves them on the back foot going into the second leg. However, their dominance was evident throughout the game. Even without Lewandowski, greater efficiency in the final third gives them every chance of turning the tie around.

PSG managed a superb result. Scoring three of their five shots on target, Mbappé and Neymar’s class worked in tandem to mitigate Bavarian dominance. But with three away goals in the bag and the threat on the break against the champions looming, they will be confident of getting the job done. 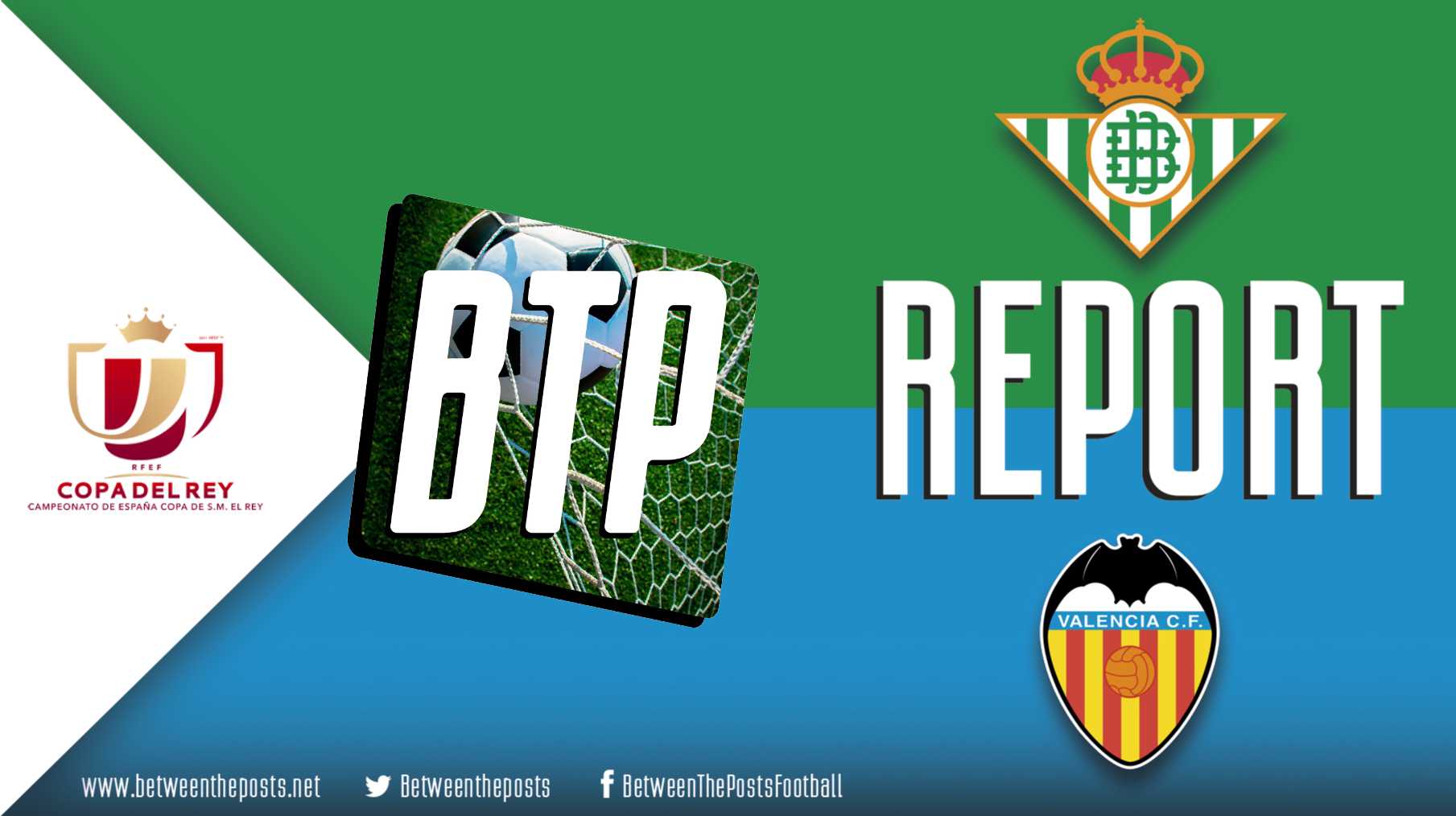 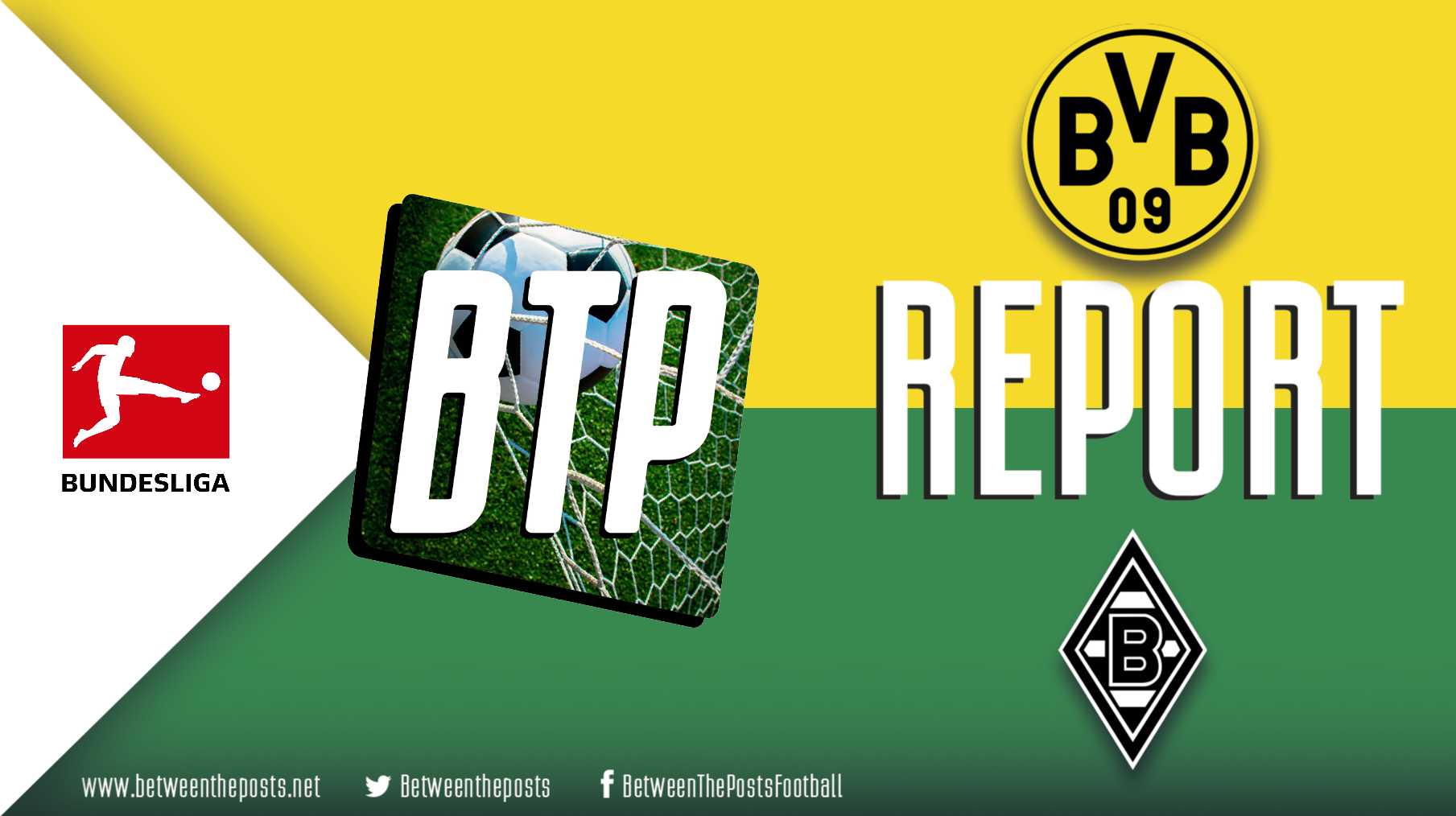