The clash of two methodical setups on a mild afternoon in Copenhagen gave the impression that Spain’s match with Croatia would be a terse affair. But, the contest could not have gone any more differently. In a matchup of needless excitement, blunders from the back and suspect game management gave way to one of the most thrilling spectacle of EURO 2020.

Though they finished in second place in Group D, Croatia’s run to the Round of Sixteen has been far from convincing, as Scotland made Zlatko Dalić’s men sweat in getting to this stage. After a drab loss to England and a draw to the Czech Republic, the signs are not reassuring. But having gone all the way to the final of the last World Cup, the hope was that muscle memory could pull the team through here.

Spain, too, had their fair share of issues to reach the knockout stage. Dominant displays against Sweden and Poland conformed to expectation, but just two points and one goal raised the stakes of their final match at home to Slovakia. Here, Luis Enrique’s men got their due reward. Watching his men coast to a 5-0 win, he will look to that result to form the basis of a deep run in the tournament.

Dalić set up his players in a 4-1-4-1 shape. The manager then had to make two changes to the starting eleven that won 3-1 over Scotland. A suspension left Dejan Lovren out of the running after picking up two yellow cards, with Duje Ćaleta-Car taking his place. Ivan Perišić also was absent from the lineup after testing positive for covid-19, leaving a spot on the right wing for Nikola Vlašić to fill.

From the other dugout, Enrique went for his usual 4-3-3 setup. At left back, Jose Gayà replaced Jordi Alba to make his first start for Spain in the competition. The only other change was in the frontline, where Ferran Torres came back to the fold. For this contest, he started off on the right wing, sending Pablo Sarabia out to the left in place of Gerard Moreno.

A trident of Mateo Kovačić, Marcelo Brozović, and Luka Modrić seems as good as any paper to duke it out with Spain for command of the midfield. However, the signs of their side’s display suggested this would be far from the case.

The Croats lined up in a 4-1-4-1 system, dropping off into a medium block. A medium block refers to a team that retreats in their own half out of possession, generally only disrupting their opponents some way into their own half. Here, Nikola Vlašić was prone to defending too strictly man-for-man against Gayà. Further afield, it meant the four central players often had to manage Spain’s ball circulation alone. To the left, Kovačić held back, only moving out if Koke or Busquets demanded the ball. To the right, Modrić had the most active role in pressing, looking to shadow Pedri.

Enrique’s men relied on their usual calm control of the play. But while their strategy was the same, the initial approach itself was different. Rather than acting as the tip of a buildup triangle by standing behind Bruno Petković, Sergio Busquets would drop to the right of the two central defenders.

This movement would trigger several other adjustments. Since Busquets had moved over to the right halfspace, If you divide the field in five vertical lanes, the halfspaces are the lanes that are not on the wing and not in the center. Because there is no touchline like on the wing, players have the freedom to go everywhere. But this zone often is not as well-defended as the very center. This makes it a very valuable offensive zone to play in and a lot of chances are created by passes or dribbles from the halfspace. Koke then shifted the other way into the center. In the meantime, Azpilicueta bombed down the right flank, inviting Torres to move inside between the lines.

The synchronization of the movements hinted that Enrique had planned out this structure, but his men shelved this variant quite early on in place. Other patterns arose, but Spain dominated all the same. And with control of possession, shots on goal began to rack up. Fifteen minutes in, Koke crept into the box, firing straight at the goalkeeper, while Álvaro Morata spurned a headed chance soon after.

Then, out of nowhere, a freak occurrence affected the scoreline. Pedri passed back to Unai Simón, looking to reload the play. But the man between the posts had a nightmare moment. Letting the ball bounce over his right foot, the goalkeeper let it go into the back of the net. Croatia had taken the lead.

Luckily for Enrique, his men soon gained back their cool, pinning their opponents back once more. A different structure, which the manager set out against Slovakia, was now on display. Torres stayed high and wide on the right flank as normal. Behind him, Azpilicueta tucked inward next to the central defenders, pulling Anté Rebić more centrally.

Turning the screw, Spain equalized in the 38th minute. Sarabia and Koke linked up before shifting the ball into Pedri. The former laid the ball out to Gayà just inside the box, who rifled a shot at goal. Dominik Livaković parried his effort only for the winger to follow up and rifle home the rebound. 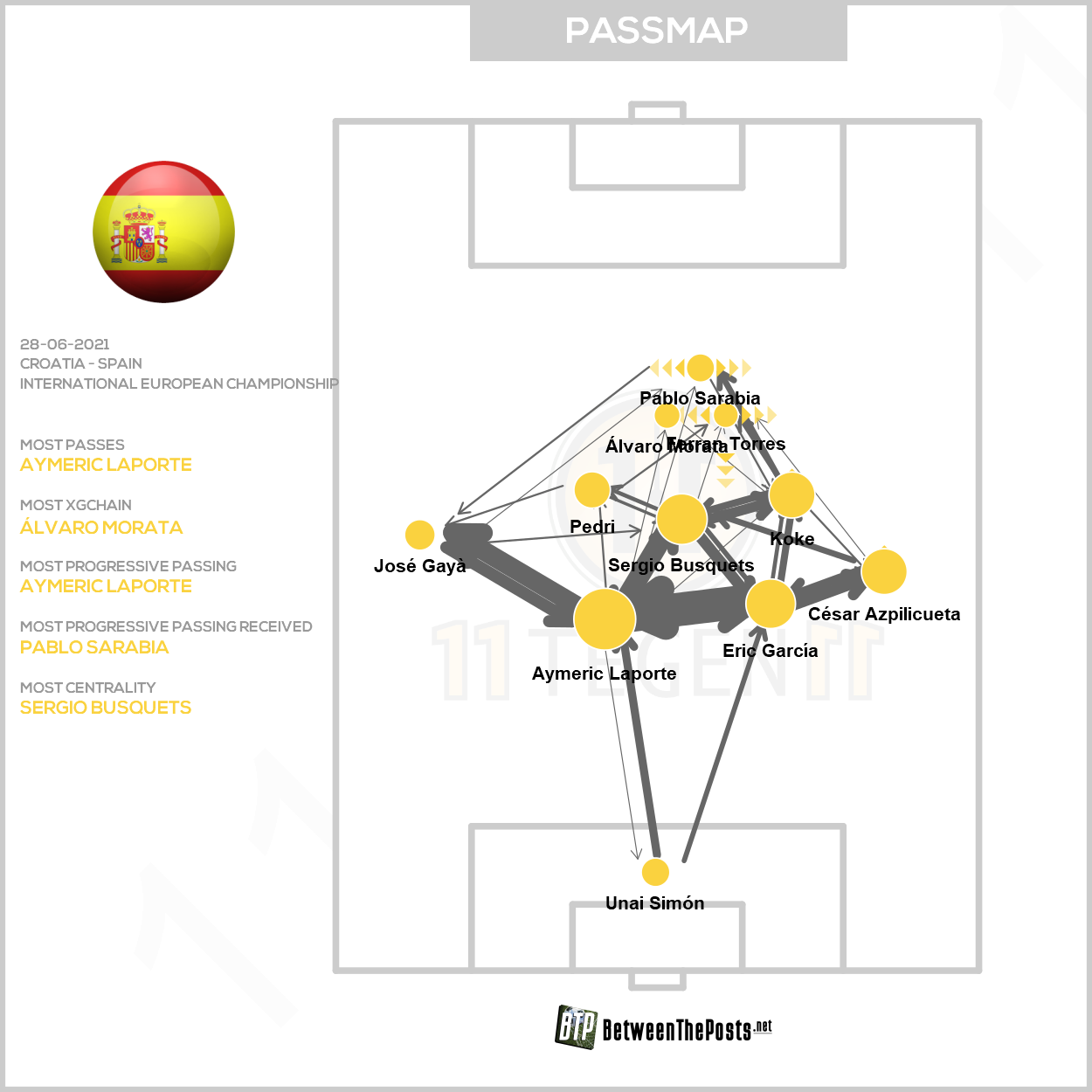 After half-time, a marked adjustment from Dalić’s men saw them engage far higher up the pitch. Unfortunately for them, they ran into one of Spain’s great strengths in the form of the buildup phase. Here, the fullbacks and wingers stretched the field, while the midfielders were the first port of call to break the press. Otherwise, aerial switches of play to the winger away from the ball set the tone.

Moreover, from here, Spain would attack space purposefully to move up the pitch. These aspects of their possession game all came together in a neatly crafted move during the 56th minute. Receiving from Simón, Azpilicueta twisted inside, driving diagonally to the center before releasing the ball to Pedri. The midfielder then found Torres, who whipped a cross into the six yard box, where the right back thundered a header home. Scoring his first goal for his country, he had handed Spain the lead.

Spain looked truly in their element at this stage but only a goal difference still stood between the two teams. Enrique made two straight swaps at the 72nd minute as his first changes of the match. Sarabia made way for Dani Olmo, while Pau Torres switched in for García, playing left of Laporte. Just over three minutes later, it seemed that the alterations had delivered a decisive impact.

Standing inside his half, Torres pinged out a raking switch of play to his namesake on the right from a dead ball. The winger beat Joško Gvardiol to the pass, bore down on goal, and then placed a shot under Livaković into the net. Now two goals to the good with under a quarter of an hour left to play, Enrique’s men looked to have sealed the result.

Today I’ll be posting some highlights from the amazing Round of 16 at #EURO2020.
First, Spain’s third goal in the crazy 5-3 match vs. Croatia. Great assist from Pau Torres to Ferran Torres, with Croatia’s defense completely asleep… #ESP #CRO
-Powered by @MetricaSports ATD pic.twitter.com/1lR2zA23Zv

Putting the pain in Spain

But the last fifteen minutes of normal time did not prove to be so smooth. Watching Croatia’s chances dwindle by the minute, Modrić would not go down without a fight. From a throw-in to striker Ante Budimir, he darted into the box, cutting the ball back across to a melee just short of the goal line. Budimir could not force an effort home, but Mislav Oršić did. Game on with six minutes left to play.

Brozović found substitute Mario Pašalić, setting off one last Croat attack. Oršić then clipped in a delivery from the left, teeing up Pašalić to steer home a dramatic leveler. Thirty minutes were still in the offing, and plenty more madness yet to ensue.

A highly offensive alignment had dragged Croatia back into the game. But facing another half hour in this contest, its drawbacks became evident. Above all, Josip Brekalo, a left winger for Wolfsburg, was now at right back. Spain got back into their groove, punishing this setup in the 100th minute. Olmo curled a precise cross to the back post, where Morata pounced on Brekalo’s unease. Steadying himself, the point man came clutch with a volley into the roof of the net.

In a buoyant mood, Morata had not finished making his mark on this duel. Two minutes on, he held up the play, misdirecting defenders to slip Olmo in behind. The winger hit another precise delivery, finding Mikel Oyarzabal, who picked out the bottom left corner. This time Croatia had no answer. 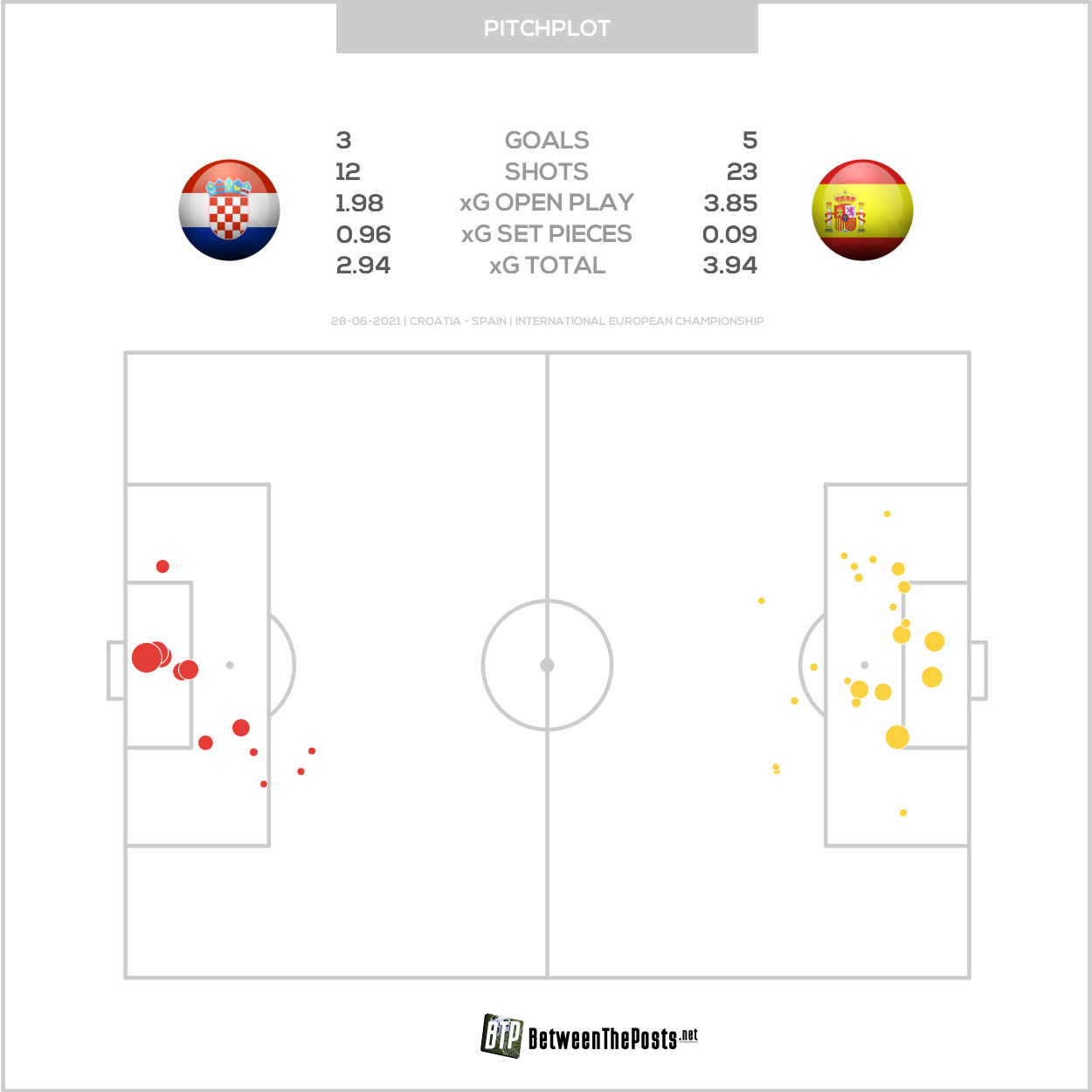 Failing to click into gear throughout the tournament, Croatia’s bid for the trophy ends here. In the end, the team with superior organization and control won out, leaving Dalić to reevaluate going forward.

While they should have wrapped up the win in ninety minutes, Spain again imposed their will on a game for the vast majority of the play. This almost unique ability in the tournament so far is a valued asset, and now having booked their place in the last eight, they will look to keep their EUROs bid alive by beating Switzerland. 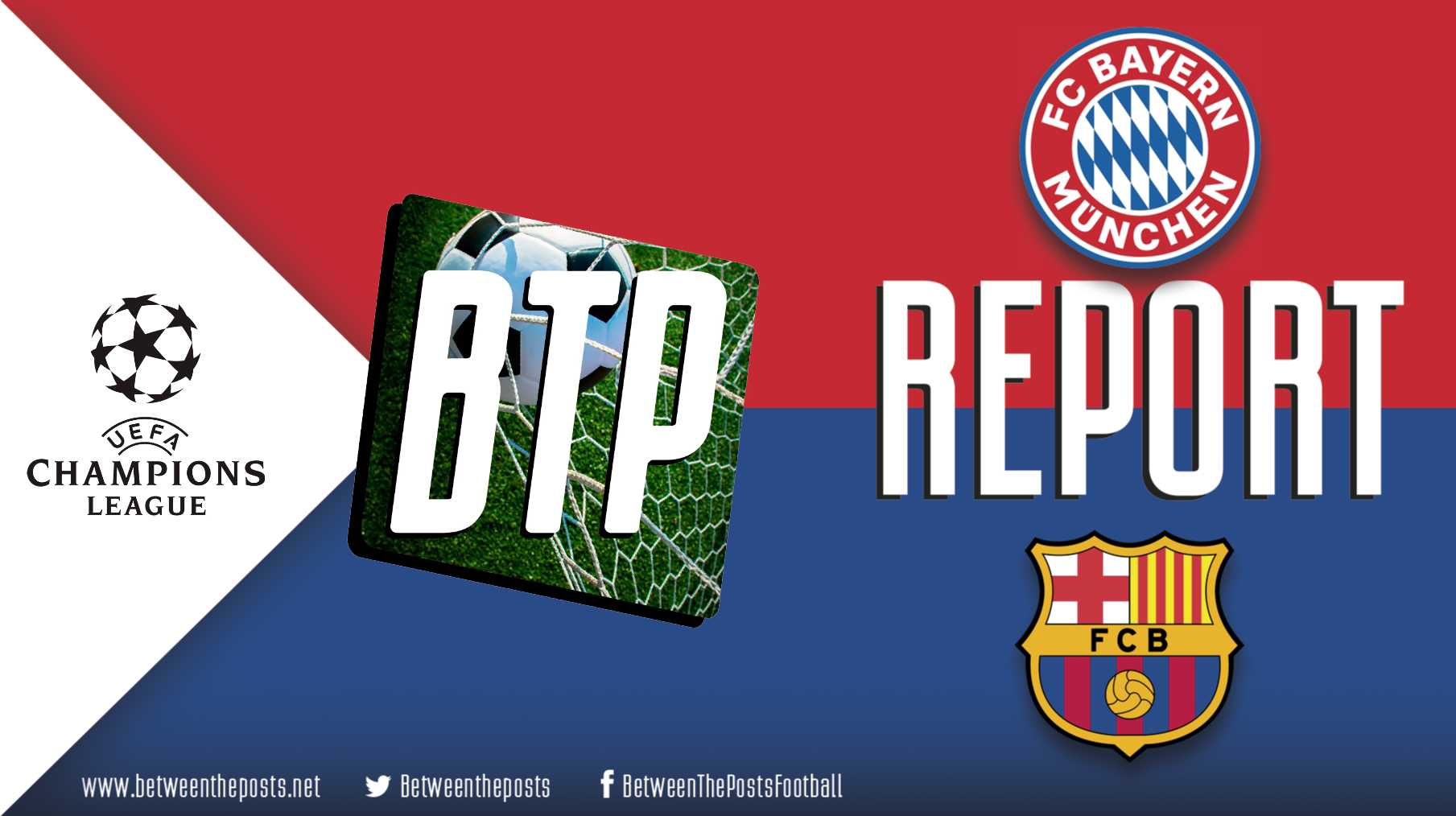