Portugal’s 4-3-3 system looked a bit more fluid with the ball than previously in the tournament, but still created almost nothing from open play. Meanwhile France’s reversion to a 4-2-3-1 system saw them, as ever, highly reliant on their individual talents to earn a point in this match.

Portugal put in a fairly average performance before scoring three late goals to dispatch Hungary in their first game, before being taught a footballing lesson by Germany in Munich. The big news in terms of personnel for Portugal was that Bruno Fernandes dropped to the bench after quiet performances in the first couple of matches.

Instead, João Moutinho joined Danilo Pereira and Renato Sanches in the midfield of a 4-3-3 formation. In defense, Nélson Semedo and Raphaël Guerreiro were the fullbacks either side of Pepe and Rúben Dias, while at the other end of the pitch there was a forward trio of Bernardo Silva, Cristiano Ronaldo and Diogo Jota.

France meanwhile earned a counter-attacking win over Germany in their first match, before dropping points to a determined Hungary side last time out. Having used a loose 4-3-3 formation in previous matches, Didier Deschamps reverted to his World Cup 2018 blueprint for this match.

This meant bringing back the 4-2-3-1 with a double pivot Two central midfielders next to each other. of N’Golo Kanté and Paul Pogba, with a central midfielder on one wing in the form of Corentin Tolisso this time around, and Kylian Mbappé on the other wing. There was also a change in defense, as Jules Koundé replaced Benjamin Pavard at right back alongside Raphaël Varane, Presnel Kimpembe and Lucas Hernandez. Finally, Antoine Griezmann played in the number ten role in support of Karim Benzema.

Both sides had about equal shares of the ball in the first half, as they were both relatively happy to sit off in a medium block A medium block refers to a team that retreats in their own half out of possession, generally only disrupting their opponents some way into their own half. defensive setup and challenge the opponent to break them down. In these phases, Portugal showed some slight improvements in comparison to their setup last time they had a substantial share of the ball against Hungary.

Much of this owed to the central midfielders in their 4-3-3 system, Moutinho and Sanches. Both had quite a bit of freedom in their positioning when Portugal had the ball, able to vary their position both vertically and horizontally depending on the spaces which opened up in France’s 4-4-2 defensive shape. 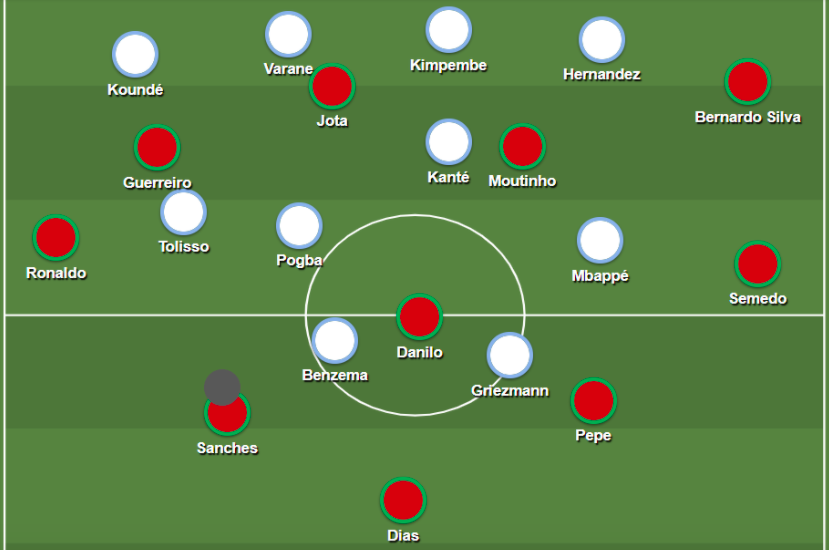 Portugal’s possession structures could be quite varied.

Sanches often started from deeper in the left halfspace, If you divide the field in five vertical lanes, the halfspaces are the lanes that are not on the wing and not in the center. Because there is no touchline like on the wing, players have the freedom to go everywhere. But this zone often is not as well-defended as the very center. This makes it a very valuable offensive zone to play in and a lot of chances are created by passes or dribbles from the halfspace. where he was proactive in trying to pick the ball up from the center-backs and drive his team forward with provocative dribbling and passing. Moutinho often moved himself between the lines drifting from the right halfspace into central areas.

This was especially the case when combined with Ronaldo’s dropping movements from the striker position, as he often dropped into the midfield to give an extra connection and create temporary overloads When one team has more players in a certain area or zone than the other team. for Portugal. In these cases, Moutinho would often oppose his movement, drifting between the lines into the space vacated by Ronaldo.

Portugal could therefore create decent connections centrally to keep the ball circulating, although were not always penetrative through this area. Their more dangerous attacks in terms of final third The one-third of the pitch that is closest to the opposition’s goal. action came through the right side, where the combination of Bernardo Silva cutting inside and Semedo overlapping gave them some crossing opportunities.

Still though, Portugal’s attack was still quite unproductive when it came to creating shots from open play in the first half. Their goal after half an hour was scored from the penalty spot by Ronaldo after a foul from Lloris on Danilo at an indirect freekick.

Portugal’s struggles to create shots from open play were mirrored by France, but with arguably even worse possession phases in deeper zones. The reliance on France’s superstars to create magic without much of a structure around them was apparent here.

The altered structure from Deschamps caused particular problems on the right side, where the presence of Koundé and Tolisso as right back and right midfielder respectively saw almost no ball progression through this side. This is not due to these players not having ability, but due to the roles not being compatible for their skill sets in an attacking sense.

Koundé is not a natural attacking right back, and Tolisso’s instinct was to drift inside into deeper positions around the right halfspace to help with ball circulation. This left France with basically no attacking presence on this side, as even though Koundé could hold the width, Portugual could be confident that he was not going to threaten them much when he had the ball in isolated situations. 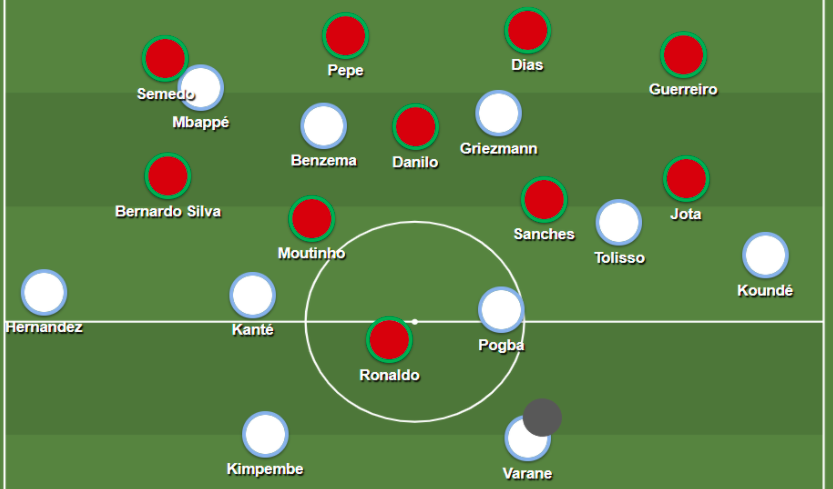 France’s attacking structure was quite limited, especially on the right.

In the end, France’s attack basically had two avenues. The first was for Griezmann, Mbappé and Benzema to overload an area of the pitch and look to combine amongst themselves with speed to create breakthroughs. This was often afforded by Griezmann dropping deeper to pick up the ball and play quick forward passes into feet.

The second main avenue relied on Pogba’s almost superhuman through balls on the night, where he was able to pick out Mbappé on a few occasions making dangerous runs in behind. France’s eventual goal just before half time also came from the penalty spot though, as Benzema converted to level the scores. 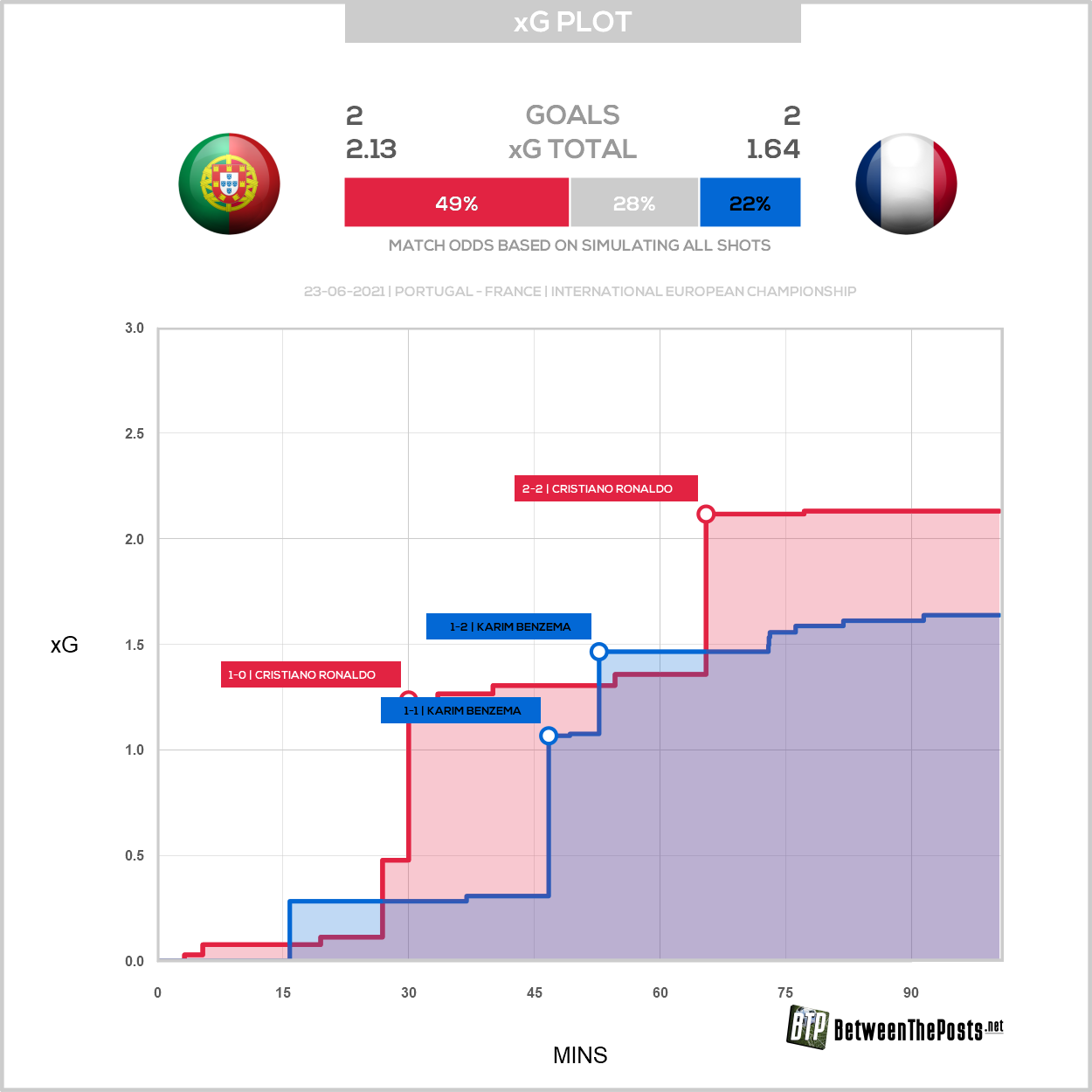 Draw is enough for both sides

Benzema got his second goal just after half-time, assisted by another wonderful Pogba throughball, making it 2-1 to France. The downside for Deschamps in this period was that his half-time substitute Lucas Digne who had replaced Hernandez at left back was forced to come off through injury after seven minutes, meaning that Adrien Rabiot had to deputise at left back for the remainder of the game.

Portugal had also made a change of their own at half-time, bringing on João Palhinha for Danilo, likely due to the head injury sustained by Danilo in the first half. They were not behind in the scoreline for too long either, as Ronaldo scored another penalty on the hour mark after Koundé’s handball.

The next move for Deschamps was an attacking one, as Kingsley Coman replaced Tolisso on the right side to give a more direct attacking threat. Going into the last twenty minutes, Portugal were starting to sink a bit deeper and more passive, defending in their 4-1-4-1 formation in the knowledge that they needed to avoid defeat in order to go through.

Perhaps as a response to their troubles in wide areas against Germany, the Portugal wide midfielders in this match tracked their opposing fullbacks as deep as was necessary, meaning that Portugal could sometimes appear as a back five, especially with the dropping of the right midfielder as Rabiot pushed up with quite aggressive positioning.

Portugal made three changes between the seventieth and eightieth minutes, as Bruno Fernandes, Rúben Neves and Diogo Dalot replaced Bernardo Silva, Moutinho and Semedo respectively. Coman’s earlier introduction for France did seem to add a bit more vibrancy to the attack, as the option of attacking more down the right side made them slightly less predictable than before.

There were more changes as the game drew towards its conclusion, with Sérgio Oliveira replacing the impressive Sanches in midfield, while Moussa Sissoko replaced Griezmann. This saw a reshuffled France for the last few minutes, with Sissoko slotting in on the right of midfield, Coman moving over to the left, and Benzema playing as the number ten behind Mbappé.

Penalties have a huge influence on football matches.

Portugal’s possession play was somewhat improved from previous matches, but still did not allow them to create from open play. Against the ball they were fairly passive, especially as the game went on. Overall, there is still plenty of room for improvement for this team.

France’s change of system severely blunted their attacking threat down the right, but they still managed to produce some dangerous moments in attack thanks to Pogba’s exquisite passing and the movement of Griezmann, Mbappé and Benzema. 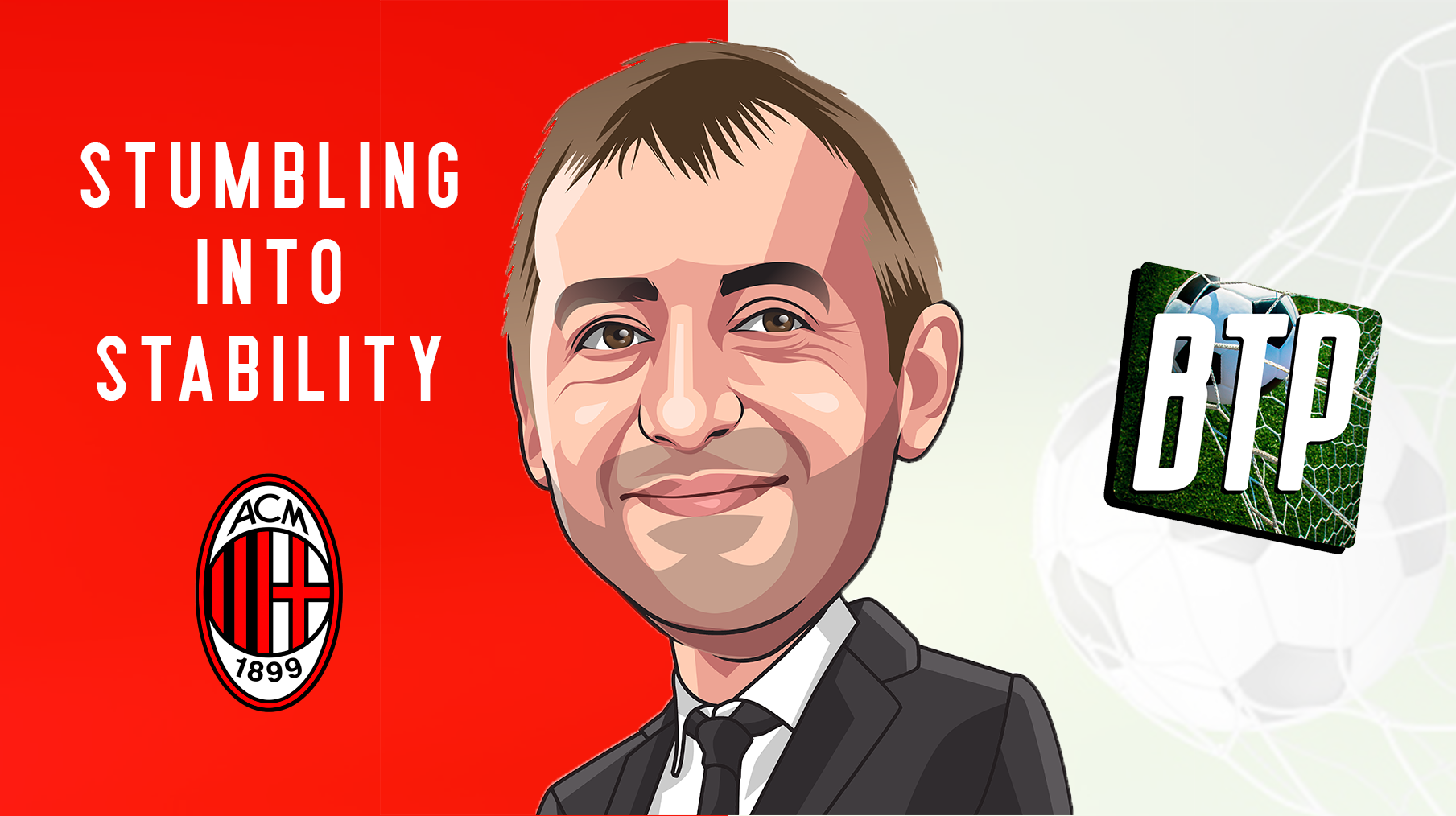