Overload and draw Portugal to the right, switch the play to Robin Gosens, goal. As simple as it sounds, this was the sequence of the game. It was repeated countless times, and it allowed Germany to secure the win over Fernando Santos’ side. With the Portuguese manager failing to adjust, Gosens ran Nelson Semedo ragged. As a result, Germany are finally able to breath, and for Portugal the upcoming match against world champions France has suddenly turned into a crunch tie.

The nature of Germany’s group meant that the level of competition was always going to be high. And the opening day loss to France did not do much in lifting the pessimistic mood that had formed around the national team. Joachim Löw’s decisions have been picked apart by coaches and fans, with even the choice of formation causing considerable consternation among followers of the team.

Still, the manager stuck with the shape and the personnel, trusting that the team would click and come good with more reps. This looked to be a risky gambit against a Portugal side whose victory over Hungary belied the effort needed to secure the win, but whose front four had the potential to torpedo the German ambitions.

Aside from the high-profile names involved, this encounter had an interesting backdrop: rather than targeting each other’s weaknesses, both sides would play to their respective strengths. As has become common under Fernando Santos, Portugal would look to sit in a defensive block and strike on the counter, whereas Germany would aim to control possession and use it to generate opportunities in the box. In this scenario, how would the sides organize themselves? What is the X-factor that would allow one to trump the other?

Portugal score but expose their weaknesses

It is somewhat surprising that a team loaded with as much creative talent as Portugal does not seek to maximise it, but such is the nature of international football.

In any case, their opener demonstrates precisely why Santos prefers this approach, as a German corner kick turned into a goal for Ronaldo in the blink of an eye. Transition defending is not a strong suit for this German side, and they were sliced open on the break in a sequence where Havertz was one of the defenders trying desperately to track back. Having taken the lead, Portugal continued to sit back, though cracks began to appear in the defensive makeup of the side.

While defense would quickly prove to be a problem, Portugal’s first half play in possession was unremarkable – buildup consisted of the fullbacks slowly moving forward, with Danilo Pereira moving to the side of the center-backs to compensate. Ronaldo would drift from his position to come deep, with Diogo Jota moving inside to provide a presence should it be needed. In these phases, their play was largely unscripted, relying on the interactions between the four attackers. It must be noted that they did not find much joy through these sequences, though these positive spells were few and far apart due to the amount of possession enjoyed by Germany. 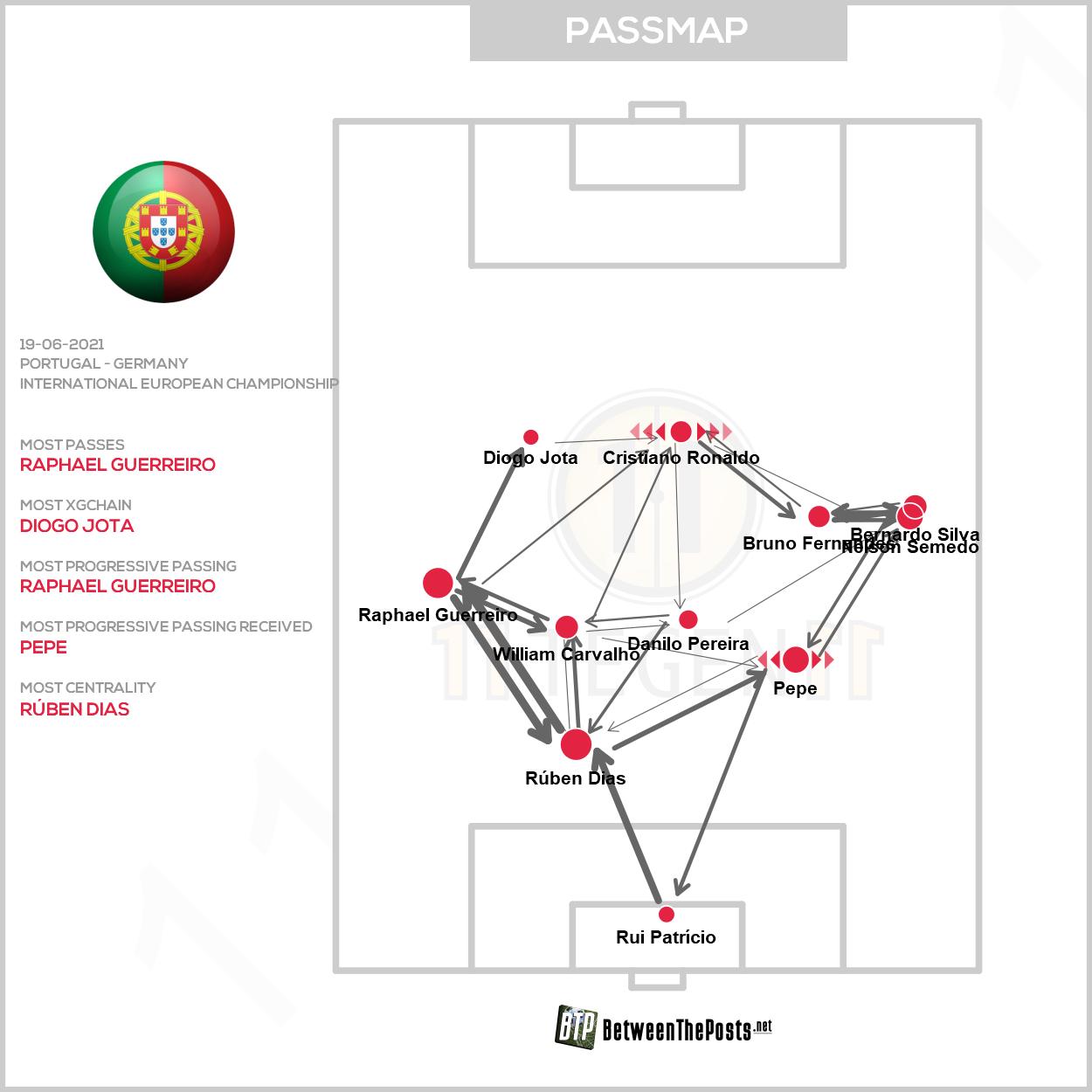 The keys to Germany’s approach

As was made clear by the opening twenty-five minutes, Germany sought to use the height and width of their shape in unlocking the Portuguese block. When out of possession, Cristiano Ronaldo was alone up top for Portugal, who sat in a 4-1-4-1 block. This allowed the defensive chain to easily bypass the striker, much of the action taking place just beyond the halfway line. Here, Matthias Ginter would move almost to the touchline, with Joshua Kimmich higher up in the same lane.

This created a scenario with two wide players, who along with a third – Kai Havertz or Thomas Müller – could create a passing triangle. Similarly, Robin Gosens stayed wide on the left, with Havertz occasionally moving outside to assist in the creation of overloads When one team has more players in a certain area or zone than the other team. on the wing. The double width drew the Portuguese block to the flanks, spreading them thin in midfield where the strikers and midfielders could alternate positions. 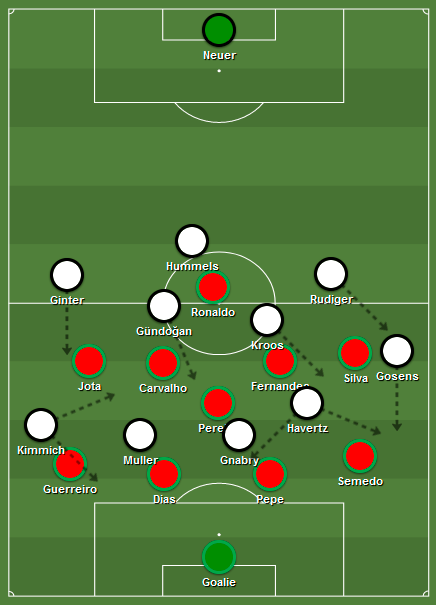 Germany’s attacking setup. Gosens would become increasingly important down the left, with Germany creating asymmetric structures to allow the wing-back to constantly make his diagonal runs.

With fewer Portuguese players in the middle, Germany could use one-touch passing to move around defenders and burst into the box, forcing chaotic interventions from the opposition. All of this often started from a situation when the forwards were in narrow positions, where they – or the wingbacks – could be accessed either as described above or through lofted passes from the likes of Kroos and Kimmich.

The naturally advanced position of the wingbacks created an effective front five, with Gosens in particular staying wide and almost always on the outside of Nelson Semedo. In a smart move, cross-field switches from wingback to wingback were also utilized, and Gosens almost opened the scoring from one such opportunity. While the strike was ruled out for a handball, it illustrated a key aspect of Germany’s offense, and their opener came via a similar move with Havertz finishing off the pass from the Atalanta wingback.

As the match wore on, Gosens began occupying an increasingly prominent role, with Germany executing diagonal switches to find the wingback in and around the box. It is not that he was key to Germany’s chance creation; rather, Germany aimed to take advantage of Portugal’s difficulties in tracking his runs and the chaos he produced.

With the Portuguese block drawn to the ball, it was easy to attract them to the right before switching to the left, which was also possible through passes into the halfspace If you divide the field in five vertical lanes, the halfspaces are the lanes that are not on the wing and not in the center. Because there is no touchline like on the wing, players have the freedom to go everywhere. But this zone often is not as well-defended as the very center. This makes it a very valuable offensive zone to play in and a lot of chances are created by passes or dribbles from the halfspace. by Kroos and Antonio Rüdiger. This allowed the wingback to arrive on the ball with space to drive into, creating a lot of problems for Semedo and Pepe. 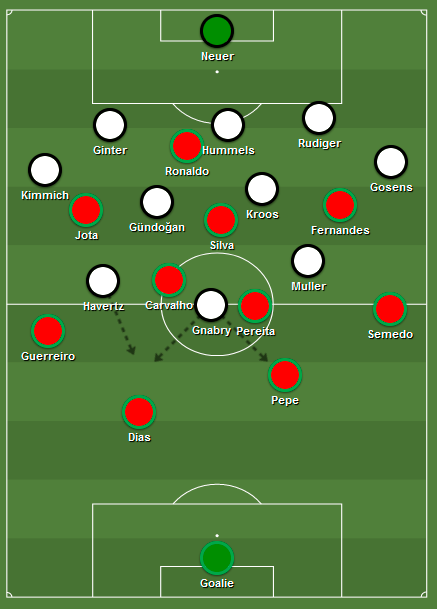 Portugal in the second half.

Following half-time, Santos subbed out Bernardo Silva in favour of Renato Sanches and moved to a 4-2-3-1 shape with Jota and Fernandes flanking Sanches in the attacking midfield role. The intent was to push up more aggressively, with Sanches being counted on to provide the same dynamism and thrust that had been on display against Hungary.

While the approach worked in the initial moments, the dangers of an aggressive approach had already been witnessed towards the end of the first half, where Gnabry nearly scored on the break. The threat of the counter was another tool with which Germany could attack, since they did not deviate much from their plan.

Interestingly, there were sequences where Havertz or Müller moved out to the wing and enabled him to play more centrally; however, these did not seem planned though they added a wrinkle to Portugal’s coverage of the flank. The main idea was to continue exploiting the runs from Gosens, which produced the assist for Havertz’s second as well as a strike for the flying wingback himself.

While Jota would strike to pull Portugal within two goals, the game state was established and clearly favoured Germany. The repeated raids down the left from Gosens had already wreaked havoc and were enough to keep the Germans on top. By the time of Jota’s strike, Marcel Halstenberg had replaced Gosens, and Germany were able to see out a much-needed – and comfortable – victory. 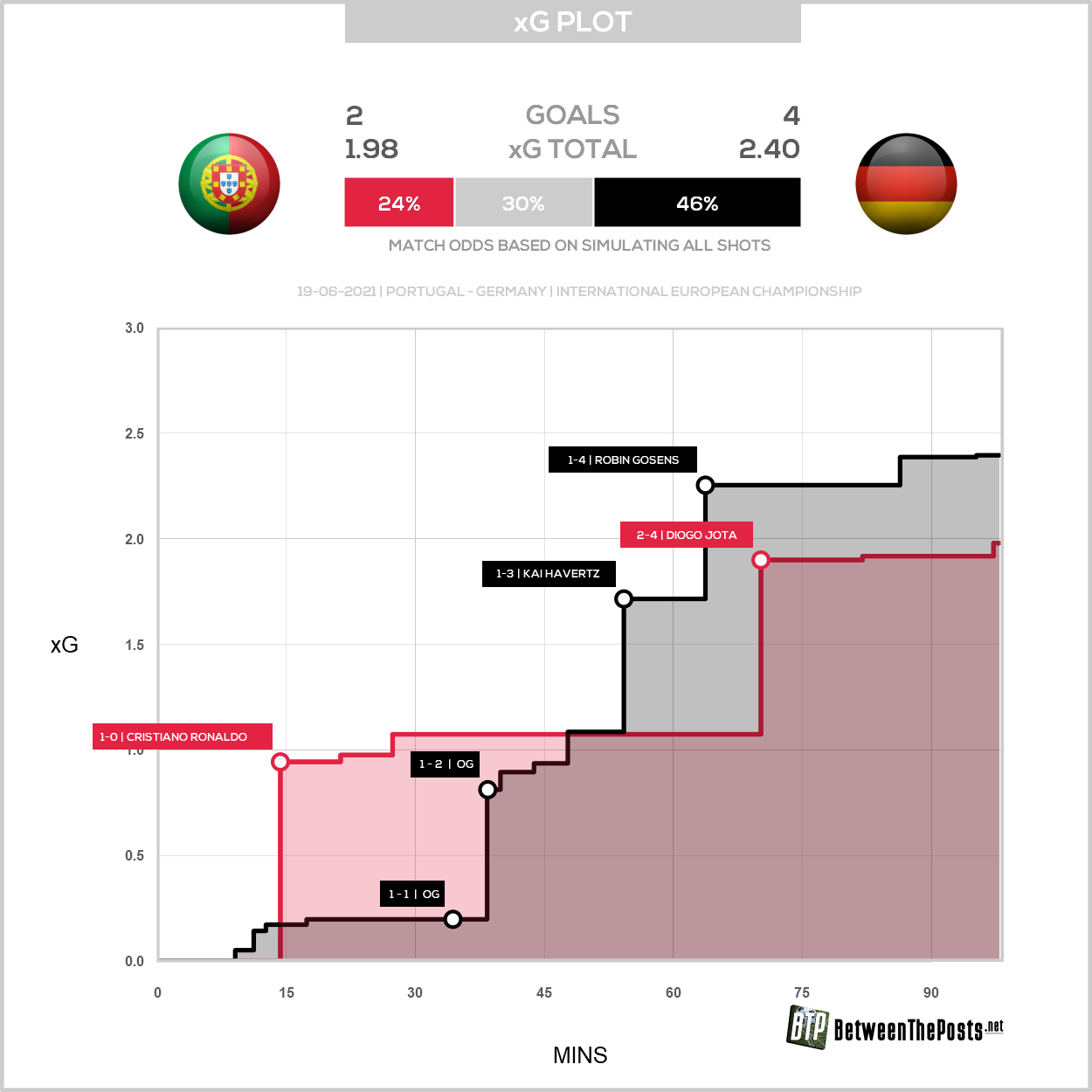 The win sees Germany take second position in the Group of Death, with France’s draw against Hungary leaving them vulnerable in first place. A victory over the Hungarians and another unfavourable result for France would allow them to vault into first place, and more importantly, release some of the pressure that has built on Löw. This was a fine victory for the manager against a side that bizarrely failed to adjust – the Hungarians, while weakest on paper, might not be as forgiving when the two nations face each other. 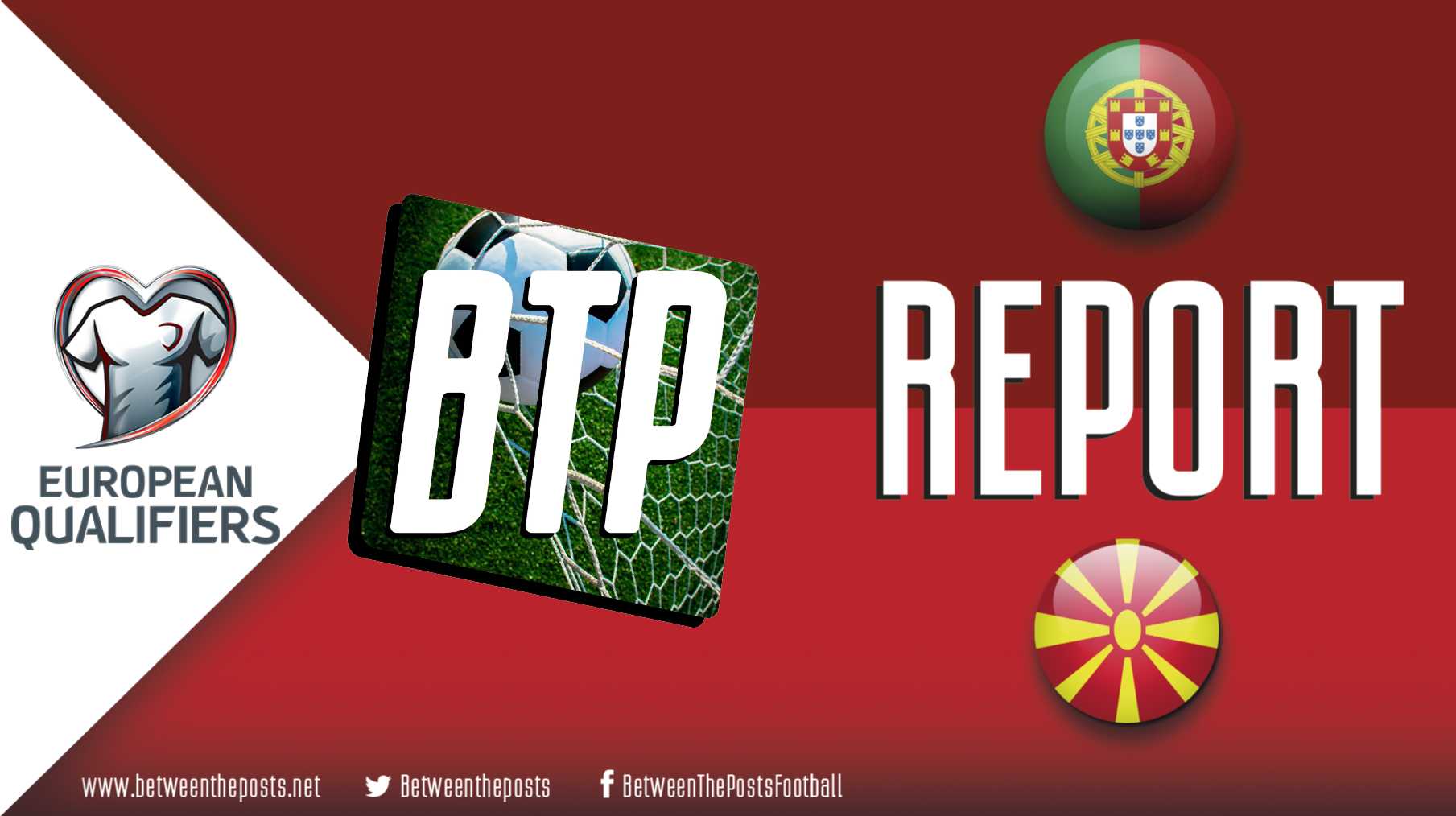