Real Madrid struggled to break down one of the worst defenses in the league before Benzema took over and led a brief renaissance. Half-time killed the momentum, allowing Rayo to grow back into the game and force Courtois to save the result at the death.

Now that the new manager euphoria has well and truly worn off, Real Madrid do not look good. They were destroyed by Eibar, managed an unconvincing win versus Roma, lucked out against Huesca, and suffered their worst home defeat in Champions League history midweek against CSKA Moscow. The only positive performances following Santiago Solari’s first two weeks have come against Valencia and Melilla – the latter meaning little, since Melilla is a third division side.

In general, Solari has struggled massively to implement his vision. He prefers rigidity when in possession and likes to position his wingers high and wide. The location of his wide men theoretically helps to facilitate fast passing movements down the flanks, while the rigidity helps protect against the counterattack. But it also makes Madrid vulnerable to pressing, as it is easy to pressure a team that has a highly structured shape and possesses a disconnect between their wingers and the rest of the team.

We saw this against Eibar and Huesca, possibly prompting Solari into a change versus CSKA Moscow, where Isco and Marco Asensio replaced Bale and Lucas Vázquez to play in an inverted fashion. Unfortunately, they were limited by a severe lack of collective mechanisms, and the increased fluidity made Madrid weaker when defending transitions.

Solari chose to revert back to his usual strategy against nineteenth placed Rayo Vallecano. With Bale injured, Asensio started on the left, opposite Lucas Vázquez, who returned to his place on the right-wing.

Rayo Vallecano, who possess the third worst defense in the league, lined up in a 4-3-3 / 4-1-4-1 formation, hoping to snatch a point against the struggling Madrid. They had to do so without key striker Raúl de Tomás, who was contractually barred from playing against his parent club. Adri Embarba replaced him ahead of a very different team than the one that lost 2-0 against Real Betis. Luis Advíncula moved up from right back into an attacking position and Álvaro García and Álvaro Medrán replaced José Pozo and Óscar Trejo in midfield.

If there is one thing Solari has done well, it is the successful continuation of the high press following Lopetegui’s departure. Though Madrid do not apply it as consistently as before, they do so with effectiveness when Solari decides it is appropriate. The game against Rayo Vallecano was no exception. 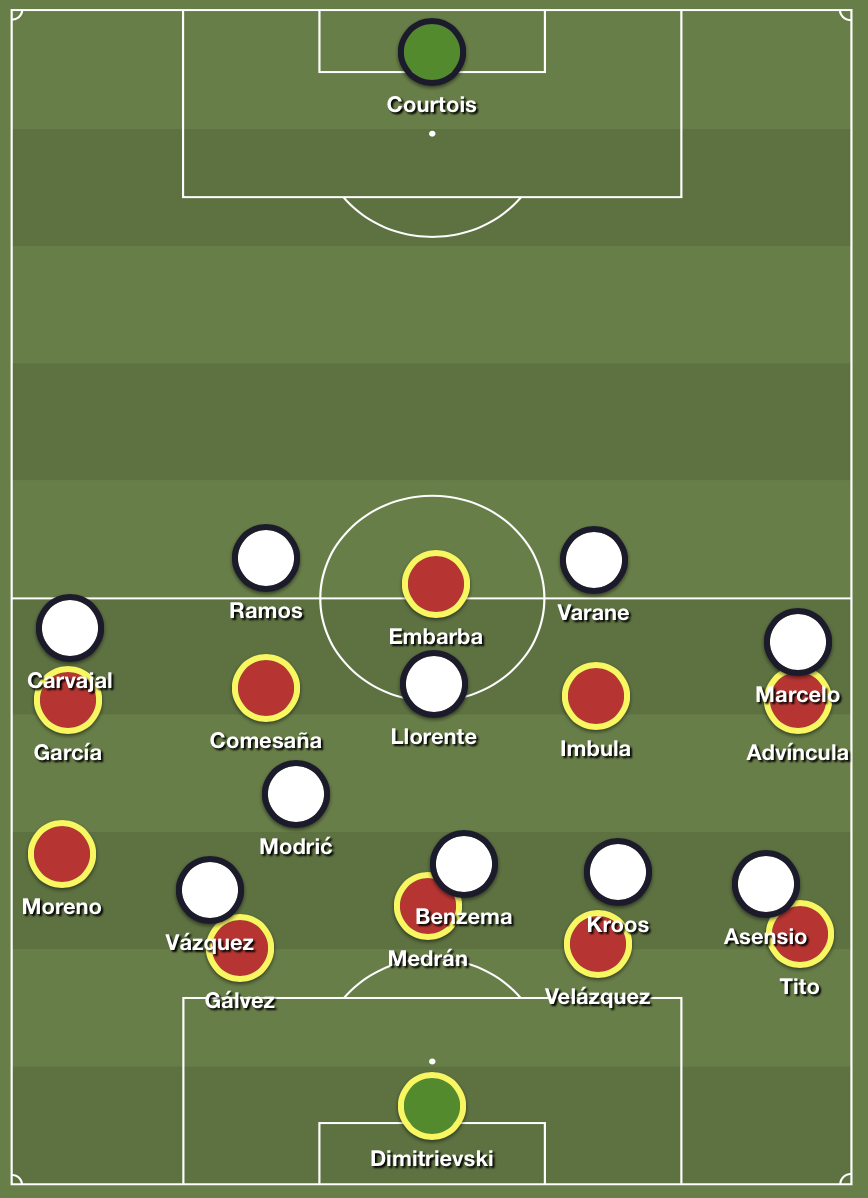 In the rare moments the opposition had the ball, Modrić or Kroos would step up aggressively to press one of the center backs, prompting Benzema to shut down Álvaro Medrán, the defensive midfielder. This locked play onto the flank, which would be further secured when the relevant wingers and fullbacks closed down their counterparts. The far-side winger The far side is the side of the pitch where the ball is not. or the far-side central midfielder would then step up to close down the far-side center back. This may have been a tad unnecessary, given that Benzema would have already been blocking off the passing lane back to either Alejandro Gálvez or Emiliano Velázquez, but it worked nonetheless.

Only on a few occasions did Vallecano manage to escape by switching play, but Madrid’s back-line was more than equal to the challenge that came with defending Embarba and one of García and Advíncula.

As mentioned before, Rayo are not a good defensive team, which was evident in the way they played at the Bernabéu. Their attempts to sit in an organized and compact 4-1-4-1 medium block A medium block refers to a team that retreats in their own half out of possession, generally only disrupting their opponents some way into their own half. was consistently ruined by the movements of central midfielders Giannelli Imbula and Santiago Comesaña.

They seemed to be confused as to whether they had to stay in position to block off passing lanes or track the deep movements of Luka Modrić and Toni Kroos. This created hesitations that theoretically provided Madrid’s midfielders with enough time to exploit the spaces Imbula and Comesaña left behind. 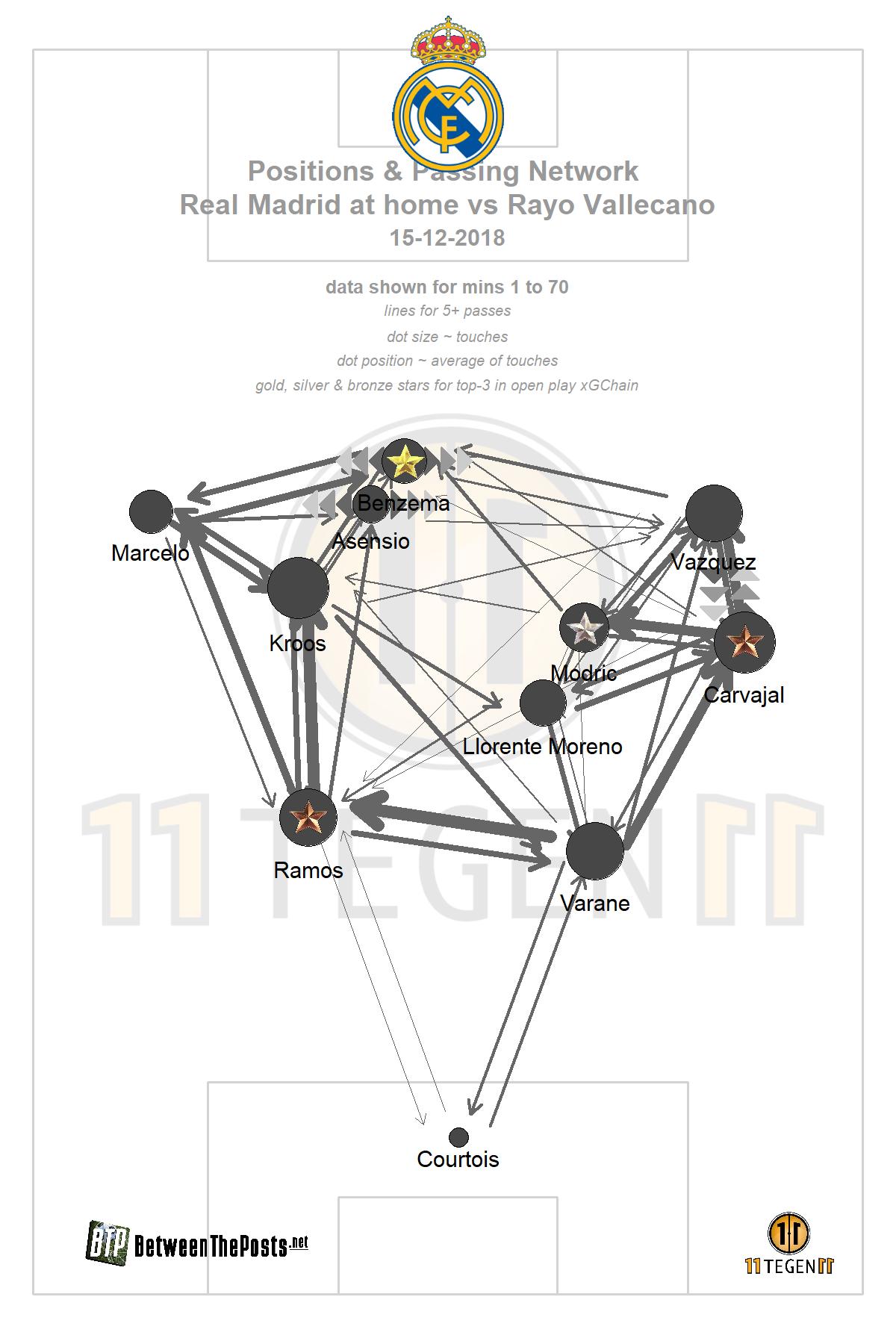 However, Madrid were rarely able to accomplish this in the opening 10 minutes. Marco Asensio and Lucas Vázquez were consistently positioned on the shoulder of the defense, meaning there was no one to drop deep and help progress play between the lines. Thus, Real Madrid often rotated play to the flank, where Imbula or Comesaña would attempt to trap play on the wing.

The disconnect created by the positioning of the wingers affected Marcelo more than anyone, as Madrid mainly chose to build down their left. Consequently, the Brazilian fullback completed only 77% of his passes thanks to his futile attempts to loft passes to Asensio down the line.

Eventually, Benzema decided enough was enough and took over. He drifted over to help Marcelo and provide an option to escape Vallecano’s trap. Once on the ball, he facilitated quick one-two passing combos and switches to the far-side. 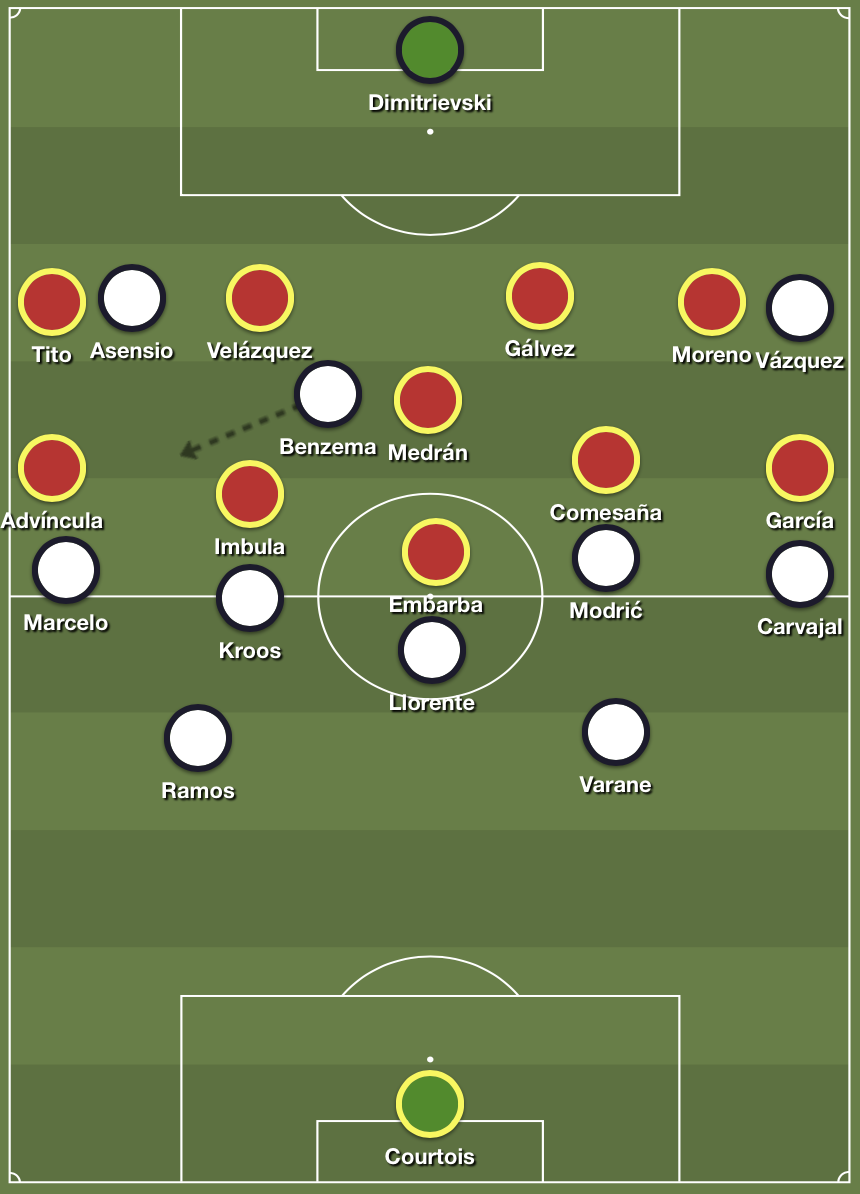 Madrid soon reaped the benefits. After a rare and ill-fated attempt to press high from the away side, Benzema got on the ball, played a long pass into Vázquez, and made a blind-side run behind Vallecano’s scrambling defense. He received the ball just in time and clinically converted his team’s first shot of the game.

Real Madrid play a little better before returning to square one

The goal elevated Madrid’s confidence and level of play for the next twenty to twenty-five minutes. The pace of play improved, Marcos Llorente began to take control and play one-twos with Modrić and Kroos, and some chances started to arrive. However, Madrid failed to create anything like Benzema’s chance again – except for an Asensio one-versus-one situation that came in transition minutes after going 1-0 up.

It was back to square one after half-time, as the momentum from Benzema’s strike dissipated and Madrid once again had to turn to the collective to fashion chances. Unsurprisingly, they managed a pitiful three shots to Rayo Vallecano’s nine in the second half. Four of the away team’s shots arrived in quick succession at the very end of the game, forcing Courtois into two clutch saves to rescue the three points.

There can be no dancing around the obvious now – Real Madrid have serious problems.

Their underlying numbers have fallen off a cliff under Solari thanks to a new inability to get past defensive structures; whether that be a press, a medium block, or a team parking the bus. Many fans would like to blame the players’ underperformance as the main for reason for this, and while no individual has been great this season, it has been the players that have made Madrid look half decent over the last two games.

Vinicíus Junior posed a single-handed threat versus CSKA Moscow and Benzema put the team on his back against Rayo Vallecano. At some point Madridistas must ask why every player seems to be underperforming at the same time, despite rotations and attempts to inject youth into the lineup.

Vallecano fans don’t have many reasons to feel better than their opponents. Though they nearly stole a point, their vulnerabilities in defense remain and they are probably aware that a better side would have caused more problems for them. If they do not find a way to tighten things up at the back soon, they might find themselves back in the Segunda División come May.