Italy edged past their visitors the last time the two outfits met but were not so fortunate this time around. Thanks to a twist on an old ploy and an aggressive high press, Spain proved that there are chinks in Italy’s armor after all.

In a game synonymous with cycles, football has proven that staying at the top is a trickier task than getting there in the first place. As two of Europe’s best teams prepared to lock horns, the continent’s leading outfit would have to prove its worth against the side closest to knocking them off their perch.

Italy built their way up from the ashes to take the rest of the continent by storm in the summer. From the ignominy of missing out on the 2018 World Cup, they reached the summit at EURO 2021, edging past England in a penalty shootout to decide the final. Yet, an even more grueling test against Spain in the last four forced the Azzurri to fall back on old ways, suffering their way to victory. So in a contest between dominant footballing nations, who would book a place in the final of the Nations League?

Roberto Mancini set up the home team in a 4-3-3 system. He then made two changes to the side that took to the field against Spain in the semi-final of the EUROs. At the back, Alessandro Bastoni played to the left of Leonardo Bonucci, whose usual partner Giorgio Chiellini dropped to the bench. The other tweak was in the attack, where striker Ciro Immobile made way for Federico Bernardeschi.

Spanish manager Luis Enrique went for his typical 4-3-3 shape. There would be no start for Dani Olmo, who had played a pivotal role in the clash during the summer, leaving Pablo Sarabia to claim the final spot in the front three from the right. Elsewhere, 17-year-old Gavi earned his debut for Spain in the midfield, while Marcos Alonso slotted in on the left of the back four.

Italy’s struggles to break the press

A primary task for Mancini’s men would be gaining control of the ball over the Spaniards. Enrique’s men pressed from a 4-3-3 setup. Here, Mikel Oyarzabal took a position deeper on the left flank than Sarabia, who stood more centrally near Bastoni. The asymmetric lineup of the wide men then forced César Azpilicueta to push up higher from the back four to access the room behind the right winger.

In the middle of the pitch, Spain went man for man. As was the case in the EUROs, Sergio Busquets shifted from a more central position to mark Nicolò Barella. However, Koke did not have the task of monitoring Marco Verratti. Instead, he moved forward to shut down Jorginho. Hence, Gavi ended up tracking Verratti. 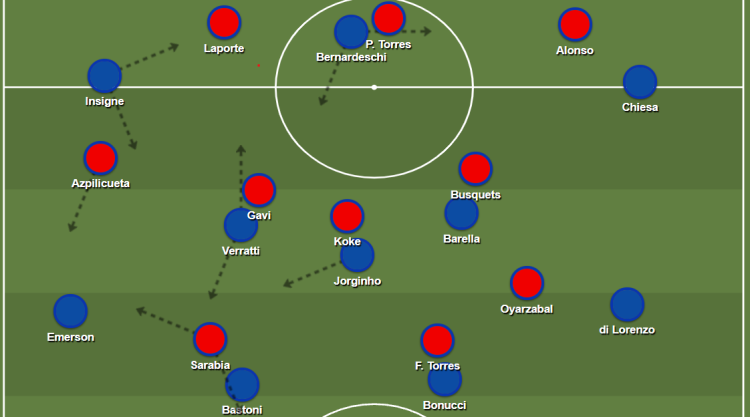 Watching his men struggle to get going on the ball in the summer, Mancini seemed to have given his players new ideas to break the high press. Bernardeschi was more involved in the buildup than Immobile, while Lorenzo Insigne, roamed into the halfspace from the left flank. Meanwhile, from his reserved spot in the left halfspace, Verratti did not only drift laterally, but also would make more explosive and vertical movements off the back of Gavi.

These positional switches stretched the back four of Enrique’s men. Marking from the midfielders forced Pau Torres and Aymeric Laporte to move far from forward from the halfway line, taking on even more risk given the height of their side’s offside trap. But while the Italians targeted many deep runs in behind from the back, their mechanisms hardly bore any fruit. Nor did the tweak around twenty minutes in that saw Insigne move centrally and Bernardeschi out to the right make much of an impact.

On the other hand, the Spanish lived up to their reputation as the masters of ball possession. Italy initially tried to press high up the pitch but soon conceded ground to their visitors. Here, typical mechanisms from the time Enrique has been in charge of his country came to the fore. 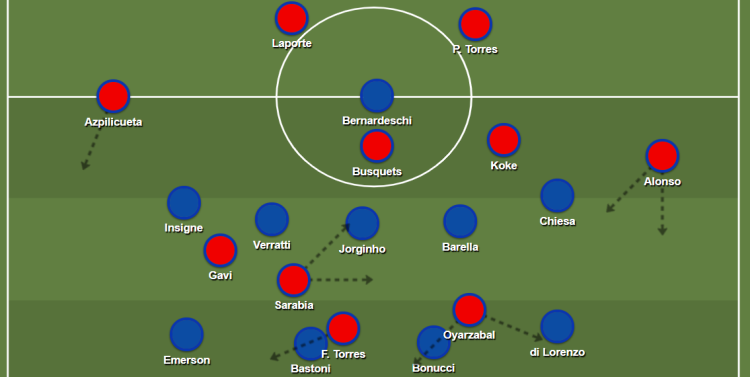 Spain’s offensive shape with Koke deep on the left, Sarabia roaming centrally and Gavi on the right.

From the left, the central midfielder would often drop deep in the halfspace to fill the room next to Pau Torres. Alonso gained the license to move higher up the flank while Oyarzabal shifted into a more inverted position. At the start of the game, Gavi operated in this zone, but the debutant soon drifted higher between the lines from the right halfspace, leaving Koke to get his foot on the ball.

Ahead of them, the front three’s positions were a crucial element in posing Italy problems. Olmo’s threat in the summer emerged from his utility as a false nine. Ferran Torres stayed higher on the last line, but Sarabia roamed from the right to more central pockets, mimicking the role of his compatriot. Sharp lateral movements let the forward pick up the ball in the gaps to either side of Jorginho. From here, the forwards pinned Bonucci centrally, opening up space for underlapping runs on the inside of Giovanni di Lorenzo to breach the final third.

A mountain to climb

Spain’s astute plan broke the deadlock a little over fifteen minutes after kickoff. Pau Torres split the lines to find Oyarzabal, who found Alonso before moving to the left flank. The forward carried the ball down the line, then whipped a delivery into Ferran Torres, whose sweetly struck volley flew beyond Gianluigi Donnarumma.

#ITAESP
Alonso had an important role in Spain's chance creation in the 1st half acting as an outlet, facilitated by Koke dropping deeper & a flexible, narrow front 3 making underlapping runs.

The game was not cut and dry from here. Bernardeschi made forays to the box from the right wing while Insigne spurned a glorious chance to draw the two teams level. And he would rue the mistake all the more near the end of the first half. In the 41st minute, the ball took a deflection off of Ferran Torres and spun into the air. Bonucci then had an aerial clash with Busquets, who took a blow to his neck. The referee adjudged the defender to have led with his elbow, brandishing a second yellow card.

To make matters even worse for the Italians, a familiar source of danger would put them even further behind on the stroke of half time. Alonso clipped the play from deep on the left into Sarabia, who then laid off a pass into the path of Oyarzabal. The left winger then stood the ball up to the far post, where Torres guided the ball with a headed effort past Donnarumma and into the back of the net. Down a man and two goals, Italy had a mountain to climb to reach the Nations League final.

Chiesa’s clutch contribution is not enough

Mancini reacted to Bonucci’s dismissal with a change of setup. His men now played in a 5-3-1 block, where Federico Chiesa played as a right wing-back. Enrique was not short on tweaks either, bringing off Ferran Torres for Yeremi Pino. He had also made a structural adjustment, lining up Azpilicueta on the right of a clear back three. Koke stayed deep in the left halfspace behind Alonso while Pino held the width on the right to the outside of Sarabia.

Mancini made more alterations as the half went on, changing all three midfielders and introducing Moise Kean in place of Insigne. But Spain’s dominance over the ball and the territory persisted. Chiesa’s usual vigor seemed the only antidote to Italy finding a way out of this tricky situation, and he fittingly offered a spark in the 83rd minute.

Pino looked to steer a header back to Pau Torres from a cleared corner to the center circle. But Chiesa pinched the ball, then knocked it past the central defender to bear down on the goal. Facing Unai Simón one on one, he selflessly squared the play to Lorenzo Pellegrini, who tapped home into an empty net. But it was a case of too little, too late as Spain held on to seal a momentous victory.

Spain could count themselves unlucky to have lost this clash back in July, so they will revel in the reality of reaching a final this time around. Either France or Belgium await them, and it will not be a shock to see Spain end the year with a trophy should the details go their way in the final third.

Italy will rue their missed chances, which saw their 37 game unbeaten run come to an end. Yet, elements of their display were a reminder of how the team still has areas to improve, having shot to prominence against the odds, and Mancini will back himself to improve the team as the World Cup gets ever closer. 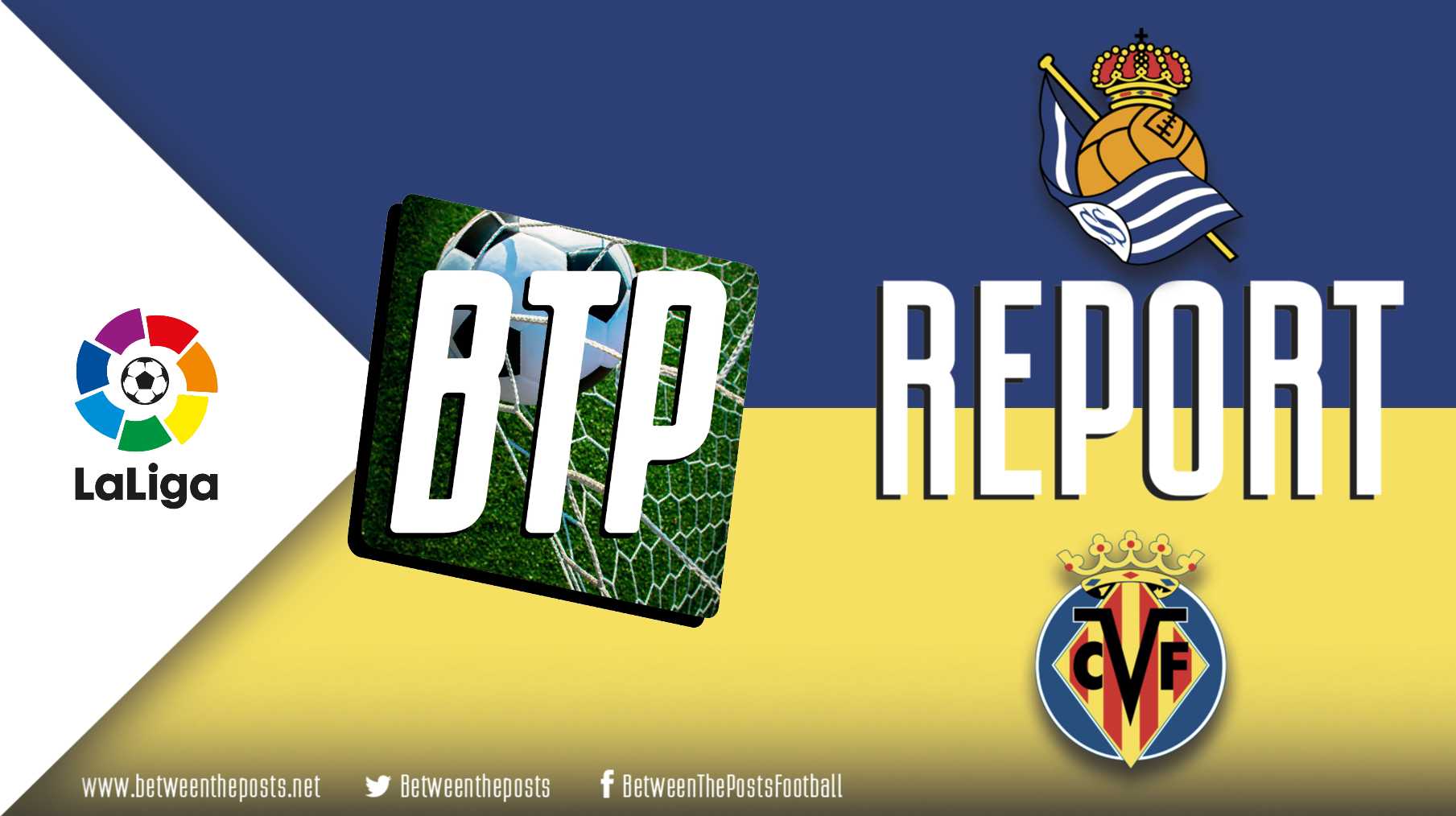 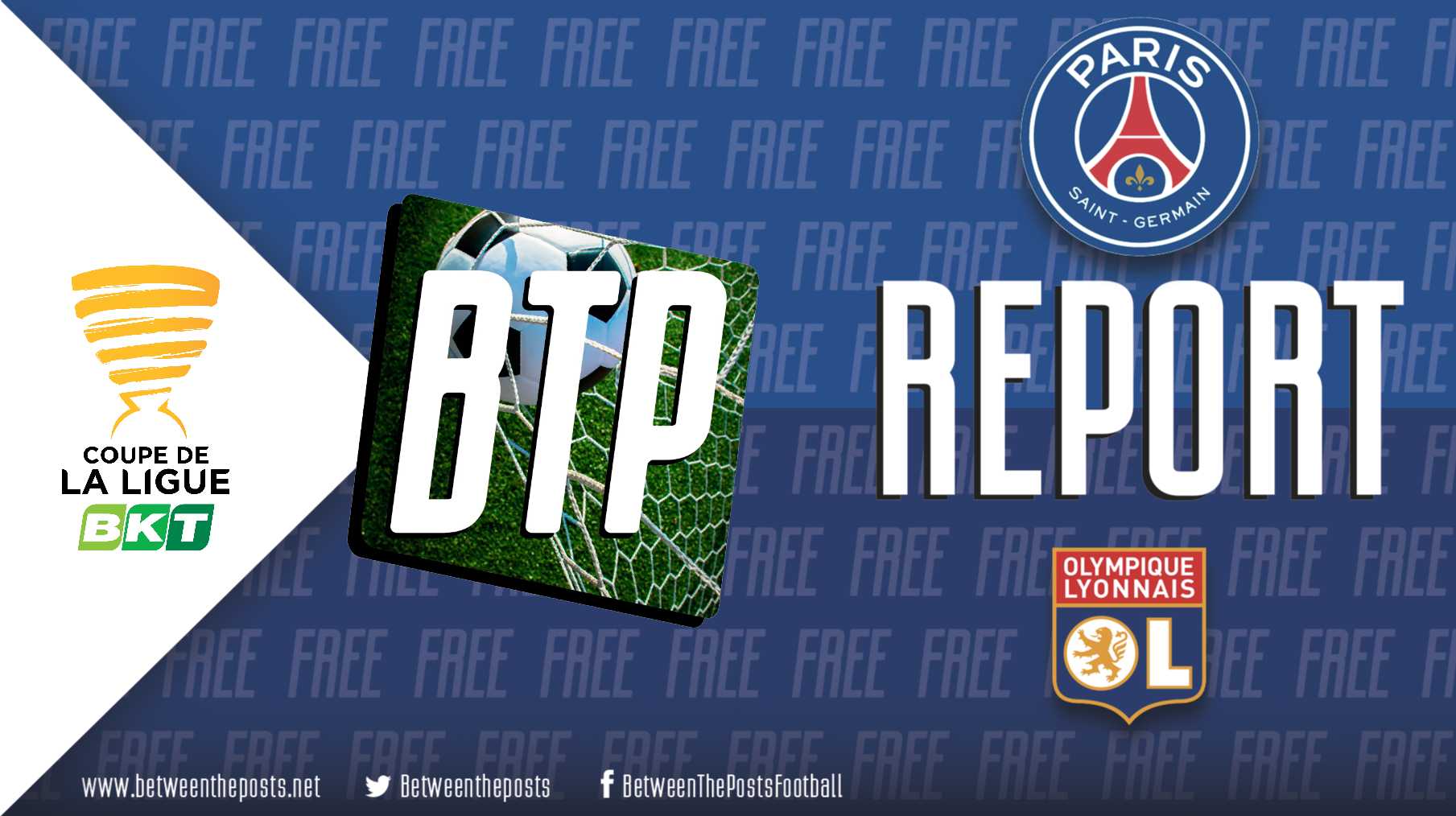