In a season where Leicester City’s quest to usurp the top four has fallen flat, fixtures against Liverpool have gone to plan. So, at the third time of asking, Brendan Rodgers hoped to seal a victory against his old employers on their home turf. But the home team were too wily for the Foxes, turning to a trusted figure, primed to futureproof their frontline, to settle the scoreline.

In most eras, sporting a 14-6-2 record at this stage of the season puts you in an ideal spot to duke it out for the top spot. But the Premier League is Pep’s world and, Liverpool, for all their brilliance, are just living in it. Twelve points off the summit before kickoff, their hopes of a second league title are slim. But two games in hand on the league leaders affords them the chance to cut the gap to six. If this miracle were to happen, they could not drop points, not least to a side well short of their standards.

In an era when they have gone from strength to strength, Leicester City have taken a backward step. From knocking on the doorstep to the top four, they have regressed into a run of the mill outfit that lies twelfth in the league table. The Brendan Rodgers cycle, familiar to followers of the home team, is taking an ugly turn, nearly rendering this fixture a write-off. The one point of solace: a 1-0 win over Liverpool to end 2021 amid similarly contrasting runs of form. So could lightning strike twice?

Liverpool manager Jürgen Klopp’s lineup was largely predictable. Joël Matip came in for Ibrahima Konaté at the back to partner Virgil van Dijk, while Curtis Jones kept his place on the left of the three in midfield, forcing Thiago Alcantâra to operate from the right. Upfront, Sadio Mané was yet to return to the squad off the back of winning AFCON for Senegal, while Mohamed Salah, having lost the final with Egypt, was only a substitute. So, left winger Luis Díaz made his league debut in front of the Kop.

Entering this game off the back of a 4-1 defeat away to Nottingham Forest in the FA Cup, Rodgers rang the changes. Wilfred Ndidi dropped into the heart of the back four, stepping in for Çağlar Söyüncü. Boubakary Soumaré and Kiernan Dewsbury-Hall then made up the double pivot behind James Maddison. Further afield, Marc Albrighton featured as the right winger, forcing Ademola Lookman to the left flank, and Patson Daka led the line in place of Kelechi Iheanacho.

Facing Liverpool for the third and final time this campaign, Rodgers had struck gold in the first two meetings with a 4-4-2 diamond shape. Transitions through a duel strike force had proven to be fruitful in the Carabao Cup, handing Leicester an early two goal advantage. Meanwhile, a deep but centrally compact block held out for the first 50 minutes in the reverse league fixture to frustrate Klopp’s men.

What’s more, the Leicester manager was willing to change tact in both matches. In the cup, an injury forced him to turn to a 5-3-2 block that ultimately conceded too much ground, whereas a broader 4-5-1 block, forming from a 4-3-3 system, hit the right notes at the King Power Stadium six days later.

In a tactical duel full of twists and turns, it was no certainty how the away team would line up. In the end, Leicester set up in a 4-2-3-1 formation. Spare a few phases of higher pressing the guests dropped off into a 4-4-1-1/4-4-2 medium block. Here, Maddison and Daka formed the first line of the defense.

Controlling the lion’s share of the play, Liverpool showed their usual concepts in their 4-3-3 offensive structure. Roberto Firmino roamed in the gaps between the midfield in Leicester’s block. Drifting from one halfspace to the other, acting deeper than the wingers, he offered a more ball dominant presence to the left of the attack. If in doubt, he could turn outward to the flank, finding a deep central midfielder or a fullback to break pressure and keep control of the ball. The room to either side of Maddison and Daka was a safe space that served as a basis for calm ball circulation from the hosts. 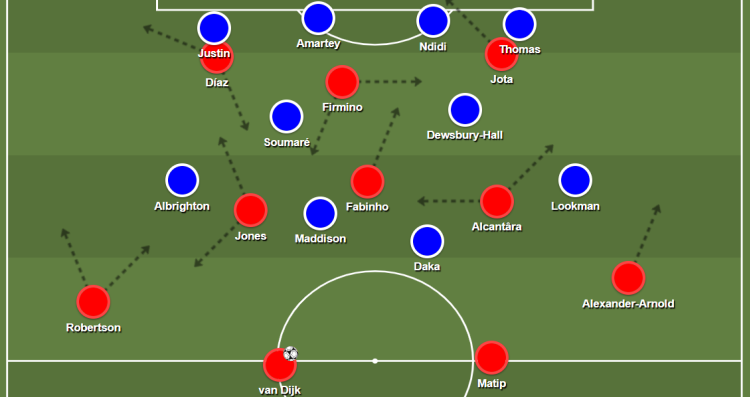 Liverpool’s 4-3-3 offensive structure. Firmino roams deeper than the wingers, Fabinho occasionally moved much higher than the pair of eights, and Andy Robertson attacked the halfspace frequently.

As Klopp’s men continue to evolve, Trent Alexander-Arnold has found more license to create from the inside channel this campaign in a polyvalent role. However, what was striking in this game was how much Robertson moved into these zones from the left. Acting more aggressively than the right back, he worked in tandem with the new man Díaz, who looked at home in the system despite only being at the club for a matter of days.

Over time, Thiago has acclimated to the system, adapting aptly in this game to the role of Fabinho. From time to time, the defensive midfielder pushed higher from his spot at the base of the middle of the park, loading the right side of the pitch. In these situations, Thiago picked his moment to support the back four and connect the play to the ball far zone of the field. Jones could find himself too high or broad in similar scenarios, but his outfit’s automatisms largely pinned back the visitors.

Yet, Liverpool rarely threatened the goal for all their dominance. In a similar vein to the duel in December, Leicester kept a foothold in the contest. Likewise, set-pieces would be decisive here. Where throw-in routines earned a penalty in the reverse fixture, corners were a blatant source of danger. Van Dijk continued to break from the first phase of deliveries, soon punishing the guests.

In the 34th minute, the deadlock broke. Off the back of a deflected shot from Firmino, Alexander-Arnold whipped in a cross from the right flank to the edge of the six yard box, where van Dijk towered above James Justin. Peter Schmeichel parried the headed effort but, in dueling aerially with van Dijk, the right back left Jota free. The forward then gleefully tapped home the rebound: 1-0.

Pouncing to put us ahead 🇵🇹

The advantage sparked Liverpool into life in the final third. Half time arrived at an opportune moment for Rodgers’ men, but could their manager muster the tactical acumen to turn the tide after the break?

Keen to kill off the contest, Klopp made a double substitution on the verge of the hour mark. Jones made way for Harvey Elliot, who played in the Premier League for the first time since his ankle dislocation against Leeds in September, and Salah swapped with Firmino. The forward featured in his usual role as the right winger, pushing Jota in the role of the striker.

Thiago now swapped over to the left of the three in midfield, staying deeper than Elliot on the right. Meanwhile, Jota often dropped off from the center to the left halfspace, still generating overloads on that side of the pitch. Leicester offered even less on the ball than they did in the first half, teeing up the hosts to take a crucial win. Liverpool’s persistence paid off in the dying embers of allotted time.

In the 87th minute, Díaz drove once more into the box, drawing a tired lunge from Albrighton, who prodded the ball into the path of Matip. The central defender stabbed a pass through to Jota, whose rasping strike crept through the reach of the goalkeeper to double the margin of lead. Game over.

In the context of a two horse race, the 9th of April, when a trip to the Etihad awaits, is a seminal date. Till then, however, Liverpool have a Carabao Cup trophy and place in the last eight of the Champions League to fight for, forcing them to focus on matters closer to hand. In any case, it is a credit to Klopp that his men have kept winning in the absence of two of their top goal scorers, and he will look to keep up that record on the road at Burnley.

Rodgers would have yearned for a reaction to the humiliation of the cup defeat, and he got what he wanted— partially. On the one hand, Leicester stayed in the contest for much of the duration of the match. On the other hand, they never really looked as if they would threaten Liverpool’s stability from the possession they had. Already 13 points adrift of the Europa Conference League playoff spot, and closer to the bottom three than the top six, the Midlands outfit are no closer to getting back on track.